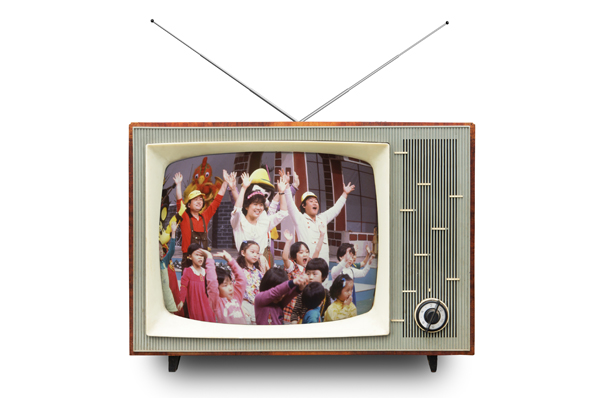 “Bbo-Bbo-Bbo,” the Korean version of “Sesame Street,” was scrapped earlier this month. The children’s show had been broadcast for 32 years. [JoongAng Ilbo]

We all have our firsts: our first dog, our first friend and our first teacher. Although everyone has different lives and experiences, Koreans growing up in the 1980s share a common first: the children’s TV show “Bbo-Bbo-Bbo.”

“Bbo-Bbo-Bbo,” which means “kiss, kiss” in Korean, began airing on May 25, 1981. It was the first children’s TV show broadcast on MBC. The show woke up not only its target audience ? preschoolers ? but also soldiers, college students and even rank-and-file workers.

“It wasn’t merely a show for children, but it was loved by almost all Koreans,” recalled Wang Young-eun, the first host of “Bbo-Bbo-Bbo,” when she appeared on a talk show on SBS two years ago. She hosted the show from its inception until 1984.

Hosts of the children’s TV show were nicknamed Bbo-mi eonni, meaning sister Bbo-mi. Although Wang relinquished the title to her replacement 29 years ago, the 50-something TV celebrity is still dubbed Bbo-mi eonni.

Average viewership of “Bbo-Bbo-Bbo” once hovered around 10 percent during its heyday in the 80s. Given that many of today’s prime-time drama series often end with less than 10 percent of viewership, the show was highly popular.

“I remember one soldier running away from the Army to meet me. There is another anecdote. I was caught by the police because I violated the speed limit, but the police turned a blind eye. He knew I was on my way to the set,” said Wang during the talk show.

The show was a sure-fire platform to success for both young female entertainers and child actors looking to make a name for themselves.

G-Dragon, a member of the boy group Big Bang, and actress Shin Se-gyeong from the drama series “Deep-rooted Tree” (2011) are just a couple of A-list celebrities who appeared on the show as child guests.

Entering the 90s, however, the Korean version of “Sesame Street” started losing ground with the advent of more TV shows and as children engaged in more diverse activities.

After years of declining ratings, the nation’s second longest-running show faded to black on Aug. 7, making way for a new children’s show that is heavily focused on education aimed at children between 4 and 5.

MBC announced its decision to scrap “Bbo-Bbo-Bbo” three days before it last aired. 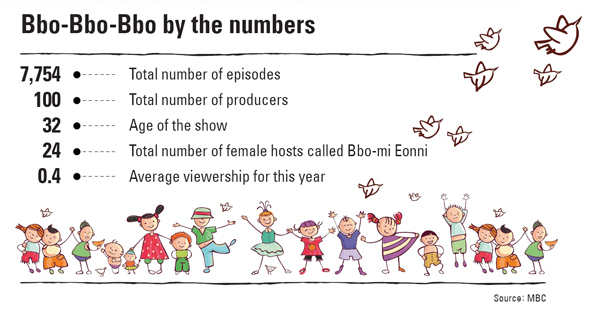 The news came as a shock to people who grew up watching the show. One of them was G-Dragon, who wrote on his Twitter page, “I’m saddened. Good-bye, ‘Bbo-Bbo-Bbo.’?”

The scrapping of “Bbo-Bbo-Bbo” was somewhat expected, though. The show, which once aired five days a week, became a weekly show in 2003 as it kept losing viewers, but parents and civic groups conducted a letter-writing campaign and the decision was overturned a few weeks later. It was around this time that the show’s ratings fell to less than 1 percent on average.

Starting in 2007, the name of the show was changed to “Bbo-Bbo-Bbo Ah-yi-joa,” and its time slot moved from early morning to 4 p.m., when a majority of Korean children are still at day care centers or kindergartens.

MBC, however, said it wanted to meet the needs of the times.

“The overall living environment has changed a lot over recent years,” said MBC in a statement earlier this month. “We thought it is time to bring changes to educational programs for preschoolers.”

“Ttok? Ttok! Kids’ School” the newly launched program that has replaced “Bbo-Bbo-Bbo,” is packed with educational materials ranging from science, language to math, which comes as no surprise in a country where a plethora of educational programs are aimed at infants who cannot even sit up.

According to the Korea Institute of Child Care and Education, parents with children between 36 months and 72 months shelled out 2.17 trillion won ($1.9 billion) for private education last year. Children start to learn hangul (the Korean alphabet), English, math and science as young as 8 or 9 months. Parents with infants younger than 36 months also spent 550 billion won for education last year.

Given the all-time high education craze, the demise of “Bbo-Bbo-Bbo” is understandable. Other children’s shows airing on KBS and SBS also earn less than 1 percent of viewership.

“Most families leave their kids at day care centers or kindergartens and the kids come home after 5 p.m. or 6 p.m.,” said Han Seok-hyun, an official working at a broadcasting department at YMCA. “If these broadcasters really care about children’s shows, they should move the time slots from 4 p.m. to later hours.”

“We already have plenty of educational programs for young kids and there is no reason for MBC to join the fray by scrapping its long-running show,” said Han.

Experts say broadcasters should refrain from adding too much information and education into children’s TV shows.

“There are, of course, positive effects when educating kids with these education-oriented TV shows,” said Han Yu-mi, a professor of early childhood education at Hoseo University in Asan, Chungcheong. “But if kids are accustomed to learning with visually stimulating videos, they will eventually lose interest in less entertaining studies such as reading and discussion.”

There is another problem, according to YMCA.

“Not every TV show should be aired for a long period of time, but the nature of TV shows for children is a bit different from others,” said Han. “There has to be a proper balance between sheer fun and education.”

But finding a happy medium between the two is not something broadcasters can easily achieve, Han said.

“Bbo-Bbo-Bbo” could have achieved its current format by communicating with audiences after many trials and errors, but it is quite hard to expect a new show to do it in a short period of time,” continued Han.

For example, another long-running show in the U.S., “Sesame Street,” airs on PBS Kids Sprout. The show has stirred up controversy several times for bringing up touchy issues such as homosexuality, but it has upgraded its content and format several times in the past 44 years.

Also, children’s TV shows now have far more competition. About a dozen cable channels bombard children with all kinds of shows for 24 hours every day. With a few touches, ubiquitous tablet PCs and smartphones also provide things to watch and enjoy all day long. 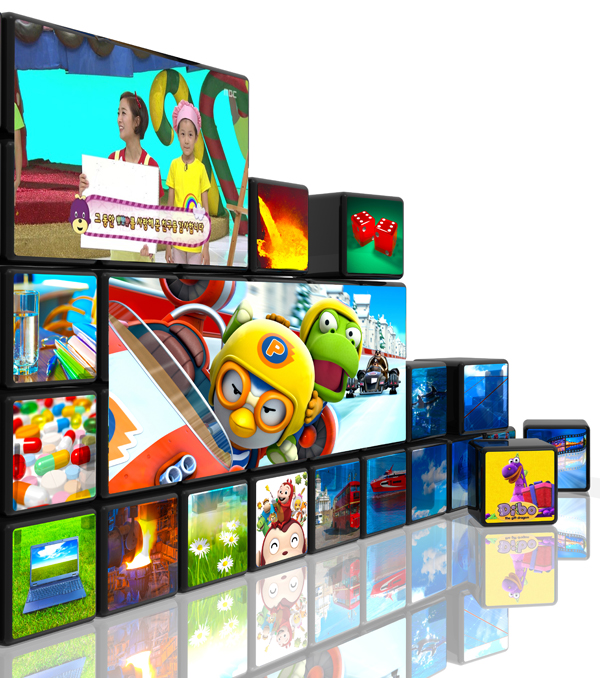 With a short caption that reads, “Thank you for loving ‘Bbo-Bbo-Bbo,’?” the nation’s second-longest running show came to an end. [Screen capture]

With abundant educational and entertaining content, Lee Eun-jeong, the team head of the children’s department at EBS, said many approaches are needed.

“The life cycle [of children] has changed a lot, so we decided to change. Starting next month, we will air more shows until 8 p.m.,” said Lee.

Since EBS is the state-run education broadcasting network, it has a far higher number of TV shows for children. For example, KBS, MBC and SBS air one or two children’s shows each day, but EBS offers nearly 20 shows for preschoolers every day from 7 a.m. to 6 p.m.

“We also develop not only TV shows but other related additional products for children from the planning stage. For example, we develop smartphone apps or books so that children can get access to our contents through various mediums,” added Lee.

Narrowing their focus is another way for children’s programs to appeal to picky parents. “Moya Moya,” one of EBS’ vocabulary programs, targets toddlers who are between 24 months and 36 months.

“The program was pre-produced after yearlong planning and preparation, working with early education experts,” said Lee.

EBS also differentiates itself from other channels by introducing new formats.

One of them is “Tell Me Bong-gu.” Revolving around the 7-year-old protagonist, Na-young, the show closely follows the little girl’s life. Although she is only 7, she runs into trouble every day. In one episode, she doesn’t feel like playing with her friend, who plays in her own way. Na-young wants to go home but she doesn’t know what to say without hurting her friend. So, she asks for tips from her gorilla friend, Bong-gu. By featuring a child actress who is half-Korean and half-Brazilian along her Brazilian mother, the show also addresses multicultural issues.

There are other shows with new formats. One of them is a documentary titled “Life Without Mother,” in which children literally live without their mothers for three days.

The defunct show titled “Animal Journal” was a program in which children audience members could adopt pets through the show and raise them for a certain period of time. By feeding and nursing animals, children learned about responsibility and love for them.

“After all, what we need is to try this format and that format. But it is almost impossible to expect major broadcasters to do that,” said Lee. “Because it takes a lot of time to plan and research, the children’s shows are not lucrative at all because advertising costs are really low compared to other shows.”