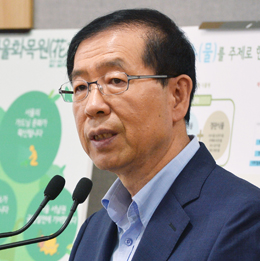 A large botanical park is set to be created in the Magok area in western Seoul, one of the last undeveloped neighborhoods left in the teeming metropolis that is the Korean capital.

The Seoul Metropolitan Government said yesterday that the park, tentatively named the Seoul Botanic Park, will be created on about 50.3 hectares (124.3 acres) of land in the district by December 2016. It will be twice as big as Yeoudio Park and a bit smaller than Seoul Children’s Grand Park (56 hectares) in Gwangjin District.

About 5,000 species of trees, flowers and herbs will be planted in an area tentatively named the Plant Culture Center, which will include diverse facilities like greenhouses, a plant library and a center where citizens can learn how to garden. The city government said it will increase the number of plant species to 10,000 by 2028. By comparison, the Korea National Arboretum in Pocheon, Gyeonggi, currently has a total of 3,444 species.

“Cities in advanced countries, like New York, have large arboretums in public parks, but such facilities are mostly outside of urban areas in Korea,” Seoul Mayor Park Won-soon told reporters during a press briefing at City Hall yesterday. “We wanted to provide a space that can provide leisure and rest within a city that’s full of gray concrete buildings.”

In 2008, the city government announced a project called Waterfront, which would develop the area as an international tour attraction with facilities for cruise ships and yachts. That idea was highly controversial because of potential pollution problems and the estimated 430 billion won ($384.9 million) price tag.

The city government said in May 2011 that this park will replace the Waterfront project. The cost is projected at a mere 153 billion won.

“We expect this park to be the best botanical garden in Asia, and to improve the living environment for many people,” said Mayor Park.