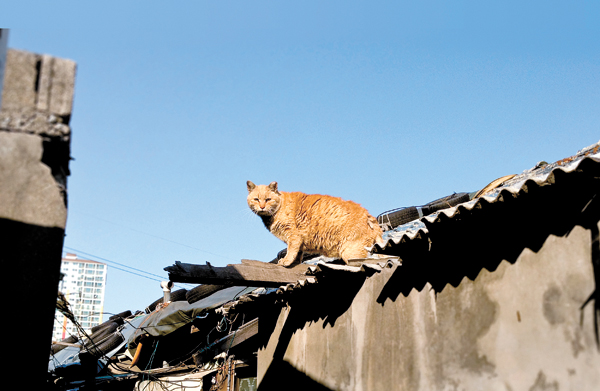 Cat lovers and those who consider them like vermin are divided about how to deal with Seoul’s estimated 200,000 stray cats. Provided by Korea Animal Rights Advocates

The stench is unmistakable: freshly dug-up trash bags containing a medley of household refuse. Garbage is scattered everywhere around the designated trash zone at the apartment complex in Yeomni-dong in Mapo District, western Seoul. But at least the problem is getting better.

“There are definitely fewer cats these days,” said Mr. Lee, the caretaker of the complex who has to clean up the mess.

“But still, they make such noise,” he complained, pointing to a fresh wound on his knee that he got from a fall after trying to shoo away a noisy cat at midnight.

They make a mess, howl throughout the night and some are even dangerous - stray cats are a big problem in many of Korea’s cities. 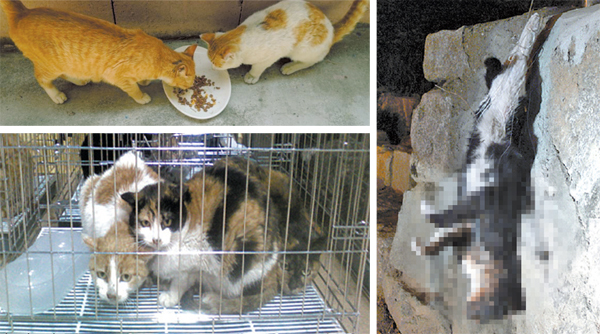 Cat conundrums (clockwise from top): “Cat moms” provide food and other help for street cats, which rarely live beyond 5 years of age. Provided by Korean Animal Welfare Association This cat found in Seodaemun, central Seoul, was tortured and burnt to death. Provided by KAWA Under the city’s TNR initiative, cats are trapped, then taken to a veterinary clinic where they’re spayed or neutered.Provided by The Korean Organization for the Protection of Cats

Some animal rights groups estimate there are 200,000 stray cats on the streets of Seoul alone.

Many people hate them. In an infamous case, a man in the countryside set his large pungsan dog on a small stray kitten, posting a video of the killing online in December. He was fined 700,000 won ($625) for the attack, but he likely won’t be the last to take out his hatred of cats in such a gruesome way.

Others are trying to change the all-too-common view that stray cats are like vermin. The increasing numbers of cat-lovers are trying to feed and look out for the homeless cats running wild through the streets. They’re often even called “cat moms.”

“Some people tell us not to feed them, and some threaten to poison our cats,” said Kim Jin-hee, a 60-year-old cat mom who has been watching out for felines in her neighborhood in Guro, southwestern Seoul, for over a decade. She also founded the Korean Organization for the Protection of Cats.

“Cats have had a bad rep in Korea,” explained Jung Jina of the Korean Animal Welfare Association. “There are a lot of people who don’t like them or are scared of them.”

Jung said those prejudices come from “false media reports and shamanistic thinking” that still prevails in Korea, considering cats to be carriers of disease and evil spirits.

Where did they come from?

Although most of the street cats you see are feral, cats used to be more accepted, especially in the countryside.

“Back when I was a kid, cats were kept as pets to catch mice,” said Kim.

But as Korea became urbanized, people swapped houses for apartments and no longer needed cats. The problem, though, was that the cats didn’t have anywhere to go in the concrete-covered city.

“In the wild, they would hunt for food, but cats in the city can’t find food or water, except in garbage bags,” said Jung.

Along with the food problem, the bright nighttime lights of the city are a problem.

“When cats are exposed to bright lights, they get aroused and of course their mating calls make them even less popular with people” explained Jung.

On average, street cats live only five years - most of them die in car accidents.

Some people dislike cats so strongly they try to eliminate them themselves, often using rat poison. But cats who eat rat poison suffer horribly, going blind and stumbling around for days before their hearts bursts.

Until a few years ago, the only method used in Korea to control urban cat populations was extermination.

But protests by animal rights groups eventually led some districts to look for alternatives. Increasingly, trap-neuter-return programs (TNR) have become the answer.

As the name suggests, this program includes trapping stray cats, taking them to be neutered and then releasing them back into the city.

“It’s been proven that in a place like Seoul, killing them off or moving them away is not a practical solution,” said Jeon Jin-kyung, director of the Korea Animal Rights Advocates.

Currently all 25 districts in Seoul receive support from the city government to carry out a neutering program on stray cats with affiliated clinics. The benefits, if executed right are appealing: De-sexed cats don’t prowl the streets looking for a mate, are less aggressive and they cannot reproduce.

But even this approach has divided cat loves and haters alike.

While everyone agrees that the TNR program is a step forward, many complain about how those programs are being implemented around Korea.

“We don’t even know if the cats are released back to their home territory,” said Kim, who complains that the government and people who run TNR programs are uncooperative.

“They come at night, they never consult us and then just throw the cats into the truck,” said Kim.

Yoon Sung-hwan, the local official in charge of the TNR program for Mapo District, western Seoul, admits that everything is not perfect. Since he’s been overseeing the project, more than 450 complaints have been filed and Yoon said it’s hard to answer every call. As each district tries to curb the number of cats, cat moms and activists are concerned about the government’s seeming indifference.

“They just see it as a solution to people’s complaints,” said Jeon. “They don’t care about what happens after.”

“At the end of the day, it is a business that someone profits from,” Kim added, recalling a 3-month-old kitten that was rounded up. Too young for neutering, it did not survive the operation.

Kim said that 10 percent of the cats rounded up by the city die following being spayed or neutered because of lax controls and a lack of concern about the health of the animals.

Kim wishes the city would work with cat moms more “because they know their cats.”

While TNR programs have been successfully introduced in many countries, Kim said that those in Korea need better standards and accountability.

“There can be infections, hormonal imbalance and such,” said Kim.

It’s also important to return the cats to the same territory where they came from, so new strays don’t just take their place.

“If a neutered cat gets released somewhere else, that means another cat will move in,” said Kim.

But activists do agree that local stray populations should not be allowed to grow.

“In order to give the street cats proper care and minimal living conditions, we can’t afford to see their numbers increase,” said Jeon.

From a city management perspective, no one can argue that TNR hasn’t helped manage Korea’s stray cats.

“I think TNR really is the optimum choice at the moment,” said Mapo’s Yoon, who does admit that the local system could be improved.

But despite the district’s efforts, Yoon noted that many residents aren’t satisfied with just neutering wild cats.

“The problem for many residents who complain is that the cat are still there.”

Other cities and districts are undecided whether to carry on their TNR programs, given their lukewarm reception from citizens.

“It’s true that some citizens think that they’re a waste of tax money,” said Shin Hye-in, the city official in charge of the TNR program in Gyeongju, North Gyeongsang. “We are giving it until the end of this year to decide whether to go on with the program.”

Although Gyeongju was one of the first regional cities to implement the program, the cost of about 100,000 to 200,000 won per cat is not sitting too well with some taxpayers.

While TNR isn’t perfect and is no quick-fix to the problem of stray cats, many activists hope the government continues, as the alternative is much worse.

Other options, such as contraceptive vaccines, just are not ready.

“If you look at this negatively, the problem is not going to go away,” said Jeon. “We need to focus on doing TNR right.”