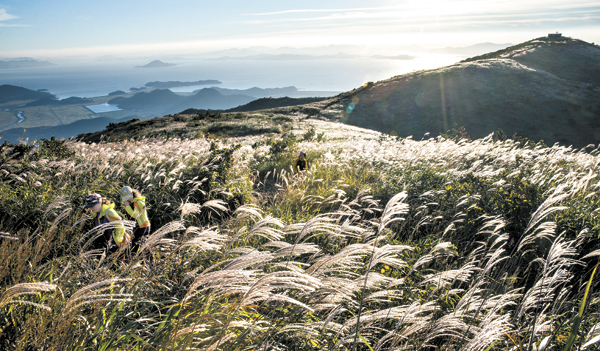 Mount Cheongwan in Jangheung, South Jeolla, boasts one of the best flame grass displays from around the nation. By Shin Dong-yeon

Autumn is here. The breeze is chilly and the sky is clear. Mountains are decked out in their fall colors and are calling out to hikers.

Most people associate autumn hiking trips with the turning of leaves; maples in particular. And in places like Mount Sokri and Mount Gaya, the foliage has already begun its colorful transformation. It won’t be long before the whole nation is painted red and brown. But under the shadow of the colorful leaves, flame grass also beckons. If the autumn trees with their red and gold leaves can be likened to a breathtaking display of fireworks, then flame grass is surely like the Milky Way that lights up the night sky with its subdued beauty.

The flame grass plant blossoms early in the season - beginning in September - and lingers until early next year.

Unbeknownst to most, flame grass is a flower - the flower of fall.

Thus a trek through the mountain where these plants lie is more like attending a flower festival.

First the flowers are purple. Over time they turn brown, then silver, and eventually white. Throughout the day, depending on sunlight, it’s not uncommon to see an array of colors in a flame grass bush. It’s probably the only flower that you can’t get sick of.

From October to November, the plants are in their prime. Flame grass festivals usually take place during this time. Some of the most renowned festivals are at Haneul Park, Sangam-dong, western Seoul, from Oct. 18 to Sunday; Mount Myeongseong in Pocheon, Gyeonggi, from Oct. 9 to Sunday; and Mount Mindung in Jeongseon, Gangwon, from Sept. 27 to Nov. 3.

“In early November when the pollinated flowers blow in the wind, it looks like white feathers flying around, and it’s just beautiful,” said Oh Jong-sik, a cultural interpreter at Mount Hwawang in Changnyeong.

Although flame grass is often mistaken for reeds, it is different. Reeds only grow near water, while flame grass can grow on dry land and up high on mountain ridges. In fact, to see some spectacular flame grass, you should expect a bit of a climb.

The two plants also have very different flowers. Whereas reeds have an ample supply that grow on its stalk, flame grass flowers aren’t as plentiful.

And the more sunlight the flame grass gets, the more colorful it turns.

There are many locations to see flame grass in all its glory, but two of the best are Mount Cheongwan in Jangheung (723 meters, or 2,372 feet), South Jeolla, and Mount Hwawang (757 meters) in Changnyeong, South Gyeongsang.

From top to bottom: Mount Cheongwan is famous for its unique rock formations. On a clear day, you can see Mount Halla on Jeju Island from Mount Cheongwan. A Bongsu lookout stand.

There is no better time of the year to visit Mount Cheongwan. The eager flame grass has already begun its transformation.

Dancing in the wind, flame grass makes audible noises, and with the view of islands from the top of the mountain the scenery is truly breathtaking.

There is no need to climb to the top as the islands are visible from several points. Trekkers would be forgiven for thinking they were in heaven as the path that winds up and around the summit looks like a dream. From afar the grass looks like a tranquil sea.

As one of the five renowned mountains of the Honam (southwestern Jeolla) region, along with Mount Jiri (1,915 meters), Mount Naejang (763 meters), Mount Wolchul (809 meters) and Mount Naebyun (510 meters), Mount Cheongwan is scenic all year long. Even without the flame grass, the odd rock formations strewn across the mountain makes it an interesting hiking destination. From the top you can also see Mount Wolchul and Mount Mudeung. On a clear day, you can see Mount Halla on Jeju Island. Atop Yeondae Peak - the highest point of the mountain - a beacon platform has been restored. During the Joseon Dynasty (1392-1910), Mount Cheongwan was the next point of contact for signal fires from Jeju.

There are more than 10 trails that wind their way up the top.

The fastest route is the trail that starts from the car park of Tap Temple. From there you walk past Guryong Peak, the Hwanhee lookout spot and Dalk Peak until you reach Yeondae peak (2.8 kilometers). The trek takes about 1 hour and 20 minutes.

But the more popular route is from the town of Gwansan to Jangcheonjae. This trail takes you past some interesting rocks and stones that the mountain is famous for. And although the trail is longer (2.5 hours), it’s worth it. Overall, Mount Cheongwan is not a high mountain, and in five hours you can examine all of its nook and crannies. But an early start is recommended for the best flame grass viewing.

To see the sun rise from behind the islands and turn the grass gold is priceless. As the sun moves, the color of the flame grass changes constantly.

It goes without saying that you need to bring a camera when you climb this mountain. From one spot, you’d be surprised at the range of photos you can get, depending on the time of day. Two of the best snap sites are Hwanhee lookout and Dalk Peak, where you can capture Yeondae Peak against the islands.

Mount Hwawang of Changnyeong in South Gyeongsang where a scene from the TV drama “Dae Jang Geum” was filmed.

Along with the Youngnam Alps, Mount Hwawang is the favorite spot in this area for flame grass spotting. The white background against the crater is a sight to behold. It’s also not a long hike up to the flame grass plains on the top.

“In this brightly lit fall day, the flame grass of Mount Hwawang/ They keep talking among themselves,” wrote poet Hwang Dong-gyu in “Brightly Lit Fall Day.”

Hwang probably visited the mountain around this time of year when he penned those lines. Just as he said, there’s no time of year that the flame grass dazzles as much as now. Like little bits of candy floss on sticks, the flowers shine brightest next month.

Mount Hwawang’s formation is a bit unusual, too. Most flame grass fields are either flat or have small bumps but Hwawang is a crater, the result of a volcano eruption. One benefit is that no matter where you are on the mountain you get an even view of the 240,000 square meters (59.3 acres) of grass.

Most visitors choose the path that goes up where the Okcheon ticket booth is.

After two hours, you arrive at the Mount Hwawang fortress wall. As you make your way through the east gate you can see the flame grass plains in one glance. From here, you can make a right toward the summit, or turn left to Bae Rock or to the southern gate. To circle the entire fortress takes about an hour (2.5 kilometers).

As you make your way to Bae Rock, you’ll recall the scene in the TV drama “Dae Jang Geum,” where actress Lee Young-ae follows Officer Minjong up the mountain.

As you walk away from the fortress you face an uphill climb on a path nestled in between the flowers.

“There are two kinds of flame grass: water grass and mountain grass. The mountain grass is thick and long and thus masculine, while the water variety is short and slender and quite feminine,” said Oh, the interpreter.

He added that because the flame grass leaves are sharp, it’s easy to cut yourself when you touch them. After a 10-minute trek you arrive at Bae Rock, a sight that is wrought with painful memories. In 2009, a fire broke out among the flame grass, and tourists jumped off the rock to avoid it.

From here to the western gate only takes five minutes, but from the gate to the top of the mountain it’s a strenuous 2.5-kilometer trek. Once you’re there, it’s worth it.

From the top you can see not just Changnyeong Town but as far as Upo Swamp. To the north lies Mount Biseul of Daegu, while to the west you see the Nakdong River flow gently.