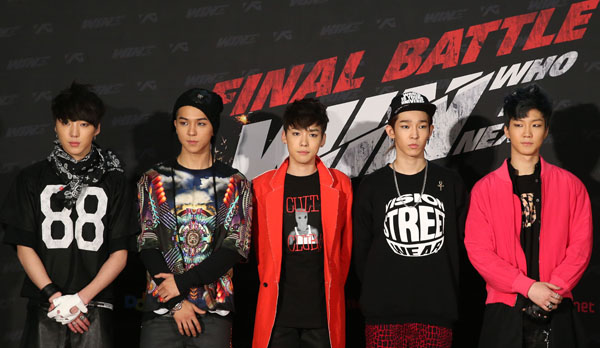 The members of Team A, the winner of Mnet’s survival program “Win: Who Is Next,” pose before the final battle last Friday night. [NEWSIS]

And the winner of the contest to become YG Entertainment’s next K-pop group is … Team A!

After 10 grueling weeks of cable channel Mnet’s survival program “Win: Who Is Next,” the winning team was finally selected Friday evening, leaving the losers to their tears and the realization of how close they came to stardom.

“Win” divided 11 trainees from YG Entertainment into two teams - Team A and Team B - and pitted them against each other for the chance to become a K-pop group called Winner.

Interest in the show was high because it is similar to the process that YG Entertainment used in 2006 to create Big Bang, one of the most popular groups in K-pop.

Some of the overseas fans even visited Korea to root for their favorite team.

The winner was chosen by viewers in two rounds of voting, both incredibly close. Team A won the first round by 2.74 percent and the second round of voting by just 0.52 percent.

Before the final results were announced, both teams pledged to abide by the decision.

“If I enjoy the contest without regret, I don’t think the result will matter,” said B.I, the leader of Team B whose real name is Kim Han-bin, before the last competition.

All of the trainees were tearing up even before the winner was announced due to the stress and struggles of the 10-week contest, not to mention the years of work they had put into training before that.

Even Yang Hyun-suk, the founder and main producer of YG Entertainment, was on the verge of tears. Before the show, Yang noted how he had grown fond of both teams and had been genuinely surprised to learn about the backstories of several members. He also said that the best part of the program was how all 11 members learned how to tell their stories through their music.

As the big winners, the guys in Team A will plunge into a PR whirlwind, starting out by opening for Big Bang during the group’s six major concerts in Japan in November.

YG Entertainment said that the group’s debut album should be coming in December or January, but first they will release four songs online today.