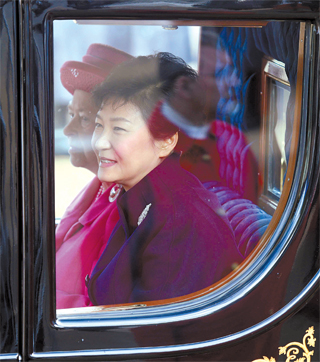 LONDON - President Park Geun-hye marked the start of a three-day state visit at a residence of Queen Elizabeth II with a ceremonial Horse Guards Parade outside Buckingham Palace, Tuesday at noon London time.

The Korean president arrived late Monday, wrapping up a three-day visit to Paris; the first stop on her eight-day Europe tour.

Park was taken from her residence to the Horse Guards Parade where Queen Elizabeth II and her husband, Duke of Edinburgh Prince Philip, were waiting five minutes prior to the start of the ceremony, along with British Prime Minister David Cameron and Foreign Secretary William Hague.

A 50-piece military band played alongside 80 Royal Guards in their distinctive crimson red jackets and tall black bearskin caps, with 120 cavalry on black horses lined up behind creating a magnificent scene. A total of 41 salutes were fired at Green Park, 1.6 kilometers (1 mile) west of the venue, and at the Tower of London, 5.6 kilometers east, upon Park’s arrival.

The head of the Royal Guard reported to Park in Korean - it is traditional to speak in the language of the state visitor - that the march was ready, and she mounted a carriage drawn by six horses to accompany Queen Elizabeth and Prince Philip to Buckingham Palace.

Reminiscing about the Queen’s visit to Seoul in 1999, Park expressed her gratitude for the invitation in this “special and meaningful year,” which marks the 130th anniversary of diplomatic ties between South Korea and Britain.

At 60 years and counting, hers is the second-longest reign of a British monarch after Queen Victoria, who reigned for 63 years and seven months. Elizabeth II’s coronation took place at Westminster Abbey in 1953.

One of her four children, Prince Charles of Wales, is next in line to the throne.

Park is the second Korean president to make a state visit to Britain following Roh Moo-hyun. The British government sent an invitation to Park right after her election.

Park received several invitations from the British government while she was a lawmaker, but a visit was never realized for varied reasons, according to a Blue House official.

“The state visit underscores the deep friendship between the two allies,” he said. “Britain is particularly interested in the fact that Korea has seen its first female president.”

After the 10-minute greeting ceremony finished, Park attended a lunch hosted by the Queen with some 50 other guests. The Queen then led Park on a tour of the royal collection in Buckingham Palace.

The Korean president was scheduled later in the afternoon to attend a groundbreaking ceremony to build a monument for British soldiers who died in the 1950-1953 Korean War and to lay a wreath at the Tomb of the Unknown Warrior in London’s Westminster Abbey, a monument dedicated to service members who died without their remains being identified. Britain dispatched some 56,000 soldiers during the Korean War.

She was then scheduled to go to Parliament to have talks with some 100 British lawmakers, followed by a 20-minute separate meetings with the Labour Party leader Ed Miliband and Liberal Democrat leader Nick Clegg.

As the last event of her first day here, Park was to be treated to a state banquet at Buckingham Place hosted by the Queen. The banquet in honor of the Korean president was to have 200 guests, including British Prime Minister David Cameron. The president is staying at a residence of the British monarch, a tradition for a visiting head of state.