Burial was a dominant funerary practice during the Joseon Dynasty (1392-1910), but that is rapidly changing. [JoongAng Ilbo]

In a nation where taking care of your ancestors after they pass away has long been nearly as important as how you treat them in life, funeral customs are among Korea’s most important traditions. But after hundreds of years of burying the departed and tending their graves, Koreans have switched their preference to cremations in barely a generation.

“Cremation was considered unfilial in the past, so people didn’t opt for it that much,” said Sunwoo Seung-tae, the head of operations for Seoul Seunghwawon, a city-run crematory located on the outskirts of Goyang City, Gyeonggi. “We had 16 crematory units, but most of them were idle and [a day’s] cremations usually ended around 2 or 3 p.m.”

By the end of the 1990s, however, as the nation’s cemeteries grew increasingly full, the government changed its laws to make new graveyards more difficult to set up and discourage burials.

As a few society leaders wrote in their wills that they wished to be cremated, the trend accelerated.

“As more people chose cremation from the early 2000s, we added seven more units in 2000 and all our cremators worked at capacity from 7 a.m. to 6 p.m. every day,” Sunwoo said.

As demand for cremation soared, it grew harder for families to secure a cremator, and they often had to drive hours outside of Seoul to find an available unit. Other times, people would extend the funeral time for an extra day or two, although the opening last year of Seoul Memorial Park, a crematorium in Wonji-dong, southern Seoul, has helped to ease that pressure.

It’s a major change from how Confucianism dictated bodies be treated for hundreds of years, strictly forbidding cremation.

“People used to think cremation was a cruel act, like killing a dead person one more time,” said Park Bok-soon, a professor of funeral science at Eulji University. “In addition, it was widely associated with how the corpses of the homeless were treated, or people who were killed in tragic accidents.”

Last year, 74 percent of the dead were cremated in Korea, according to a report last month by the Ministry of Health and Welfare. The ministry predicts that number will top 80 percent within two or three years. That’s an incredible change from the 17.8 percent cremation rate in 1991.

“Funeral culture rarely changes because it is a basic part of a society, but it only took 20 years for us to move from burial to cremation,” said Park.

While there are still some Koreans willing to pay the steep expenses needed for a better burial site for themselves or their parents, the majority of Koreans no longer think of cremation as a cruel or shameful way of disposing the corpses.

The Korea Institute for Health and Social Affairs, a government-run research institute, conducted a nationwide survey of 3,000 Koreans above the age of 30 in 2011 and found that 79.3 percent of respondents said they wished to be cremated.

The primary reasons given were that cremation is considered hygienic (35.1 percent), convenient (27 percent), manageable (25 percent) and less expensive compared to a burial (4.6 percent). 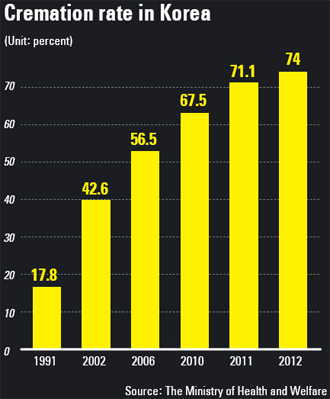 A concrete grave: A clash between tradition and reality

While burial and cremation are the dominant two options now, the funeral culture of ancient Korea used to have more diversity.

Before the Joseon Dynasty (1392-1910), Buddhism was the dominant cultural force, and it has no qualms with cremation. Other funeral customs included aerial burial - allowing bodies to be taken apart by birds - secondary burial and dolmen.

But with the neo-Confucian Joseon Dynasty, cremation and other burial forms were replaced by burials as the predominant funerary practice. Children were expected to live at their parents’ grave site for up to three years, and then continue to maintain the grave site forever.

That clash between the pressures of tradition and the realities of modern society was highlighted earlier this year when people discovered a concrete-covered burial site in Goheung, South Jeolla. Apparently the people responsible for maintaining their family’s hillside tombs found it too difficult to keep traveling to the site and cut the grass, so they just covered all the tombs with concrete.

When pictures of the graves surfaced on the Internet in April, many people lamented the shirking of filial duty, but others said the eerie-looking graves were just a reflection of modern society.

“No young people want to go to their parents’ and ancestors’ graves in the countryside and keep tidying them up,” said professor Park.

There are agencies people can hire to cut the weeds and keep the graves in good condition, but many of them have a hard time recruiting workers to do the job.

“Laborers often get attacked by swarms of bees or snakes as they remove the weeds,” said Oh Sang-hyun, who oversees grave-weeding services at Jindo Forestry Cooperative, a company based in Jindo, South Jeolla. “Almost everyone shuns the work.”

The work is often given to immigrant workers.

“Although we take care of 200 graves, we encourage our customers to open their ancestors’ graves and cremate the remains,” added Oh.

Removing the weeds around the graves is certainly dangerous work. Between 2009 and 2011, 32,714 people were injured while cleaning up the grave sites, according to National Emergency Management Agency.

“It is a worldwide trend, going from burial to cremation as a society modernizes,” said Kang Dong-gu, a former professor of Buddhist culture and fine art in the graduate school of Dongguk University. He now heads an institution which researches the life and death rituals of Koreans.

“It’s a global trend, but there is one thing to which we have to pay attention. The transition took place at an unprecedented pace [in Korea] and it is closely related to rapid social changes.

“For example, an increasing number of single people has fueled the social shift even faster. These single people think, ‘Who will visit and take care for my grave?’” added Kang.

Between 20 and 25 percent of graves have already been abandoned, and the Health Ministry expects that number will grow in the near future.

Left: Cremation was once considered a “cruel” act such as killing a person a second time, but not anymore. It has become the preferred funerary practice of Koreans. Center: Some people now prefer “natural burials” in natural settings. Right: This grave in Goheung, South Jeolla, was covered in concrete, reportedly to make upkeep easier. [JoongAng Ilbo]

In order to keep pace with the surging demand for cremation, the Health Ministry has been building crematories across the nation. In addition to the current 55 crematories in Korea, the ministry plans to build 13 facilities by 2017.

But the ministry also wants to do more to change how Koreans treat death rather than just increasing cremation rates. That is because at the moment, most people choose to keep their family members’ ashes at large columbaria that, while smaller than a grave, still can require a lot of space.

“It is early to say that the funeral culture of Korea is changing,” said Park Gun, a former senior researcher at the Korea Institute for Health and Social Affairs. “Cremation takes 30 percent less physical space compared to burial, but the ashes have to be kept at memorial sites, which also take up space. It is time to think about alternatives to cremation.”

Which is why the Health Ministry is trying to get people to move away from columbaria and instead choose more natural options.

“Our long-term goal is to channel the need for cremation to natural burials,” said Seo Jong-won, an official at the Health Ministry in charge of funerary practices. Seo said the ministry would like people to change to scattering the ashes in the woods or at sea as well as choose “natural burial,” meaning embalming techniques that aid decomposition, along with using biodegradable containers.

Koreans already seem to be making the switch to scattering ashes for cremated relatives. In a 2011 survey by the Korea Institute for Health and Social Affairs, 67.2 percent of people who preferred cremation to burial said they wanted their ashes to be scattered around nature.

Natural burials, however, have been slower to catch on, and only comprise 3 percent of all deaths in Korea.

But the government updated laws in 2008 to make the option easier.

Under the updated laws, one can be buried in the backyard or front yard of a house. Before the revision, the laws didn’t even mention any nature-based options for ashes.

But even the amended laws for natural burials are still restrictive, and many places are still forbidden, such as nearby residential areas, downtown commercial areas and city redevelopment areas.

With the rising demand from its followers who wish to be laid to rest around the temple after their deaths, the temple opened its forest to believers in 2006, so that they could scatter the remains of their families among the trees.

After the funeral practice laws were updated in 2008, however, the forest was no longer an option.

“When we started allowing natural burials in 2006, the funeral law didn’t even mention it,” said Park. “So it was legally OK for us to offer it, but then the government added a single line about natural burials as part of funeral practices when it updated the laws. After the update, the forest has fallen into the category of cemetery, so we had to either refurbish the forest to meet the requirements or shut it down.”

Although the temple forest is not available for woodland burials anymore, families can still visit the forest and pay tribute to their loved ones.

“Cemeteries and columbaria draw clear lines between the dead and the living, but a woodland burial is different,” said Park. “For some, it is a place where you can reminisce about your deceased families. But it is also a place where some can take a break.”