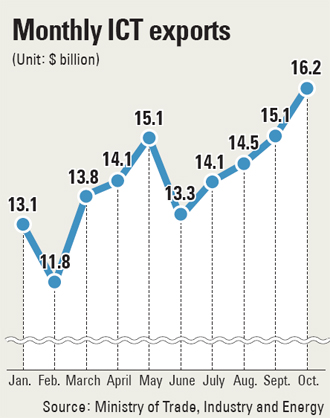 Korea’s ICT exports surpassed $16 billion last month for the first time, backed by the growth of its mobile phones, digital televisions and semiconductors.

According to the Ministry of Trade, Industry and Energy yesterday, a total of $16.2 billion in ICT products was exported in October, up 11.6 percent from the previous month. The nearly $8.5 billion surplus was up 19.7 percent from September.

The country sold $2.9 billion worth of mobile phones last month, 30.5 percent more than in September, and $730 million in digital televisions, up 33.3 percent.

Exports of semiconductors stood at $5.3 billion and printed circuit boards at $2.7 billion each. Lithium-ion batteries contributed to the growth with $440 million in exports.

From a year earlier, total ICT exports for the year stood at $141 billion at the end of October, up 10.6 percent. The accumulated surplus was $74 billion.

By product, exports of premium smartphones like the Galaxy Note 3, Galaxy S4 and G2 totaled $1.7 billion in October, the most ever.

Mobile phone shipments in the third quarter were the highest in the world for the 10th consecutive quarter, the ministry said.

The global market share of Korean mobile phones was 39.9 percent.

As demand for memory chips jumped due to increased use of smartphones, exports of the products soared 43 percent to $2.3 billion last month.

Despite a slowdown in the global TV market, demand for Korea’s smart TVs rose in the past four months, data showed.

Exports to Japan declined for the fifth consecutive month. The figure fell 4 percent month-on-month to $740 million, largely due to the weak yen.

Meanwhile, Korea imported a total of $7.76 billion in ICT products in October, up 4 percent from the same month last year.