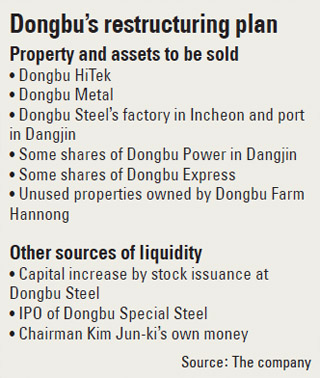 Amid growing concern about a liquidity crisis at conglomerates in the wake of the unraveling of Tongyang Group, Dongbu Group, another chaebol being monitored by the nation’s financial watchdog, came up with a restructuring plan that it said could be a 3 trillion won ($2.8 billion) lifeline.

Dongbu HiTek, a semiconductor maker that Dongbu has ambitiously invested in for more than a decade, will be sold as part of the plan to shore up its fiscal condition, the group said.

Dongbu said it will sell all or some shares in selected affiliates by 2015 and try to lower its debt ratio to 170 percent by then. Among affiliates affected by the restructuring plan were Dongbu HiTek, Dongbu Metal, Dongbu Steel, Dongbu Power, Dongbu Express and Dongbu Farm Hannong.

Dongbu Chairman Kim Jun-ki, who founded the group 44 years ago, also pledged to contribute 100 billion won ($94 million) of his own money toward the restructuring, the group said. His money will be used in particular for a capital increase by stock issuance at Dongbu Steel, it said.

“We decided to accept the financial authorities’ request to expand our self-survival measures and judged that we need to take pre-emptive, intensive measures to improve our fiscal structure significantly,” the group said in a statement.

Dongbu has invested several trillion won in Dongbu HiTek in the non-memory semiconductor sector, but the chip maker incurred losses for 14 straight years after its creation in 1997. Its first quarterly profit was in 2011.

“After putting in enormous investment and efforts over the past 10 years or so, the business of Dongbu HiTek has just been getting into the right orbit, but in order to dispel concern in the financial community over our future investment in the semiconductor sector, we made an inevitable decision to sell it,” the group said.

The group said it will sell Dongbu HiTek after curtailing the amount of bank loans at the chip maker.

The group currently owes 6.3 trillion won to banks, and it said that will be reduced to below 3 trillion won by 2015. The group plans to reorganize its business focus into four areas - finance, steel, electronics and agriculture.

“We see that the economic slump will continue for three or four more years, so with that in mind we will strengthen the competitiveness of our key businesses and bolster the company’s sustainability,” the group said.