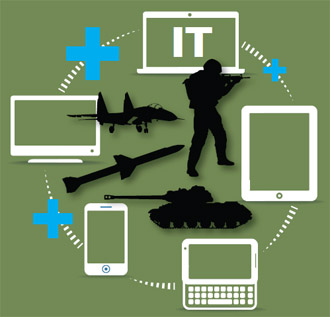 But in the not-too-distant future, such diminutive consumer electronic devices may pack more military might than all that massive hardware, and Korea’s high-tech top guns are aiming for a share of the profits in a growing international defense-IT convergence market estimated at $160 billion in 2012 and projected to be $432 billion by 2017, according to a Korea Evaluation Institute of Industrial Technology study last year.

In challenging the military technical dominance of the United States and Russia, Samsung and other Korean companies have an important ally in President Park Geun-hye, who has made the creation of a creative economy the centerpiece of her administration. 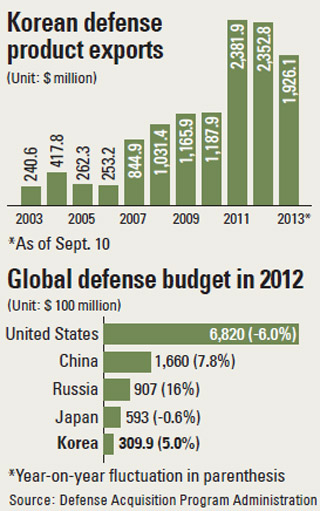 During the exhibition, the Korean armed forces made clear their goal of building a “smart military” in cooperation with private IT companies, led by Samsung Electronics.

“Samsung is the only Korean smartphone manufacturer with technology that enables soldiers to use smartphones at a military base with an unbreakable security system,” said a Samsung Electronics official.

Next month, according to an industry insider familiar with the matter, the Korean Air Force will be the first branch to adopt the company’s security communication module, called Knox, which will be installed on the Galaxy S4.

“Fighter pilots will use the smartphone to search military maps, which previously was done on a larger device like a PMP [portable media player],” said the source.

He adds that the Knox software has been certified by the U.S. Defense Department.

Designed to be compatible with all devices running the Android operating system, the security software can be installed in newer Samsung smartphones and tablet PCs running Android 4.3 Jelly Bean, including the Galaxy S4 and Galaxy Note 2 and 3.

Samsung is negotiating with the U.S. Navy and Federal Bureau of Investigation to supply the software, according to a report in The Wall Street Journal in July.

Korea’s largest mobile telecommunications carrier, SK Telecom, along with its joint venture partner Hanswell, introduced a communication technology applicable to law enforcement and fire departments, as well as the military. It uses the frequency between smartphones and terrestrial trunked radio scanners, also known as Tetra, or walkie-talkie, by conserving voice frequency on smartphone applications.

Unlike existing radio scanners whose communications are limited to a 30-kilometer (18.6-mile) coverage range, the new service covers up to 60 kilometers and only network-registered smart devices can receive communications, according to a Hanswell employee. He said the technology could replace wireless broadband, known as WiBro in Korea and Mobile WiMAX in North America, which is scheduled to go out of service next year.

Kim Heung-nam, president of the Electronics and Telecommunications Research Institute (ETRI), says that in the future, national security will depend on “network-centric war” in which main wartime tasks will involve obtaining, analyzing and sharing information.

Korea especially should focus on boosting research and development in the defense industry in a bid to strengthen its national security like the United States has done.

The U.S. government spent $234 billion on a system to connect military facilities and soldiers wirelessly, according to Son Ki-wook, of the National Security Research Institute.

Park Soo-yong, president of the National IT Industry Promotion Agency, says the era of network-centered war already has begun, with software becoming a weapon due to the convergence of military strategy and technology.

“Research and development will be a new economic growth engine when projects are mutually pursued by private industry and the armed forces. Since Korea is still under a quasi state of war, the defense industry’s growth potential should remain great, and the nation should seize the advantage,” says the Kisdi president.

The United States, United Kingdom and France dominate the global defense industry, accounting for 59 of the world’s 100 largest defense companies. Samsung Techwin (53th), Korea Aerospace Industries (76th), Doosan Defense Systems and Technology (83rd) and LIG Nex1 (85th) were the only Korean companies on the list, according to a study released last year by Sweden’s Stockholm International Peace Research Institute. Seven of the 10 largest companies in the world were American, including No.1 Lockheed Martin and second-place Boeing.

The net global defense budget dropped $90 billion last year compared to the previous year, partially affected by the budget-cutting of advanced nations. The United States reduced military by 6 percent and Japan 0.6 percent during the same period, according to a Defense Acquisition Program Administration study.

The tie between the civilian IT industry and military would become stronger and could grow the defense industry with national training policies like Israel’s Talpiot program, said Kim Dong-wook, president of the Korean Information Society Development Institute. High school students who display exceptional skills in science and mathematics pursue college education in defense technology R&D at Hebrew University in Jerusalem during their mandatory military service, and academic careers continue through research jobs within the military system.

In Korea, the number of persons employed in the defense industry grew an average 6.3 percent annually from 2008 through 2011, whereas yearly growth of the manufacturing industry averaged 1.1 percent during the same time period, according to a study by the Korea Institute for Industrial Economics and Trade released last year. A Security Management Institute study from last month said the defense and munitions industries generated 100,000 Korean jobs in 2012 and are estimated to produce 60,000 additional jobs annually - 40,000 of them at small and midsize companies, through 2017.

“I think the next-generation fighter jet should eventually be produced domestically with our own technology. The key factor in the project is software. At least 10,000 high-skilled jobs can be generated when the nation invests in software,” said Commissioner Nam Min-woo of the Presidential Committee on Young Generation. “The aerospace and defense industries are the last blue ocean for the Korean economy. We can develop them like we self-developed cars and vessels 30 years ago.”