LTE evolves into service of the mobile majority

LTE evolves into service of the mobile majority 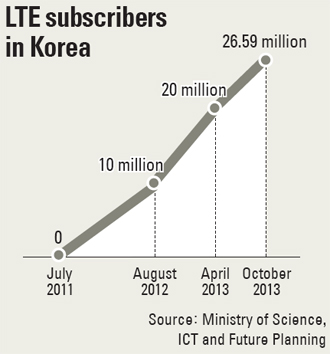 Subscribers to the long-term evolution service, the fastest internet broadband, are estimated to have surpassed 50 percent of mobile phone users in Korea.

According to the domestic telecommunications industry yesterday, the number of LTE service subscribers at the three major service providers - SK Telecom, KT and LG U+ - stood at 27.35 million out of 54.4 million mobile phone users.

The Ministry of Science, ICT and Future Planning, which tracks the country’s information and telecommunications market, has yet to compile data for November. Its October data put LTE subscribers of the three mobile carriers at 26.59 million, or 48.9 percent.

SK Telecom and LG U+ commercialized the LTE service in Korea in July 2011.

The number of LTE subscribers surpassed 10 million in August 2012 and another 10 million were added by April.

The growth of the LTE service comes with the decline of 3G, the previous standard for wireless communications. According to the ministry, 3G subscribers accounted for 48.6 percent of mobile phone users in Korea in January, the first time they went below 50 percent. In October, 3G subscribers numbered only 19.73 million, or 36.3 percent of mobile phone users. As for the slower 2G service, SK Telecom had only 4.04 million subscribers and LG U+ 4.03 million subscribers in October. KT ended 2G service in January.

To lure more customers to LTE networks, mobile operators are competing to come up with more state-of-the-art LTE-related technologies.

LTE networks in use around the world are two different systems: FDD and TDD.