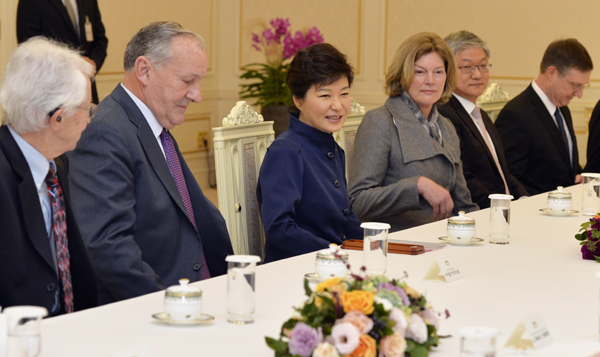 President Park Geun-hye yesterday met with a delegation on a visit to Seoul from Stanford University’s Asia-Pacific research center and asked them to share their expertise regarding peace and security on the Korean Peninsula and in Northeast Asia.

“I gave a speech at Stanford University in May 2009, and [the speech] has recently become an issue,” Park said, welcoming the 10 academics. “I keep a good memory of it.”

The delegates were in Seoul to attend the 11th Korea-U.S. West Coast Strategic Forum, co-hosted by the Korea National Diplomatic Academy and Stanford University.

As president-elect, Park advocated “capitalism with firm principles” in a speech at Stanford, emphasizing the importance of community interests, corporate ethics, as well as the reinforcement of government and the protection of the economically weak.

Her remarks had a ripple effect in the political community, contradicting what conservatives, including President Lee Myung-bak, stood for at the time. Analysts have argued that her speech at Stanford hugely contributed to her victory in the presidential election last year.

“The Korean Peninsula and Northeast Asia need alternative perspectives on peace and security,” she continued. “Academics who have long studied the issues are here at an optimal time. I expect you can offer a valuable opinion.”

Ju Chul-ki, senior secretary to the president for foreign affairs and national security, and Yun Duk-min, chancellor of the Korea National Diplomatic Academy, were also present.