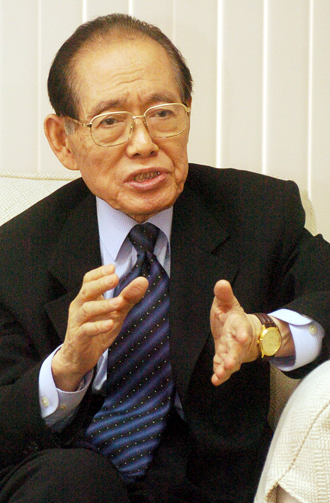 The revelation was made Friday, a day after North Korea’s state media reported the execution of Jang, who was married to the younger sister of Kim Jong-il.

According to the source, Hwang was part of the plot to remove Kim Jong-il before he defected to the South in 1997. He said Jang was also a conspirator, as was his own son Hwang Kyong-mo. The 1996 plot included the assassination of Kim Jong-il.

Hwang, the highest-ranking North Korean official ever to defect to the South, was known as the mentor of Kim Jong-il and an architect of North Korea’s Juche ideology. Before his defection through the South Korean Embassy in Beijing in February 1997, Hwang was the secretary of the North’s ruling Workers’ Party. He died in Seoul in 2010 at the age of 87.

“Hwang told Seoul that Jang was one of the collaborators in his plot to remove Kim Jong-il,” said the source. “But the National Intelligence Service kept it a secret for the safety of Jang until now.”

According to the source, Suh Kwan-hee, a party secretary in charge of agriculture, was another of the conspirators in the failed plan in 1996. Suh was executed in 1997 on charges of spying for the United States.

The source said Hwang told the South Korean authorities that he became disillusioned with the North’s family dynasty and decided that removing Kim was the only way to save the North Korean people. Hwang said he was forced to hurriedly defect to the South because his plan failed.

According to the source, Hwang and Jang were in-laws. Hwang’s son, Hwang Kyong-mo, was married to Jang’s niece.

Hwang Kyong-mo was a primary actor in the assassination plan in 1996, the source said. After graduating from Kim Il Sung University, he tried to use his network in the Supreme Guard Command, the equivalent of the U.S. Secret Service, which protects the Kim family.

When Hwang Jang-yop realized the Ministry of State Security was onto the plan, he was forced to seek political asylum in the South while visiting China. According to the source, he did not even have time to inform his son about his defection.

His son was later forcibly divorced from Jang’s niece by North Korean authorities. After more than a year of house arrest, Hwang’s wife and son attempted to escape to China in the summer of 1998 carrying $98,000. They were arrested near Ryongchon, North Pyongyang Province, and reportedly executed the following year.

Another high-profile defector also said Friday that he had cooperated with Jang to bring changes to the North.

During an appearance on YTN TV Friday, Kang Myong-do, the son-in-law of the North’s former Premier Kang Song-san, said he had once attempted to change the North in cooperation with Jang.

“Jang intended to give up the North’s nuclear arms programs,” he said. “It is true that he attempted to bring changes to the North.”

Kang was a security research director at a university under the Ministry of the People’s Armed Forces before his defection in 1994. After a year of imprisonment for having unauthorized contacts with foreigners in 1990, Kang defected to the South. He is currently a professor at Kyungmin University.

“Kim Jong-un learned that Jang’s associates met with Kim Jong-nam, his half-brother, at the end of October,” Kang said. “And that became the trigger of the purge and execution.”

Kim Jong-nam, the eldest son of Kim Jong-il from a different mother, has been living in exile. After the Kim Jong-un leadership was officially launched in April 2012, Kim Jong-nam was spotted in Beijing, Macau and Singapore, South Korean intelligence authorities said.

It was reported among intelligence sources that China has been protecting Kim Jong-nam because he is considered the most feasible alternative to Kim Jong-un.

“I am 100 percent certain that Kim Jong-nam will soon defect,” Kang said.