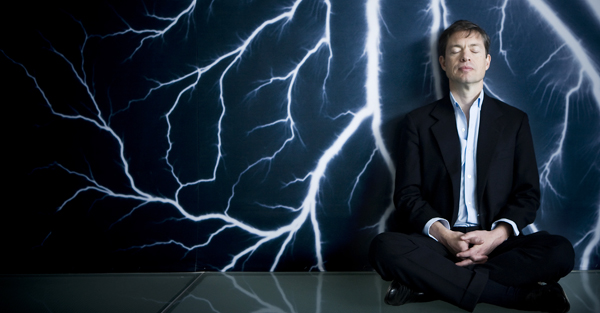 Nicolas Berggruen, a billionaire investor and humanitarian, poses in front of “Lightning Fields,” a photograph by Japanese artist Hiroshi Sugimoto at the Leeum, Samsung Museum of Art, in Yongsan District, central Seoul. By Kwon Hyuk-jae

Nicolas Berggruen is a self-made billionaire who has built his fortune through investments in real estate, stocks, bonds, private equity and venture capital funds.

But he’s not your typical business tycoon, nor does he want to be seen as one.

The 52-year-old founder of Berggruen Holdings, a private equity group, aspires to give back and make his mark on the world. He lives up not only to his talent, but also to his true calling, vigorously pursuing his philanthropic interests.

In 2010, he used $100 million - or 5 percent of his assets - to start the California-based Berggruen Institute on Governance, a think-tank dedicated to bettering government systems using the best ideas and knowledge from the East and West and engaging top entrepreneurs, global thinkers and political leaders to provide input.

He also runs the Council for the Future of Europe, a think tank established by the institute that advocates for a united Europe; and last year, he co-authored a book on good governance with Nathan Gardels titled “Intelligent Governance for the 21st Century: A Middle Way Between West and East,” which was named one of the best books of the year by the Financial Times.

To manage these projects, Berggruen travels the globe via his private jet, learning about each country’s economic and political system and visiting world leaders. He’s discussed the future of Chinese politics with President Xi Jinping and brainstormed solutions for a bankrupt California with Google Executive Chairman Eric Schmidt. If Berggruen hears of a thinker or a politician he doesn’t know, he’ll ask, “Can you email me this person?”

But that’s all in a day’s work.

“Time and energy are limited assets,” Berggruen said. “I want to use it more effectively, in a way that can help everyone.”

The media has often referred to Berggruen as the “homeless billionaire” because he doesn’t own a home and lives out of hotels. He doesn’t need much, nor is he ostentatious, but the Paris-born investor does know how to appreciate comfort: He usually stays in five-star hotels when he travels to major cities.

The JoongAng Ilbo previously interviewed him by phone on Jan. 25, 2011, the first time the investor had spoken with a Korean media outlet. At the time he promised to “go to Seoul someday,” insisting he wanted to “learn about Korea.”

Earlier this month he finally got that chance. Berggruen was recently spotted in Seoul on a weeklong visit; naturally, his schedule between Nov. 30 and Dec. 7 was jam-packed and included talks with some 20 notable figures - from Seoul Mayor Park Won-soon to various politicians and economic leaders.

He also visited a range of locales, from Gwangjang Market to the Leeum, Samsung Museum of Art.

Berggruen appeared to be everywhere - on the train, at the market, at Seoul City Hall. And of course, not one for fanfare, he took the subway, which he said he considers the “mirror of the society.”

On Dec. 1, he insisted on riding the Seoul Metro from City Hall in central Seoul, as a JoongAng Ilbo reporter accompanied him on his trip there.

For all his success, Berggruen - who was named one of Forbes’ “Most Eligible Bachelors” - is surprisingly humble. He avoids pungent foods with garlic and onions and does not drink (a hard feat in Korea). Rather than eating a multi-course meal at a five-star hotel, he prefers a little bakery tucked away in Itaewon-dong.

But he’s also a hard worker.

On Dec. 4, he visited the JTBC studio and met with “News 9” anchor Sohn Suk-hee, one of the Korea’s most respected journalists and president of the broadcaster’s news department. While there, the investor showed a deep interest in Korea’s media environment.

“It’s a great honor to meet with Korea’s greatest anchor,” Berggruen said as he watched a recording of the nine o’clock evening news.

Later in the week, he also sat down with Park Won-soon, Seoul’s mayor. The Korean official talked at length about Seung Hyo-sang, one of the nation’s most relevant architects, and various issues of concern.

Throughout his visit, Berggruen’s iPhone rang nonstop, but he never seemed to tire. He speaks English as well as German and French when conducting his business and keeps pace with his daily responsibilities.

A humanitarian and art lover

The minimalist financier insists that he doesn’t want to appear “boring” like a typical conglomerate head. Posing in front of the Leeum, Samsung Museum of Art on Dec. 5, he told a Joongang Ilbo photographer, who donned casual jeans and a hat, that he wanted to pull off that sort of “cool look” in his photographs.

Afterward, he participated in a guided tour of the museum led by Hong Ra-young, the deputy director.

His affinity for art is practically inherited. His German-born Jewish father Heinz Berggruen, who died in 2007 at the age of 93, was a prominent art collector who founded the Berggruen Museum in Berlin.

Before entering into dealing art, the elder Berggruen was a journalist for the Frankfurter Zeitung and an art critic for the San Francisco Chronicle; he was friends with Pablo Picasso, Joan Miro, Max Ernst and other leading artists of the time.

But Berggruen is quick to emphasize that he is a self-made business magnate, having achieved his goals without assistance from his father. He said he succeeded in building his fortune by investing some $2,000 he borrowed from a friend.

On the last day of his visit to Seoul, Berggruen boarded his private jet and, on a whim, headed to Jeju Island, which is about a three-hour journey.

He’s good at that - changing course at a moment’s notice; and he’s not afraid to venture into unfamiliar territory, either. While he usually travels between the United States and Europe, four weeks ago Berggruen decided to stop by Pyongyang prior to his stay here.

He rode the subway there as well.

South Korean subways are “much more utilitarian,” he acknowledged, though the ones in North Korea are “not just functional .?.?. but monuments to inspire the people.”

In Seoul and Pyongyang, he said, “you can see the ambition of the people on both sides.”

When asked if he planned to extend his philanthropy to North Korea, Berggruen replied shortly, “No.”

When asked why, he responded that his work entailed “supporting the government work more efficiently - in other words, working hand-in-hand with government officials.”

Reflecting back on his recent visit, Berggruen said North Korea could be “characterized as inhumane .?.?. a totally controlled and closed society,” though he thought it best not to underestimate Pyongyang. “On the other hand,” he added, “what I found so extraordinary - unique in many ways - is that [the country] survived,” even 60 years after the war.

Having “been to almost every major and minor country” - more than 100 countries in total - he admitted, “It’s the only place in the world that is totally closed, like an island, and like that for 60 years. It’s perverse, but it’s also an achievement.”

Berggruen said that the eyes of the people on the streets were not like those that you would find “in a failed state .?.?. The “population [in Pyongyang] is not free,” he said, “but certainly you get the sense that people have a purpose on the streets” and that there is “a very active population” both in Seoul and Pyongyang.

He added, “Even though the [North Korean] system is a not a happy system, it’s a functioning system that at least in some major cities seems to work.”