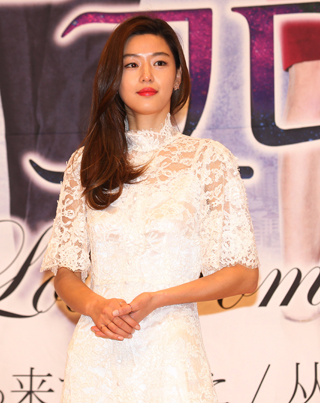 Actress Jun Ji-hyun, who has been a leading film star from “My Sassy Girl” in 2001 to this year’s “The Berlin File,” has returned to television for the first time in 14 years with the SBS drama “You Who Came From the Stars.”

Mirroring reality, Jun plays a famous Hallyu celebrity named Cheon Song-yi, but this character is an obnoxious attention freak, someone who became a top star in her teens and never learned how to live a normal life.

“It is charming that Cheon thinks that she knows everything while often getting things wrong,” said Jun last week at the press conference to promote the drama.

Q. How do you feel about being back on the small screen for the first time in 14 years?

A. When I do movies, I feel more comfortable because it reaches the public only after it is completed. However, when I do dramas, the audience, my friends and family all do real-time monitoring of how I am. I don’t think I will be comfortable until the end of the run.

How do you feel about working with actor Kim Su-hyun again, after starring in “The Thieves” together?

Kim was a newcomer when filming the movie, but he didn’t seem to get nervous. Now he has become a top star after the movie and the drama “The Moon Embracing the Sun,” and I think he has become much stronger. We make each other shine when acting together.

Have changes in your personal life, like getting married, been a positive influence on your work?

For sure. I feel like I’m an adult now, since getting married and growing older. I’m getting used to more of those things, and that helps me act with a newfound confidence, like in “The Thieves” and “The Berlin File.” I think it really is the time to focus on work.

It is quite hard to tell. The character is certainly entertaining, but if I were to say that she is similar to myself, it could be misunderstood. Of course the personality Cheon has is a magnified version of my cheerfulness. But I’m not bipolar and I don’t try to make everything extremely dramatic all the time.

You had a mysterious image before, but now you have become more familiar to the public. What type of image do you want to have?

I have been acting for a long time and that has led me think about many things. Once, I wondered if I should continue working as an actress. But I feel like I’m going to be an actress, and I think I was destined to do it.

I never intended to have that mysterious image, and it sometimes was a barrier to expanding my career. I have always wanted to communicate with the public without any hindrance.