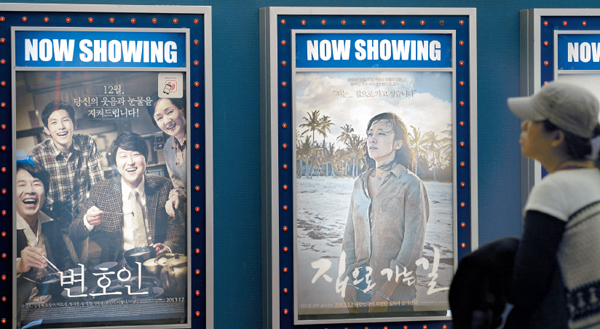 Based on true stories, “The Attorney,” left, and “The Way Back Home,” center, are currently screening nationwide. [JoongAng Ilbo]

At the start of this winter’s big hit movie “The Attorney,” there is a caption that reads: “This film is based on a true story, but please be informed that it is a work of fiction.”

“The Attorney” is loosely based on the infamous “Burim case,” which took place in Busan in 1981, when the military government under Chun Doo-hwan rounded up more than 20 university students, teachers and workers who were members of a book club and falsely accused them of being Communists. The accused were detained and tortured in an effort to shore up support for the Chun regime, which had seized power just the year before.

The film version centers on a lawyer named Song Woo-seok, played by actor Song Kang-ho. As a tax lawyer, Song rakes in the money, but he is somewhat an outcast in legal circles because he passed the bar exam without ever earning a bachelor’s degree. Song’s life is turned upside down when he agrees to defend those who were arrested in the Burim case.

In reality, the attorney the story describes was the late President Roh Moo-hyun.

So far, “The Attorney” has been a major hit, pulling in more than eight million admissions and earning 58 billion won, or $54.3 million, since its release on Dec. 18 until Monday. The film is still going strong and is almost certain to top 10-million admissions.

But due to the controversial politics that still surround Roh, the movie also generated a lot of heat. Some call the film too political, and right-wing groups have reportedly purchased hundreds of tickets to the movie in bulk, only to cancel their purchases just before the movie started in order to prevent people from seeing it.

(The production company of “The Attorney,” Next Entertainment World, denies that the buying-and-selling spree has been a problem).

“The Attorney” is not the only movie based on a true story to be doing well this winter. “The Way Back Home,” which is based on the story of a housewife who was arrested in France for being a drug mule, was released on Dec. 11 and has made nearly 13 billion won.

“The Way Back Home” criticizes the Ministry of Foreign Affairs’ handling of the incident, calling it irresponsible when it comes to protecting Koreans abroad. The movie’s promotions even included posters that read, “The true story that this country ignored will be unveiled!”

Foreign Ministry officials have insisted that the story in the movie is not the whole truth. However, audiences seem to be following the filmmaker’s message and blaming the ministry for the incident.

Like “The Attorney,” “The Way Back Home” declares itself to be a work of fiction, but the movie is being treated by audiences as reality.

Another notable film that fictionalized a real-life incident was Bong Joon-ho’s 2003 classic “Memories of Murder,” which had 5.3 million admissions.

“Stories that are based on real-life events make people think they, too, could experience the same or similar situation,” said Ha Ji-hyun, a professor in the department of psychiatry at Konkuk University.

Top to bottom: “Another Family” will hit cinemas on Feb. 9; “The Attorney,” starring Song Kang-ho, right, topped eight million admissions as of Monday; “Minority Opinion” is scheduled to be released soon; and “The Way Back Home,” starring actress Jeon Do-yeon, deals with a woman convicted of drug smuggling in France in 2004. Provided by the distributors

There are many ways a film can cover a real-life event. “Marathon” and “Take Off” were touching dramas, while “Memories of Murder” was a profoundly funny thriller.

However, films like “The Attorney” and “The Way Back Home” have made headlines in very different ways compared with those thrillers and dramas. Those two films are not about a dramatic event but about society and how one person experienced it.

Kang Seong-ryul, a professor at Kwangwoon University, refers to these two films as “films that draw out sympathy by depicting a situation where there’s an absence of governmental or administrative authority.”

Jeong Deok-hyun, a culture critic, agreed with Kang, adding that “movies that question a country or society create much catharses for audiences.”

“Audiences believe these films because they inform them of the things that the country’s journalists have failed to do,” Kim Young-jin, a film critic, said. “They said that watching ‘Silenced’ or ‘Unbowed’ made them realize that news reports don’t always tell you everything.”

Although these films don’t provide answers, Kim said audiences enjoy getting an ending.

“In our tough reality, we always seem to get defeated, but the endings of movies are not always like that,” said Kim. “They offer the pleasure of punishing the wicked. Even in a movie like ‘The Attorney,’ which ends in defeat, the audience feels a catharsis.”

The desire to learn the hidden truth behind real-life events and experience a catharsis has had big effects. Some moviegoers have begun to consider watching such films as the equivalent to participating in social movements and posting movie reviews more than just stating their likes and dislikes.

“After the release of the movie ‘Silenced,’ the school had to be closed and the police reopened their investigation,” said Jeong, referring to the movie about a school for the deaf where many students were sexually assaulted by the faculty in the early 2000s.

“A bill in the National Assembly was revised and renamed after the Korean title of the movie, ‘Dogani.’ People saw how one movie can change reality and began to congregate on social media sites with the will to change the reality,” said Jeong.

However, Jeong warned that audiences too often forget about the difference between fact and fiction, and “bring the yardstick of good and evil that was used in the movie to judge reality.”

“A similar phenomenon occurred when the film ‘Unbowed’ was released in 2011,” said Jeong.

“Unbowed” was based on the story of a man who lost a lawsuit against being unfairly dismissed from his job, and in frustration fired a crossbow at the presiding judge.

“The ‘other side’ was just condemned, but the reality was not that simple,” said Jeong.

Jeong said “The Attorney” is creating the same sort of oversimplified reaction.

“The Burim case itself should not be the center of controversy,” said Jeong. “The focus should be on the process of how a person transforms from a materialistic lawyer to a human rights attorney.”

The production company of “The Attorney,” said that they expected “some noise” from the release.

“There was great pressure in dealing with that story,” said Choi Jae-won, CEO of Wethes Film, adding that if he wanted to use the film for political purposes, he would have made it before 2012’s presidential election.

“A movie is just a movie,” he said. “There are a few bits and pieces that we’ve borrowed from the autobiography by late President Roh. But most of the main characters are fictional and what happened in the court room is also totally different. What we’ve created is a fiction, but many people empathized with it in the process of interpretation. How they interpret movies is their own prerogative, anyway.”

Audiences can expect more films based on true stories to hit theaters soon. “Another Family,” about Hwang Yu-mi, 22, who died of leukemia in 2007 after working at a Samsung semiconductor plant, will be released on Feb. 6. “Minority Opinion,” about the 2009 fire that killed five protesters fighting evictions in Yongsan, central Seoul, is also set to hit theaters soon.