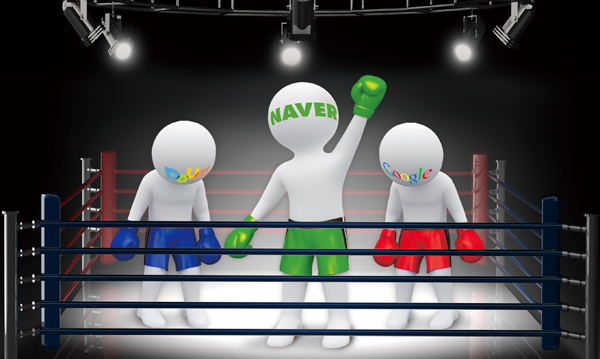 The Korean hit drama series “Respond, 1994” which went off the air two weeks ago after attracting a huge following on cable TV, traces the history of Korea’s Internet portals, as well as the IT trend, through the lives of college students who meet at a boarding house in 1994.

The main characters communicate with a friend in the United States through electronic mail on Daum, Korea’s first portal site. What became known as email quickly spread to other portals such as Hitel, Netian, Freechal and Iloveschool.

When looking at the common features of those early websites - email, cafes and clubs - it’s clear Korea’s Internet culture was based on communication rather than search engines.

Most Koreans today use Naver, which has 70 percent of the portal market, or Daum, which has 20 percent. Portal market share is based on the number of searches performed.

Although Google and Yahoo are Internet search engines and portal sites that are globally competitive, they have failed to catch on in Korea. Google ranks a distant third, and Yahoo Korea closed up shop in December 2012.

When it began in 1997, Yahoo Korea established itself as a leading domestic portal site, at one time ranking first in visitor numbers. However, its market share declined drastically after 2000, until it was knocked out of the top 10 in September 2012 with a share of less than 1 percent. Korea is one of five countries, along with China, Japan, Russia and the Czech Republic, where Google has failed to dominate the Internet search market, according to a survey released by Democratic Party lawmaker Yoo Seung-hee. Google entered the domestic market in 2007.

Google operates in 50 countries and has 82 percent of the world’s portal market. Yet it has only managed to gain a share of 3 percent in Korea, according to Nielsen KoreanClick, an Internet research and consulting firm.

As of November, Google had 11.4 percent of the domestic mobile portal market compared to Naver’s 70 percent and Daum’s 13.4 percent. 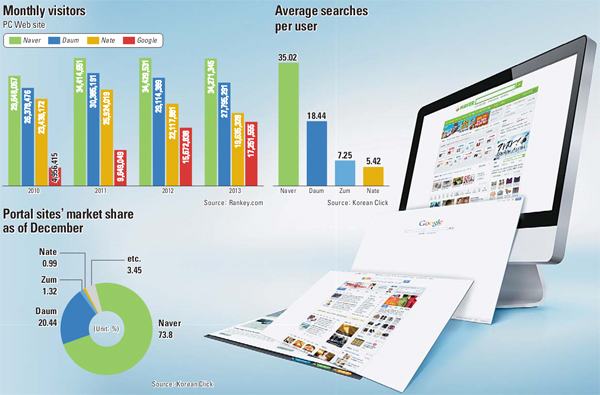 “The establishment of Google’s local branch was seen as merely part of its marketing strategy, and it did not seem to plan on developing into a comprehensive portal site like Naver and Daum,” says Heo Do-haeng, an analyst at Daewoo Securities.

While Google’s profit model is based on offering a search engine and keyword advertising, in Korea there are more page views through community sites, blogs, email, chat, shopping and games than through search engines.

“Google may have extensive global content, but users need to find the information by themselves one step at a time, whereas Korean Internet companies spoon-feed information that users might be interested in, which leads to higher satisfaction,” says an ICT industry insider.

Naver, for example, provides search results using a Q&A service, or in Korean jisik in, where people can interact to share information directly by posting questions and answers.

“The jisik in service considered the characteristics of Korean Internet users who wish to interact directly rather than finding out information only through searches,” says an industry insider.

It also provides search results of blogs and Internet cafes, where people share their experiences and evaluate certain products and services. As such, portal sites like Naver, Daum and Nate provide user-friendly services displaying various Korean data, photos and videos in addition to the search box.

Although Twitter and Facebook are just as popular as blogs in Korea, content from those social networking services are usually about personal affairs and socializing rather than serving as search information for Internet users. However, until recently, Google presented search information through a web crawler that systematically browsed the Internet and lumped together results from blogs, large communities and other websites.

That process is unfamiliar to Koreans, who are used to a universal search that blends traditional results with specialized search entries for videos or images, offering users access to a different types of content.

“Google and Naver are different in that Naver is a portal site that provides many kinds of UCC-based information and services to users, while Google is a search engine that just offers all the information gathered from around the world. We update this information constantly, and focus on that main function as it is operated the same everywhere in the world,” says a Google spokesman.

“Portals are those that present random and miscellaneous information all over their first page, while search sites are those that provide search results when users enter keywords,” says a Google expert who declined to be identified. “Thus, we do not call Google a portal but a search engine, and Naver and Daum are called portals, but as they also have their own search engines they are often regarded as portal search companies.”

“Google Korea is trying out various algorythm and technology that could satisfy the needs of local consumers. The Hot Topic section, providing the top 10 news items of the day, similar to the real-time search keywords provided by Naver, is a case in point,” says a Google spokesman.

A National Assembly audit released in December shows the number of Google visitors increased to 19.73 million last year, compared to 31.25 million for Naver and 27.11 million for Daum.

When adding the number of YouTube visitors (10.47 million), Google’s total rises to 30.2 million.

When Rankey analyzed the number of visitors in the portal market for the past three years, it found that Naver stayed almost the same, while visitors to Nate and Daum declined.

Daum’s visitors have also been falling since peaking in 2011. Last year’s monthly average number totaled 27.79 million, down 1.3 million from the previous year and 2.8 million from 2011.

The situation is worse for the portal site Nate. An average of 19.63 million people visited the site monthly last year, falling below 20 million for the first time. Its monthly average number of visitors also fell to 22.12 million in 2012 after peaking at 25.92 million in 2011.

The Knowledge Graph is a knowledge base used by Google to enhance its search engine results. It was added to Google’s search engine in the United States in May 2012, and it provides structured and detailed information about the search topic, in addition to a list of links to other sites.

Moreover, the spread of Android devices and the Chrome browser has made Korean users more familiar with Google’s format. In Chrome, which accounts for 15 percent of the domestic web browser market, there is an omnibox function for Google in the address bar.

Google also added voice and image search functions and has made an effort to allow handwritten search, image search and interactive search for users to utilize various different input means from the stage of the query.

“In Korea, Google introduced voice search in June 2010, and since then the quality and performance of the voice search has much improved,” says a spokesman for Google Korea.

“Recently, it also started providing a service that automatically adds subtitles and synchronizes sound and text through voice recognition technology. Image search is also available at Google. When users choose image in the search box and put the image, it will show search results of similar images.”

Along with answering user-initiated queries, Google Now also delivers information that might interest the user.

“The smart assistance, which delivers information before being asked by understanding the context of different users, could become the future of search, and that is what the intelligent personal assistant Google Now is aiming for,” says the Google Korea spokesman.

Meanwhile, besides the steady growth of Google and the strategic alliance between SK Communications and Daum Communications involving Nate, other changes in the industry are expected.

Nate’s search partnership decision is seen as a last-ditch effort to survive. SK Communications posted losses totaling 9.3 billion won ($8.7 million) for eight consecutive quarters prior to the third quarter of 2013.

In the meantime, Nate has been the No. 3 portal, but Google and Zum are threatening its position. Zum actually overtook Nate in monthly search volume last month, with 46.21 million results according to KoreanClick, compared to 40.98 million for Nate.

It remains to be seen whether the alliance of Daum and Nate can seriously challenge No. 1 Naver or rising Google.