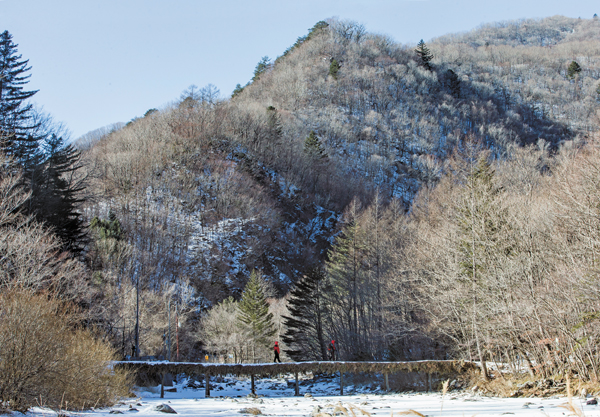 Seonjaegil is a trail that connects Woljeong and Sangwon temples. Not far from the trail’s entrance, there is a bridge that crosses Odae Stream, which provides the best view of the area. By Shin Dong-yeun

In winter, the sky above Mount Odae in Gangwon is clear and the air is fresh. Dozens of fir trees surround a trail that leads to Woljeong Temple, which receives few visitors at this time of year. The trail is known as Seonjaegil or “a road for truth-seekers.”

In the chilly weather, it looks like Odaechun, or Odae Stream, is frozen, and part of the area is covered by snow. The atmosphere is calmer than usual because there isn’t much water flowing. It feels like the environment is telling people to listen to their inner voice, rather than seeking something else. The weather agency said that the temperature in Pyeongchang, where Seonjaegil is located, will be minus 10 degrees Celsius (14 Fahrenheit), but it feels much warmer than I imagined. 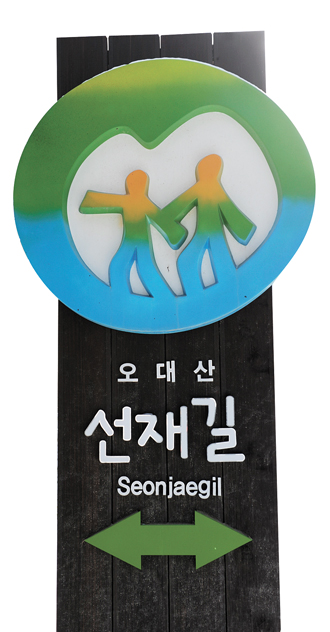 In 643, during the Silla period (57 BC-AD 935), Monk Jajang built Woljeong Temple after he met Bodhisattva Munsu while studying at Mount Odae in China. This is why Mount Odae is one of the most sacred places in Korean Buddhism.

Seonjaegil is a trail that connects Woljeong and Sangwon temples. In October, the Korea National Park Service restored the trail to make the area more tourist friendly, then officially named it Seonjaegil. Seonjae was the name of a boy monk who appeared in the Avatamska Sutra, one of the most influential texts of East Asian Buddhism.

Mount Odae is 1,563 meters (5,130 feet) high, but its trails aren’t that steep and are easy to climb. After passing Iljumun, the main entrance of Woljeong Temple, a trail lined with fir trees that is considered to be one of the most beautiful trails in the country, appeared. About 1,700 fir trees, most of them about 40 meters high, grow thick. It felt like the air that the forest breathes out was refreshing my body. I’m not a Buddhist, but it made me think of the thousands of truth-seekers who might have walked on this trail in the past.

The forest that leads to Woljeong Temple is 1,000 years old. During the Goryeo Dynasty (918-1392), when Monk Naong was preparing a meal for himself, legend has it that a dusting of snow on the branch of a pine tree fell into his rice bowl. At that moment, a bearded mountain god suddenly appeared and told him to cut down pine trees and to make a deep bow to nine fir trees.

Because this is an old tale, I don’t know whether it’s true, but pine trees that are commonly found throughout Korea are rarely seen on Mount Odae. This feature can also be seen on a painting by Kim Hong-do (1745-1806).

As I walked the 1-kilometer (0.6-mile) trail, Woljeong Temple came into sight. During the 1950-53 Korean War, the interior of the temple was burned down, except for the octagonal nine-story stone pagoda, National Treasure No. 48.

The temple was restored by Monk Tanheo (1913-83) in 1964. Tanheo was one of the most famous monks in modern Korean Buddhism, and he walked along Seonjaegil thousands of times to find wisdom.

The monk was one of the few who had already mastered many Buddhist scriptures by the time he was in his late teens. After speaking about the true meaning of wisdom with 57-year-old Monk Hanam of Sangwon Temple via mail for three years, Tanheo decided to stay with Hanam to study Buddhism. He then spent most of his life translating Buddhist scriptures and was later revered as a pioneer of modern Korean Buddhism. Many of his students are now working as famous Buddhism lecturers nationwide. 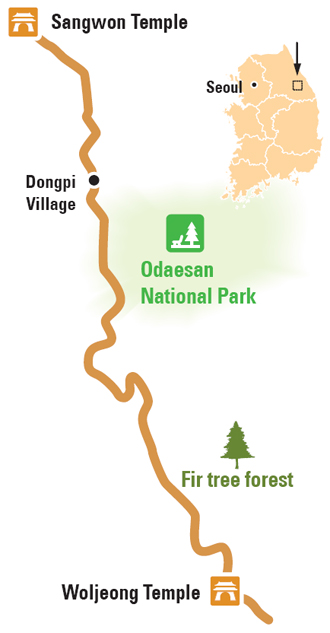 The restoration of Seonjaegil began in 2004, after the Korean National Park Service found traces of a road that monks might have walked on to go to Woljeong Temple about 1,000 years ago.

“I can’t remember the exact time, but so many people started coming to the trail as they wanted to ease their mental stress,” said Park Jae-hyun, a Korean National Park Service official. “So we restored the old trail so people can experience part of the old monks’ way to find wisdom.”

During the restoration, shelters and information boards were added to the trail, which is easily walkable.

Following a direction board, stepping-stones that cross Odae Stream came into sight. Seonjaegil is between Odae Stream and the No. 446 prefectural road. It is hard to see the stepping-stones from the roadside because they are covered by a dense forest of fir trees.

When I arrived at Dongpi Village, I saw a small cabin. After taking a break there, I walked another 3-kilometer incline trail course that led me to Sangwon Temple. Local residents there explained that there were about 360 households around the temple until the 1960s, but after armed spies from North Korea slipped into the area to hide there in 1968, all the residents left.

As I approached the temple, I encountered another dense forest of fir trees. The road stretches from the temple to Biro and Duro peaks, but the trail officially designated as Seonjaegil ends at the forest. At the entrance of the temple, there is a rack that King Sejo of the Joseon Dynasty (1392-1910) used to dry his clothes on. And there is a Buddhism tale related to the temple.

King Sejo became king by ousting King Danjong, who was his nephew. The story said that Sejo got a skin disease on his back because he felt guilty about killing his nephew, which he did after he became the king. He took a bath at Odae Stream after praying for a cure for his disease at the temple. The king asked a boy monk who was passing by the stream to help him wash his back. Surprisingly, the disease was cured. After finishing his bath, the king asked the monk not to tell anyone what he had done. The young monk replied, “And the king should not tell others that you just met Bodhisattva Munsu” and disappeared. Because the king was deeply touched, he established a wooden face of the Bodhisattva at the temple.

Later, when Korean soldiers set out to burn down Woljeong Temple as part of their search for Communists, Monk Seonsa sat in front of the statue of Buddha and yelled at them.

The soldiers’ general was overwhelmed by the monk’s attitude, so he ordered his troops to remove one of the doors from the entrance to the temple and burn it as a symbolic gesture, rather than burning down the entire temple.

At the entrance of the temple, there is a signboard that reads “Wisdom of sky, awakened mind.” When I was looking casually at the signboard, a titmouse approached me, then warbled for a few seconds before it left. It felt like it was asking me whether I know what true wisdom is. 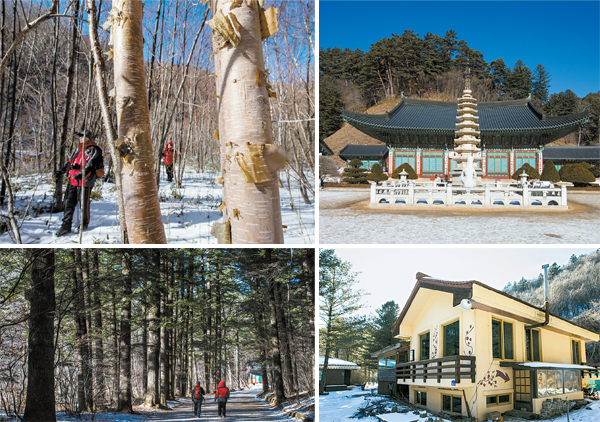 Clockwise from top left: Korean birch trees on Seonjaegil; the octagonal nine-story stone pagoda at Woljeong Temple; a cabin on Mount Odae near Dongpi Village and a fir tree trail. By Shin Dong-yeun

Seongjaegil, which connects Woljeong and Sangwon temples, is 9.4 kilometers long and it takes about 3 hours, 30 minutes to walk the entire incline course. Before your trip, check with the Korea National Park Service (www.knps.or.kr), especially in the winter, because the road could be covered in snow. A ticket for an adult is 3,000 won ($2.82). Woljeong Temple runs a three-day temple stay program for 150,000 won.