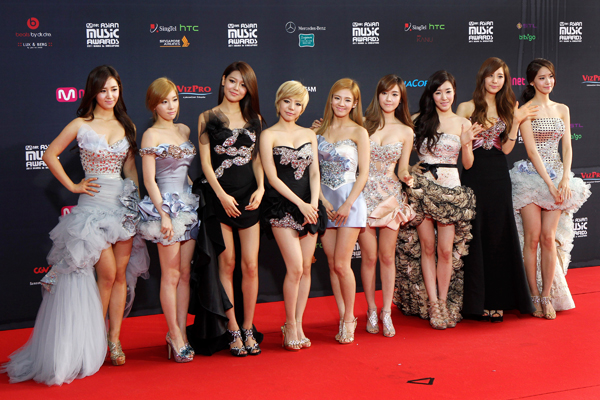 Members of Girls’ Generation pose on the red carpet after arriving at the 2011 Mnet Asian Music Awards in Singapore on Nov. 29, 2011. [AP/NEWSIS]

Let me apologize to my Korean friends in advance. I know how proud of Psy Koreans are, and how fascinated they are with the success of his “Gangnam Style.” I grant that his one billion hits on YouTube is impressive.

Nevertheless, the critical issue for Korea is direction, not speed. The speed with which Psy became a world icon is breathtaking. But if the direction is wrong, it is simply wrong. If the Korean Wave lacks ethical and aesthetic content, it simply will not last; if Korea puts all its efforts into cultivating a culture of lavish consumption, and of meretricious images that rush by, where will we be when the party is over?

Psy embodies a materialist culture of consumption, a narcissism that draws us to surfaces. Friends tell me that he is engaged in an elaborate parody of materialism, but that is not how he is understood by his followers around the world. They are drawn rather to his indulgence, to his compulsive behavior and to his prepackaged masculinity.

I ask you whether a handicapped girl will find inspiration in the prancing teens of K-pop bands to know that commitment, trust and belief are more powerful than appearances and fleeting thrills? Will youth find in the videos they watch an inspiration to give back to society and create a new global network to advance peace and to save the environment?

I doubt it. Gangnam is in danger of becoming a cultural desert. Not unlike the spreading deserts in China that now fill the air we breathe with dust and sand.

All the greater is the tragedy of this consumer interpretation of the Korean Wave, as its original appeal was based on the compassion, emotions and humaneness of Koreans.

Korea was the only country that has become a global power without the baggage of colonialism and imperialism, without the cultural elitism of other such powers. That is the true essence of the Korean Wave.

If the direction for the Korean Wave is wrong, the tragedy is one we will share with the entire world. If Korea’s youth throw garbage on the ground, waste natural resources and energy without even a thought, and pursue a personalized life of disposable paper cups and late-night drinking in which there is no room for parents and friends, let alone those who have had less advantages in life, we can be sure that youth in Southeast Asia, Central Asia, the Middle East and elsewhere will follow that model. That will lead to a true cataclysm for humanity in this age of limited resources.

And what about that traditional Korea that we have left behind? The Korean mother who saved every single grain of rice, was she so backward and uncultured? In an age of climate change, those traditional virtues of frugality, that concern for soil, water and nature should be at the core of the Korean Wave.

And what about those yangban scholars? Were they foolish and backward when they sat in simple unadorned rooms and read the Confucian classics all day, speaking of personal morality and of responsibility to family and society? Or did they grasp some truth about the need for a spiritual space in our lives and the importance of avoiding the mindless consumption that so damages the environment?

So what can the Korean Wave be? Imagine an African in a small village in Kenya who rises up to build a new drainage system for his people and fights to preserve his culture against the onslaught of international culture. He says, “I am the King Sejong of Kenya.” He finds inspiration in the greatness of the past, a universal past, which comes from Korea.

Imagine a woman combating drug gangs in Mexico City. She tries to bring together the community to pursue common interests and build a system that is inclusive. She says, “I am the Dasan of Mexico,” and she finds a model for action in a Korean intellectual who stood up for commoners and embraced a new vision for his country.

A Mexican can find in that Korean tradition something she can make her own. That is not a Korean Wave you will find in popular songs today. But it could be.