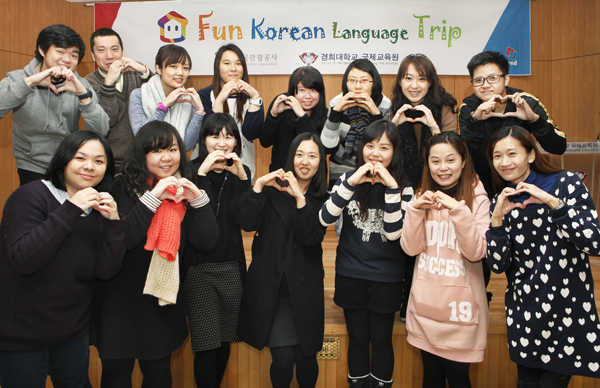 Participants in the Fun Korean Language Trip run by Kyung Hee University’s Institute for International Education celebrate with their teachers at a completion ceremony on Friday on campus. By Park Sang-moon

A group of students packed into a classroom at Kyung Hee University last Friday formed a circle and sang and danced to a popular track from K-pop sensation Crayon Pop.

The students traveled from all around the world to participate in a unique language program that uses Korean pop culture in the classroom. Desks were pushed against the walls, ensuring there was plenty of room to dance. As the music boomed loudly and a projector displayed the popular music video “Bar Bar Bar,” the 14 students belted out the lyrics and copied the group’s dance moves. When the song ended, everyone bursted into laughter and applause, huffing wearily.

The Fun Korean Language Trip (FKLT) is a university program with a difference: It’s all about having fun. The program is not strictly regimented or focused on exams or grades. It aims to provide students a snapshot look into Korean pop culture and lifestyle. The weeklong program uses K-pop and K-dramas as tools to teach participants about the Korean language and culture.

Jodie Li, a 40-year-old banker from Hong Kong, completed the program on Friday. She said she had always loved K-pop and once studied Korean at a university in Hong Kong.

“I knew it would be great if I could have more of a local Korean experience,” she said. “I read about the Fun Korean Language Program on the Internet and thought it was an interesting program.”

Through studying the lyrics of popular K-pop songs or translating the scripts of K-dramas, the students learn some of the language and mannerisms of Korea. It’s a window into modern-day Korea, providing visitors with a unique travel experience.

The program began in mid-2012 after the Korea Tourism Organization (KTO) approached Kyung Hee University’s Institute for International Education about collaborating on an educational tour to teach foreigners about Korean traditions, culture, language and lifestyle.

Kim Jung-sup, dean of the Institute of International Education, said the Korean language programs have become increasingly popular since they first started at the university in 1993.

In 1993, only a handful of students studied Korean, mainly through exchange programs. Today, around 6,000 students from 90 countries take part in Kyung Hee’s Korean language programs each year.

Kim said language programs are helpful not only for foreigners wishing to live and work in Korea, but also for those wishing to learn more about the culture. Participants in the FKLT programs are between 18 and 45 years old and come from a variety of backgrounds. Many are from other Asian countries.

The FKLT is the shortest of the programs. Excluding airfare, the one-week program costs 600,000 won ($554) and is only offered through Kyung Hee University. Language lectures are held on weekday mornings for four hours. In the afternoons, students can participate in a variety of activities including cooking classes or tours of Seoul. Students stay with Korean families in homestays organized by the KTO. The cost of the homestay is included.

“The Korea Tourism Organization recruits students,” said the manager of the Institute of International Education, Hwang Moon-ha. “But they are not really students, they are more like tourists.”

By their final day of class, the students have forged close friendships. At this stage of the program, the teacher speaks exclusively in Korean. Though the students have varying levels of language skills, they can all understand basic Korean instructions by the fifth day.

The program is run 16 times a year, eight in the summer and eight in the winter. Each session is limited to two classes of 15 students.

Hwang said the program suits foreigners who are not able to participate in longer courses.

“The program is very special and very fun,” he said. “Other language programs are academic, but this one isn’t. Our materials and textbooks are K-pop and K-dramas.”

Jodie Li, who could only take a short break from her job, said her homestay allowed her to see how Korean families live their day-to-day lives.

“If I just traveled here as a tourist, it wouldn’t be the same,” she said. “Studying Korean by itself would be too boring, but mixed with K-pop and K-dramas, it’s more exciting.”