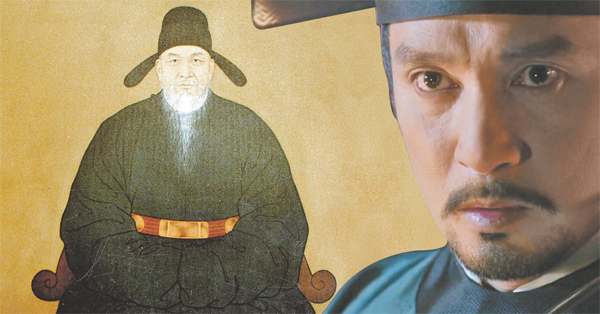 Jeong Do-jeon, left, the 14th-century politician and scholar, is in the spotlight these days because of a new KBS drama that stars Jo Jae-hyeon, right. Critics say people’s thirst for ideal leadership is playing a central role in the popularity of the drama.[JoongAng Ilbo]

Yet that wasn’t always the case. Rewind about 20 years or so, and epic dramas in Korea played out more like history textbooks. But they worked, somehow, and were often the most popular shows of their time slots. KBS in particular was known for its well-made historical dramas.

But can epic dramas survive nowadays just staying true to history, without embellishing facts? Many might shake their heads at the idea and disagree. But KBS’s “Jeong Do-jeon,” a historical drama that began on Jan. 4, is proving to be a resounding success.

The drama is about Jeong Do-jeon (1342-1398), a noted government official and scholar whose life spanned the end of the Goryeo Dynasty (918-1392) and the start of the Joseon Dyansty (1392-1910). For many Koreans, he is best known as a visionary who was the architect of Joseon society.

After two years of planning and 13.5 billion won ($12.5 million), the drama is enjoying solid ratings and is being hailed as the most “authentic and realistic” historical drama in quite a while.

Over its first six episodes, which aired from Jan. 4 to Jan. 19, the show’s average ratings stood at 12 percent, according to Nielsen Korea. The figure is quite solid, considering that it’s a weekend evening drama.

The drama’s characters have become the most-searched terms on web portals, and the drama’s official website received about 500 posts in its first two weeks. 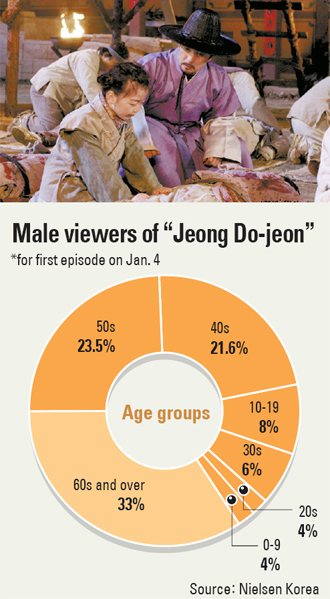 To create “Jeong Do-jeon,” the production team formed an advisory panel that consisted of history experts, all with doctorates or master’s degrees in Korean history, concentrating on the era in which Jeong lived.

The cast members also attended a four-month course taught by famed historian Lee Deok-il on Confucianism and the various government regulations that were created with the start of the Joseon era.

(While Goryeo’s national religion was Buddhism, Joseon was built strictly upon Confucian values.)

Head writer Jeong Hyeon-min in particular worked hard to get the history right. He perused many books on the Goryeo times, as well as biographies of the figures in the drama.

“All of the titles held by the characters are the exact match to the government positions that the actual figures assumed at the time,” he said. “My main goal was to maintain the truth of history as much as possible.”

Casting veteran actors like Jo Jae-hyeon (who plays Jeong Do-jeon), Park Yeong-kyu and Yu Dong-geun - who have been in the industry for decades, acting both in dramas and films - also helped people to take the drama seriously.

“The drama could be better in terms of computer graphics and music,” pop culture critic Kim Ju-ok said, “but just looking at these veteran actors altogether is quite pleasant.”

Im Yeong-ho, a mass media professor at Pusan National University, also said the drama shows “the power of looking squarely at history, amidst all the cute, romantic historical dramas.”

“If you capture the hearts of the people, the people obey you. But if you fail to win their hearts, they will indeed betray you.”

The production team quoted these words by Jeong Do-jeon in their production notes on the drama’s website.

Some observers say the political situation in Korea at the moment - with liberals and conservatives locked in power games, both blamed for neglecting the issues that really matter to people - is quite similar to the setting of “Jeong Do-jeon.”

The drama is set in the years between 1374, the final year of King Gongmin (1330-1374) of Goryeo, to the year in which Jeong died. Those times were marked by political chaos, as well as government officials and scholars who dreamed of a new dynasty and a new era.

In fact, head writer Jeong worked as an aide to several Korean lawmakers before changing jobs. Jeong worked for a decade assisting 10 lawmakers from both the ruling Saenuri Party and the main opposition Democratic Party.

“Jeong has experienced various aspects of the political spectrum in the field,” said Kim Hyeong-il, the drama’s chief producer. “He can approach an event from various aspects, and I believe such an ability is important for historical dramas. That’s why I suggested that he write the drama.”

A hit with middle-aged men

The viewers of “Jeong Do-jeon,” unlike other dramas, are men over the age of 40.

Critics say that, until now, Jeong Do-jeon has been portrayed as a traitor to the Goryeo Dynasty. But after looking at the historical records, the drama team decided Jeong was actually someone who loved the people and believed the people were the most important part of running a country.

“Jeong was a government official and intellectual who was rational and practical,” said Kang Byeong-taek, one of the drama’s producers. “The two are important values in Korea today.”

Kim, the chief producer, also said, “It appears that many middle-aged men share the feelings of achievement and failure that Jeong and other characters felt as they ran the country.”

Culture observers say that the thirst by men for good political dramas and new political leadership has already been attested to with the popularity of recent films like “The Attorney” (2013) and “Masquerade” (2012), and the TV drama “Deep-Rooted Tree” (2011).

“The public always anticipates and is disappointed by politics,” one drama production chief said. “When an important politician from the past is recreated in pop culture, it can be quite influential.”

Another factor that has contributed to the success of “Jeong Do-jeon” is the recent publication of books on Jeong’s life.

The history books led MBC to also plan a drama about the pivotal scholar. However, the success of KBS’s program has caused MBC to postpone its plans indefinitely.

In addition, KBS worked to create synergy with its history talk show, “The Day, History Journal,” which runs at 10:30 p.m. on Sundays, right after “Jeong Do-jeon” finishes. Since the drama’s first episode, the history talk show has dealt with Jeong, the fall of Goryeo and the rise of Joseon over three consecutive episodes. The history talk show invites not just historians as panel members, but also poets, film directors and pop culture critics.

Although that collaboration lasted only for three episodes, many in the media industry say it was a new approach that will likely continue in the entertainment business.