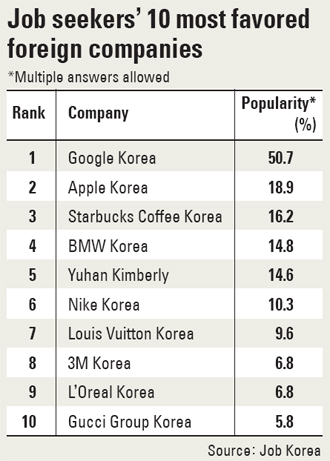 According to a survey of 1,876 job seekers in their 20s and 30s by the online recruitment portal Job Korea, Google Korea kept its top spot for a third consecutive year, while Apple and Starbucks each jumped two spots from last year.

Other big jumps went to Volvo Group Korea and the world’s second-largest software developer Oracle Korea, both of which made their first appearances in the top 30. Audi Volkswagen Korea, Adidas Korea and Siemens Korea also saw their popularity rise among job seekers.

Google Korea is famous for providing a variety of benefits to ensure employees’ wellness and satisfaction at work. It gives autonomy to its employees in changing around working hours and invests in fitness programs and building rest areas.

But Google says that such benefits are not the primary reason to work at the company.

“Employee welfare programs are just a small part of why our employees consider Google a favorite workplace,” said Park Seon-kyung, head PR manager at Google Korea. “Many of our employees cite the corporate philosophy and flexible workplace culture as important reasons. Compared to Korean companies, Google Korea has a more horizontal culture in which, for example, employees exchange opinions about their projects with senior staff at lunch.”

Park said such beliefs are a large part of why Google Korea has such a low turnover.

Byun Ji-sung, manager at Job Korea, explained that foreign companies are often equipped with better facilities for employees compared to local companies. Many of them also have policies that are more friendly to female employees, especially for maternity leave and child care.

Unlike Korean hierarchical corporate culture, foreign companies have performance-oriented compensation, with promotions not being based on working years.

However, Byun warned job seekers hoping to enter foreign companies only because of welfare policies.

“It is true that foreign companies are more flexible with employee welfare benefits and offer more horizontal corporate culture,” said Byun. “However, they are tough in evaluating employees’ performance.”

According to the Job Korea survey, 66 percent of respondents were most concerned about their English skills when applying to foreign companies. However, such worries are something of a stereotype.

When the survey asked 16 foreign recruiters from the top 30 most-favored companies, 13 of them answered that they only expected an English ability good enough for business conversation. Three of them even said they only required beginner-level conversation skills if employees had great job-related abilities.

Byun advised job seekers to focus on building job-related experience, such as internships and work experience, before applying to foreign companies.