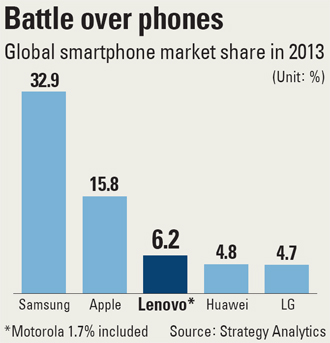 The rapid growth of Lenovo is posing a direct threat to Korean mobile-device manufacturers, local analysts say - and even to Samsung Electronics, the world’s largest smartphone vendor.

The Chinese company, which gobbled up Motorola on Jan. 29, is openly professing that its goal is to move past Apple and Samsung.

With the buying of Motorola from Google, Lenovo has leapfrogged LG Electronics and Huawei to become the world’s third-largest smartphone vendor. According to Strategy Analytics, Lenovo and Motorola’s combined market share in the global smartphone market was 6.2 percent as of the end of last year, compared to Huawei’s 4.8 percent and LG Electronics’ 4.7 percent.

The stock price of LG Electronics plummeted 3.48 percent yesterday on the first trading day since the main bourse Kospi reopened after the Lunar New Year holidays that started last Thursday.

Some analysts say Lenovo has emerged as one of the few companies that can threaten Samsung Electronics because of the company’s strength not only in the smartphone and tablet markets but in many other IT sectors, including PCs, smart TVs and even the server business.

The local IT industry forecasts that Lenovo will operate on two fronts, targeting emerging markets with its own brand while penetrating the U.S. market, South America and Europe with the Motorola brand.

“The buying of Motorola by Lenovo, two giants from the world’s largest smartphone markets in the U.S. and China, will have an unpredictably large impact,” said an executive of a Korean telecommunications company.

In the Chinese smartphone market, Lenovo became the No. 2 smartphone vendor in the third quarter of 2013 by selling 10.8 million smartphones and controlling a 13.6 percent market share, closing the gap on Samsung’s 21.6 percent.

“Demand for Motorola is mainly in the U.S. and South America, while Lenovo is mostly known in China and some parts of Asia,” said Lee Seung-woo, an IT industry analyst at IBK Securities.

“LG Electronics has been focusing on the U.S. and the South American market, and thus the Lenovo-Motorola coalition will threaten LG’s position directly.”

Some analysts agree that Lenovo’s growth will put pressure on Samsung’s smartphone and electronics businesses, but they withheld a concrete conclusion, especially after a cross-licensing deal between Samsung and Google announced on Jan. 27. The deal is expected to reinforce their ties in hardware and software, which could push Motorola into a corner.

“Google is a highly significant technology partner of Samsung and in the long run, the cross-licensing deal could boost the alliance to compete against its main rival Apple as well as the emerging Lenovo,” said Lee.

Another analyst predicted that the synergy of Lenovo’s acquisition of Motorola could be rather limited as the acquisition includes handset manufacturing, which does not include Motorola’s patents. Google held onto the patents.

“When considering that Lenovo will have to pay patent royalties, which are still owned by Google, it has a disadvantage in competition against Samsung,” said an industry insider.

The acquisition is also expected to heighten growing competition in the low-end smartphone market, which could also dampen investor sentiment in the short term, said Lee Min-hee, an analyst at I’M Investment and Securities.

“It is negative news for LG Electronics in particular as LG is struggling with Chinese companies to be the third-largest smartphone vendor in China,” Lee said.

Lenovo was a start-up that began in a humble brick building, just as Apple and Microsoft were established in their owners’ home garages.

Liu Chuanzhi, who was a researcher at a computer research institute of the Chinese Academy of Science, founded the manufacturing company with 200,000 yuan ($33,000) and 10 co-workers.

The company grew rapidly through mergers and acquisitions, especially since 2005 when it acquired IBM’s PC business.

Lenovo grew into the world’s No. 1 PC maker, accounting for 16.9 percent of the global PC market and beating Hewlett-Packard’s 16.2 percent.

In September, 2012, it acquired Brazilian electronics company CCE and in the same month purchased the U.S. software developer Stoneware to secure cloud technology.

“Lenovo was reborn as a global PC manufacturer through aggressive M&As worth $1.25 billion and scored tremendous synergy by combining IBM’s Think Pad brand with its low-cost structure,” said Professor Moon Song-chun of the College of Business at the Korea Advanced Institute of Science and Technology.