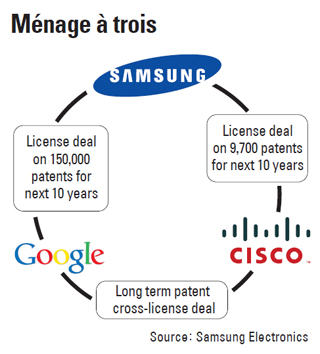 Samsung Electronics agreed on a patent peace accord with Cisco Systems yesterday following a similar recent deal with Google, while Google and Cisco signed a separate patent cross-licensing deal Wednesday.

As a result, the world’s largest electronics manufacturer, Internet software and networking equipment companies have formed a triangular patent alliance.

The odd man out is Apple.

The purpose of the partnership is to support each other by avoiding litigation, which is expected to further isolate Apple in the IT industry.

Samsung and Cisco entered into a cross-licensing agreement on a wide range of products and technologies to avoid patent lawsuits.

“Through the patent cross-licensing deal with Cisco, both companies will be able to concentrate on growth, which will also provide more benefits to customers of Samsung and Cisco,” said Ahn Seung-ho, the head of Samsung’s Intellectual Property Center.

Industry analysts predict the alliance could be expanded to other global IT companies, and the industry could be structuring itself into blocks of allied forces. The agreement includes not only existing patents but new ones gained by Samsung and Cisco in the next 10 years.

“Innovation has been somewhat constrained due to the excessive litigations over patents in recent years,” said Dan Lang, vice president of intellectual property and deputy general counsel at Cisco Systems.

“The new partnership will be able to reverse the daunted atmosphere and accelerate innovation.”

The number of Google’s patents related to telecommunications reached 50,000 after it acquired Motorola’s mobile business for $12.5 billion in 2012. Google has secured 1,920 patents in the United States alone. It recently sold Motorola’s phone business to China’s Lenovo but held onto its patents.

Cisco Systems has accumulated a patent portfolio numbering 10,000 by acquiring 41 companies in the last 10 years.

“Samsung Electronics seems to be banking on the patent alliance as global competition with Apple in its cash cow mobile sector has been tough. The licensing deal with leading IT patent giants will likely give Samsung a comparative advantage over Apple.”

Just one month earlier, Samsung made licensing deals with Ericsson and Google. It purchased 33,000 patents from Ericsson and will share 150,000 Google patents, including those acquired by the company in the next 10 years.