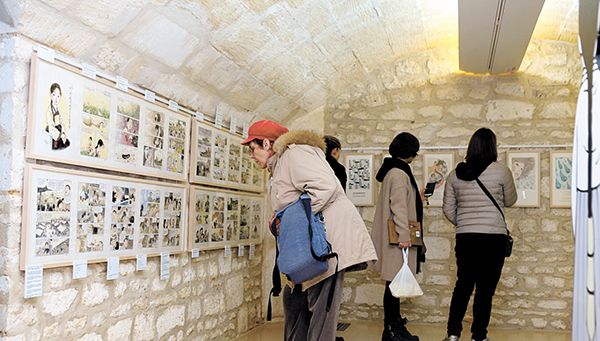 Visitors look at comics depicting the plight of women who were sexually enslaved by the Japanese military during World War II. The works were part of an exhibition at the 41st Angouleme International Comics Festival in France. [NEWS1]

It is a simple black-and-white comic. A small girl crouches on her cot. There is a silhouette of an armed soldier that approaches her. He is there to pay her a visit.

The young girl was one of hundreds of Koreans who were forced into sexual slavery by the Japanese military during World War II.

Titled “Spring of a 14-Year-Old Girl,” the black-and-white comic by Oh Se-young was one of 25 that were on display recently at France’s Angouleme International Comics Festival.

The exhibition “The Flower That Doesn’t Wilt: I’m the Evidence” has now come to Korea, where it is on display at the Korea Manhwa Museum in Bucheon, Gyeonggi.

Manhwa is the Korean word for comics.

In addition to “Spring of a 14-Year-Old Girl,” “Butterfly’s Song” by artists Kim Gwang-sung and Chung Ki-young and “Flower Ring” by Tak Young-ho have been highly praised by critics.

When originally displayed at the Angouleme International Comics Festival, the exhibition received rave reviews from many foreign media outlets.

The French news weekly Le Nouvel Observateur ran a story focusing on the diplomatic war between Korea and Japan.

“The exhibition was organized to promote the comfort women issue overseas,” it wrote.

The French newspaper Liberation also wrote of the exhibit. “It was a touching and productive exhibition that remembers and represents the 50 still-living victims,” wrote the paper.

“The grandmothers’ pain is all ours,” said the popular graphic novelist Lee Hyun-se, who was one of the participants at Angouleme.

“Through the exhibition, we could make a platform in which people around the world could think about the issue. I believe that is the power of comics and cultural contents.”

The exhibition runs until March 16 and is free of charge. The hours are 10 a.m. to 6 p.m. every day, except Mondays.