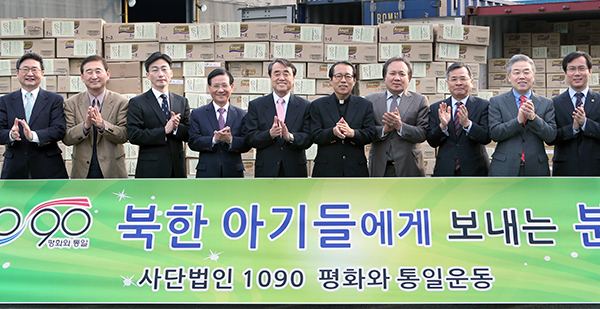 Directors of civic group 1090 Peace and Unification Campaign send off a shipment of 26,000 cans of powdered milk for North Korean infants yesterday at Incheon Port. The amount can feed about 13,000 babies for a month, according to the group. By Park Jong-keun

A ship carrying 26,000 cans of powdered milk totaling 22.1 tons departed for North Korea yesterday from Incheon Port, west of Seoul. The amount can feed about 13,000 babies for a month, according to the civic group 1090 Peace and Unification Campaign, which is in partnership with the JoongAng Ilbo.

The milk, worth about 340 million won ($316,868) wholesale, will arrive in Nampo, a western port city of North Korea, via Dandong, a port in China.

“At a moment of transition in inter-Korean relations with the ongoing reunions of separated families, it is a meaningful event to send the powdered milk for North Korean babies,” Lee Young-sun, chairman of the group and a former president of Hallym University, told the JoongAng Ilbo.

Along with medicine, powdered milk is needed in the North. Despite frosty relations with Pyongyang over the past few years, Seoul has frequently approved shipments of powdered milk or medicine by civic groups in South Korea. The Ministry of Unification, which is in charge of the approvals, green-lighted the civic group’s plan to send the milk on Friday.

President Park Geun-hye emphasized the need for humanitarian assistance to North Korea at a New Year’s press conference on Jan. 6.

“We should continue to expand humanitarian assistance for the North Korean people as they are still suffering in dire living conditions,” she said.

Unification Minister Ryoo Kihl-jae also said in his New Year’s report to the president in January, “We will continuously carry out humanitarian assistance for the needy in North Korea, including children, regardless of the political situation.”

The government recently announced a plan to provide the North with vaccines for foot-and-mouth disease.

“We need fast measures to prevent foot-and-mouth disease from spreading [through the entire country] and exterminate it,” a Unification Ministry official told reporters at a closed-door briefing yesterday. “We proposed low-level talks [to North Korea] to discuss relevant works.”

Park mentioned yesterday that the highly contagious virus is spreading in North Korea.

“Foot-and-mouth disease is continuously breaking out in neighboring countries, including North Korea, China and Mongolia,” she said at a meeting with officials from the Ministry of Agriculture, Food and Rural Affairs yesterday. “I want you to tighten the border quarantine to a higher level and boost vaccinations on livestock nationwide.”

North Korea’s official Korean Central News Agency reported Friday, “On Jan. 8, foot-and-mouth disease broke out at a hog farm in Pyongyang, spreading to 17 units [districts] in Pyongyang city and Junghwa County in North Hwanghae Province. About 3,200 animals were contained by the FMD O-type, leaving 360 of them dead, and 2,900 were slaughtered.”

The KCNA added that the virus was spreading due to a lack of vaccines.