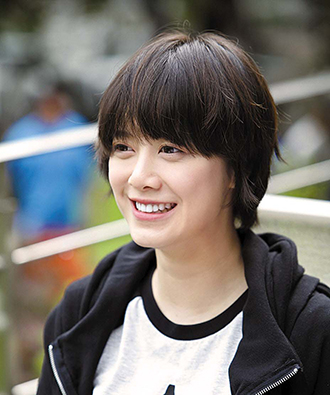 Actress Ku Hye-sun has confirmed that her next role is on the new SBS weekend drama series “Angel Eyes,” according to her agency, YG Entertainment, yesterday.

In the drama, Ku plays Yoon Soo-wan, a legally blind woman who gets her vision back in an operation and decides to embrace life with passion by becoming an emergency rescue worker. Yoon is described as a tomboyish character who still fondly remembers her first love from 12 years ago.

The role will be the first TV drama for the 29-year-old actress in two years, ever since SBS’s “Take Care of Us, Captain.”

The new role reunites Ku with Yoon Ji-ryun, the writer of “Boys Over Flowers,” a 2009 series that launched Ku’s rise to stardom.

“Since I am an emergency rescuer in the drama, I will try to be as well prepared and trained as possible to be convincing,” said Ku.

“I am happy to work with Yoon Ji-ryun again since I had such a good time with ‘Boys Over Flowers.’ I have faith in her.”

“Angel Eyes” will air in April.