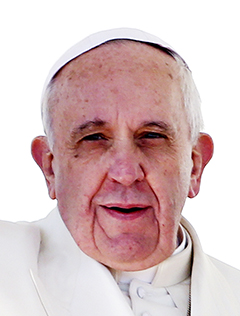 Pope Francis will visit Korea from Aug. 14 through Aug. 18, selecting the nation as his first Asian destination since his inauguration in March last year, the Blue House announced yesterday.

One of the major events he will attend here will be the sixth Asia Youth Day, the smaller regional version of the Catholic Church’s World Youth Day, scheduled from Aug. 13 until Aug. 17 in Daejeon.

On the first day of his itinerary in Korea, the 266th Bishop of Rome will be greeted by President Park Geun-hye at the Blue House. The Pope’s visit to the Korean Peninsula comes 25 years after a trip by Pope John Paul II.

“The Pope won’t be dropping by any other countries either on his way to Korea or on his way back to the Vatican,” said Min Kyung-wook, a Blue House spokesman.

“We expect the visit from Pope Francis, [who is] the symbol of a poor but honest life and unconditional love, to be a good opportunity [for him] to spread the message of love and peace across Northeast Asia,” the Blue House added in a statement.

“Pope Francis’s predecessor Pope Benedict XVI never managed to make it to Asia [during his eight-year term], and Pope Francis choosing Korea as the first country to visit in Asia is very meaningful,” said a Catholic Bishops’ Conference of Korea spokeswoman.

Pope Francis made his first overseas trip as pontiff to Brazil, where the Catholic Church’s World Youth Day was hosted - an event scheduled during his predecessor’s term. World Youth Day is celebrated internationally every two to three years, and pontiffs generally attend as a rule.

But not every Asia Youth Day - which also takes place every two to three years - is attended by the Pope, according to the Catholic Bishops’ Conference of Korea. Francis is also scheduled to visit Jordan, Israel and the West Bank in May, his only overseas trip besides Seoul that has been so far confirmed for 2014.