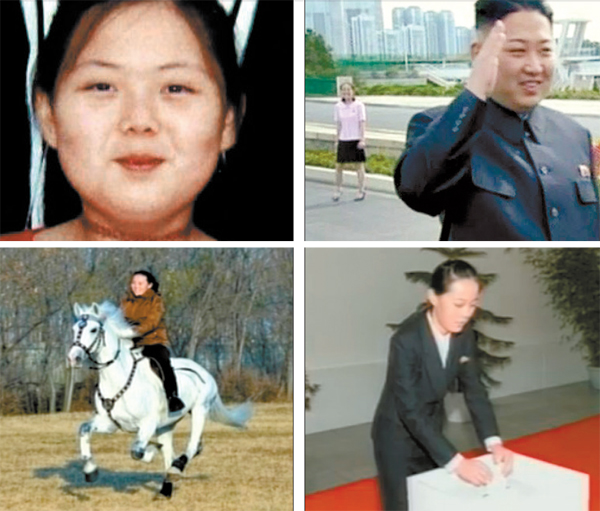 Up: Left, Kim Yo-jong as a student in Switzerland, and right, Kim laughs behind her brother in July 2012 at Pyongyang’s Rungna People’s Pleasure Ground. Down: Left, Kim rides a horse in November 2012, and right, Kim casts a vote in parliamentary elections in Pyongyang on March 9, 2014. [Rodong Sinmun]

North Korea’s 13th parliamentary elections on March 9 made minor international news for leader Kim Jong-un’s election as a representative of the 111th Mount Paektu constituency with “100 percent support from voters in the region.”

But political analysts are far more interested in the emergence of the leader’s sister, 24-year-old Kim Yo-jong, during the polling.

Accompanying her brother to a polling station in Pyongyang, state media described Kim as “a core worker of the Workers’ Party’s Central Committee.”

Some analysts say she is destined to be much more and may be filling the shoes of her uncle Jang Song-thaek, who was purged and executed by his nephew Kim Jong-un in December.

While Jang’s widow, Kim Kyong-hui, younger sister of late leader Kim Jong-il, has not made any public appearance since her husband’s brutal demise, Kim Yo-jong may be taking the place once occupied by her and her husband, who were considered the most powerful people in North Korea after Kim Jong-un.

“She will probably fill the role of aunt Kim Kyong-hui, who used to be a guardian of the leader, and emerge as a royal family member in the so-called ‘Paektu bloodline,’?” said Jeung Young-tae, a senior researcher at the Korea Institute for National Unification under the Unification Ministry.

(North Korea’s Kim dynasty has long tried to tie itself to Mt. Paektu, the sacred, mystical birthplace of the Korean race. Founder Kim Il Sung claimed to have formed his resistance to the Japanese there. Officially, his son Kim Jong-il was born on the mountain, although he was actually born in the Soviet Union.)

“Kim Yo-jong is in charge of all schedules of her brother as well as coordinating every detail of his fashion and hair style,” said a South Korean official in charge of intelligence regarding North Korean affairs, “such as his glasses and elevator shoes.”

Unlike older brother Kim Jong-chol and half-brother Kim Jong-nam, who were passed over as successors to their father, Kim Jong-un’s sister has remained by his side and has been given a political role to play.

According to South Korea’s National Intelligence Service, Kim Yo-jong worked as a manager of the ruling party’s Propaganda and Agitation Department under the alias of Kim Ye-jong. South Korea’s spy agency views her role as building up the political image of Kim Jong-un, highlighting his resemblance to their grandfather Kim Il Sung, the respected founder of the Communist state. Two visits last year by retired U.S. baseball player Dennis Rodman to Pyongyang were organized by the sister, according to the NIS.

A South Korean who frequently visits North Korea said the sister is a de facto secretary for her brother. Word has allegedly spread among North Korean officials that “We should be closer to Comrade Kim Yo-jong in order to approach the leader [Kim Jong-un].”

But Kim Yo-jong watched from a distance, skipped around a garden, and even burst out laughing behind her brother’s back.

At the funeral of leader Kim Jong-il in December 2011, she wandered around by herself.

“She wandered around so much that state television of North Korea edited her out of many scenes,” a Unification Ministry official said.

At the age of seven, Kim Yo-jong started studying in Bern, Switzerland, going by the name Kim Jong-sun. A Seoul official said the passport she used at the time listed her birth date as Sept. 26, 1989. Her studies in Bern overlapped with those of her brother in the same city at a different international school.