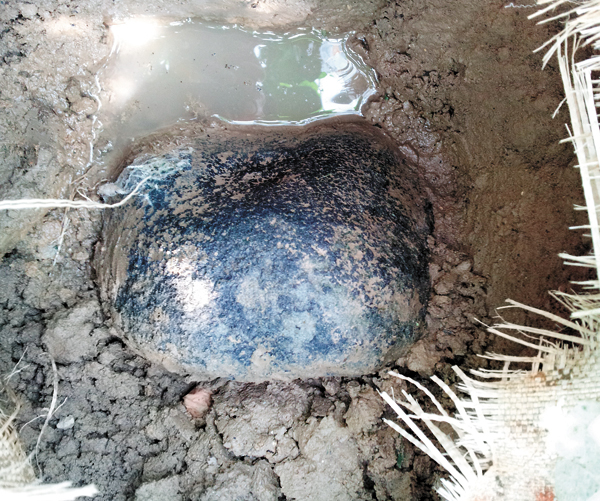 A 9-kilogram (19.8-pound) rock found in a greenhouse in Jinju, South Gyeongsang, was confirmed Sunday to be a piece of a meteorite. [NEWSIS]

After two rocks in Jinju, South Gyeongsang, were confirmed by the Korea Polar Research Institute as chondrites - pieces of meteorites - the region is being inundated with people who want to find their own space rocks, buy space rocks or take advantage of individuals looking for their own pieces of heaven.

“Because it is suspected that a meteorite divided in the atmosphere into more than two pieces, it is still possible that more meteorite [debris] will be discovered,” said an official of the Korea Polar Research Institute (Kopri).

After a meteor shower was observed on March 9, two black rocks weighing about 9 kilograms (19.8 pounds) and 4 kilograms were found by two different locals in Jinju over the next two days. They were suspected to be meteorites. Kopri officials raced to the scenes and confirmed they were chondrites on Sunday.

Local media reported the news from the very start, which touched off pilgrimages to the city at Korea’s southern tip.

You can sell a piece of a meteorite for large sums. Applying the international standard of $5 to $10 per gram, the 9-kilogram rock found last week is expected to be worth up to $90,000.

So some visitors are hoping for a windfall - and others want to take advantage of the visitors.

A 36-year-old man from Busan surnamed Lee said he found a fist-sized black rock with traits similar to the two chondrites found last week only a kilometer from where the 4-kilogram rock was spotted.

According to Kopri and local residents, an American meteorite hunter who introduced himself as Robert had distributed business cards and asked people to sell him any meteorite fragments that are found. That has raised fears of precious space rocks that rained down on Korea being spirited overseas.

“We are considering measures to prevent such leaks by designating them as ‘monuments,’ a kind of cultural asset recognized by relevant law,” said an official of the Cultural Heritage Administration of Korea.

Jinju locals are complaining about the visitors wandering around on their land and even breaking into greenhouses. Some greenhouse owners posted signs warning asteroid hunters to stay away.

Ownership of the rocks is an up-in-the-air issue with no clear local guidelines. That’s not a surprise since the two rocks found last week are the first meteorites discovered in Korea in 71 years.

According to cases in foreign countries, ownership goes to a person who finds meteorites on his or her own land - which means strangers should keep their hands off of Jinju’s space debris.