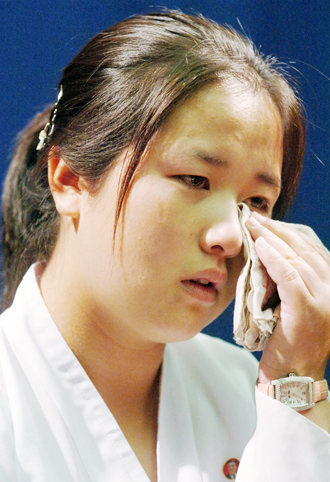 In this file photo, Kim Un-gyong, whose mother, Megumi Yokota, was abducted to North Korea in 1977, dabs away tears while speaking about her Japanese grandparents, Shigeru and Sakie Yokota, during a press conference in Pyongyang on July 6, 2006. [AP/NEWSIS]

The daughter of Megumi Yokota, a Japanese woman abducted to North Korea in 1977, is working with North Korean leader Kim Jong-un’s younger sister, Kim Yo-jong, and is being protected by the ruling dynasty, a South Korean activist working on abductee matters said yesterday.

Kim Un-gyong, the only daughter of the Japanese abductee to North Korea, works alongside the newly prominent sister at “a core organization” in Pyongyang, according to Choi Sung-yong, head of the Representative of the Abductees’ Family Union, a South Korean civic group working for the release of abductees in the reclusive state.

“Kim Un-gyong is a member of the top elite in North Korea, working with Kim Yo-jong in the same department,” Choi told the Korea JoongAng Daily by phone. “As far as I know, they are the same age.”

Choi said the two women both studied computer science at Kim Il Sung University. Allegedly, the sister of the leader recommended Kim Un-gyong for her job and they have been working together.

“The leader’s sister is taking care of her,” Choi said. “That means North Korea appears to supervise Kim Un-gyong. For North Korea, she is a precious bargaining chip in diplomacy with Japan.”

Her mother was abducted by North Korea in 1977, when she was 13, from Niigata Prefecture, Japan, on her way home from junior high school. As the youngest abductee to the North from Japan, she became a symbolic figure for the Japanese.

In 2002, when then-Japanese Prime Minister Junichiro Koizumi visited North Korea for a summit with former leader Kim Jong-il, Kim admitted the kidnappings and apologized to the Japanese leader. Kim claimed Yokota committed suicide in 1994 after suffering from depression.

Yokota’s husband, Kim Yong-nam, a South Korean who was abducted to the North in 1978, married Yokota in 1986. He confirmed her suicide at a press conference in 2006, where he met his mother from South Korea, during reunions of families separated by the 1950-53 Korean War.

In 2004, he sent the remains of his wife to her family in Japan, but Japanese forensic experts said the DNA did not match Yokota’s and was from a male. The Japanese government and Yokota’s family refuse to believe she is dead and have demanded Pyongyang repatriate her.

Born in North Korea, the couple’s daughter, Kim Un-gyong, doesn’t want to return to Japan, Choi said, because she has been thoroughly brainwashed by the Communist state.

On Monday, Yokota’s parents, Shigeru and Sakie Yokota, held a press conference in Kawasaki, Japan, after meeting their granddaughter for the first time in Ulaanbaatar, Mongolia, between March 10 and 14. The couple said they did not ask her whether Yokota is still alive as they assumed she could not tell the truth during the meeting, which was set up by North Korean officials. Yokota’s husband, Kim Yong-nam, did not attend the family reunion.

“She has never been to Japan,” Choi said. “North Korea would never want to send her to Tokyo, not even for a trip, as they worry that the Japanese government would not return her to Pyongyang.”

Pyongyang and Tokyo will have Red Cross talks in Shenyang, China, today, and diplomats from both sides are expected to have a meeting on the sidelines of the talks. The Yomiuri Shimbun reported yesterday that Japanese negotiators will call for more information on Japanese abductees, including Yokota. Why North Korea abducted the Japanese girl is still a mystery. Kenji Fujimoto, ex-sushi chef to Kim Jong-il, said in a memoir that she could have been a Japanese-language tutor for Kim Jong-un.