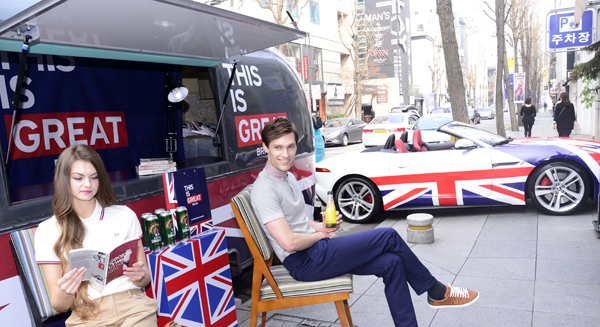 The Great Festival, which kicked off yesterday along Garosu-gil in Sinsa-dong, southern Seoul, offers discounts on an array of British brands. Provided by British Embassy

Wherever you look along Garosu-gil, the trendy street in Sinsa-dong, southern Seoul, you see Union Jacks. There’s a wall covered with images of iconic London landmarks and minivans wrapped in the flag of the U.K. where you can sip ginger ale.

The reason for the sudden explosion of Britishness is because The Great Festival, offering five days of food, fashion and creativity from the home of Queen Elizabeth, kicked off yesterday.

The Great Festival is part of the government-run Great Britain campaign to promote the country, which started in 2012.

During the five-day festival, revelers are able to receive discounts or benefits from 19 British brands or stores located in Garosu-gil.

For example, Accessorize, an accessories manufacturer, is holding a flea market, and Lush, a handmade soap producer, is giving out free shower gel worth 12,000 won ($11) to those who purchase more than three Lush products. Selected pubs are also holding beer promotions, giving free ale to people who purchase three. British food and desserts are also being offered at some cafes and restaurants.

“The whole purpose of this festival is raising awareness of Koreans about Britain and encouraging them to invest in our country and make young students come to Britain for study,” said Scott Wightman, the British ambassador to Seoul.

In addition, there are also several events lined up. For instance, a short documentary about British fashion designer Sir Paul Smith is being screened at Art. C, a cultural complex. You can also enter a photo competition by uploading photos of yourself enjoying the event through the festival’s Facebook page, with the top award being a fully paid trip to London. For more information, visit www.facebook.com/ukinrok.

The festival ends on Monday. Stores, cafes and restaurants that have Union Jack flags on them are participating.