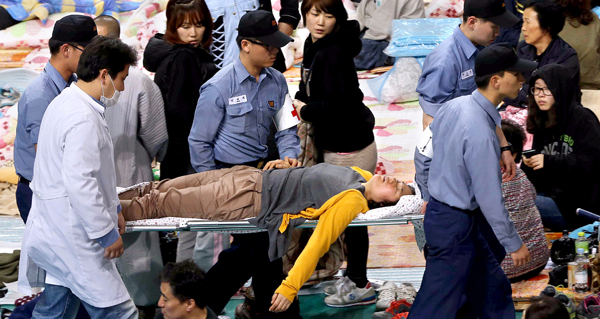 On the third day of the ferry sinking tragedy, an emergency medical team moves a mother who collapsed from exhaustion while waiting for news of her missing child yesterday at a gymnasium in Jindo, South Jeolla. By Oh Jong-taek

ANSAN, Gyeonggi - News that the Sewol capsized Wednesday morning hit the residents of Ansan, a city with a population of 76,000 in Gyeonggi, especially hard.

Of the 475 people aboard the ferry, 325 were 11th-grade students from Ansan’s Danwon High School who were on a spring trip. Accompanying them were 15 teachers.

A blackboard in an empty 11th-grade classroom is filled with chalked messages like, “We miss you,” “Live and return” and “We will definitely meet again.”

The tragedy reaches every corner of the Ansan community, from the stores and restaurants the students frequented to the cram schools they studied in. “My tears have not stop flowing since I heard the news that those students who always greeted me so brightly are trapped in the ferry,” said Lee Seong-jin, a 62-year-old who runs a snack cart near Danwon High. He sells bungeoppang, goldfish-shaped pastries filled with red bean paste, to the students. “The people of Ansan all feel like they have lost their own children,” Lee says.

In Danwon’s 11th grade, 13 students weren’t able to go on the class trip to Jeju Island. They are waiting for their classmates’ returns. “For the second day in a row,” said 11th grader Shim Jin-woo, 17, on Thursday, “I have not let go of my cell phone because I am worried about the safety of my missing friends.”

Fifteen-year-old Jo Do-hyeon is mourning the loss of an older friend with whom he shared after-school club activities: Jeong Cha-woong, 17, whose body was returned to Korea University Ansan Hospital Thursday morning.

“I hope my upperclassmen who are trapped in the ferry do not lose hope until the end,” Jo said Thursday.

Danwon High School’s women’s table tennis team won an annual national table tennis tournament Thursday for the second year in a row. But the team members were overcome with tears as they accepted their prize. Three of the students on the team are 11th graders. They skipped the trip to Jeju so they could compete in the tournament.

“These students worried for their missing classmates and cried all night,” said a table tennis tournament official. “They felt guilty for even participating in the tournament.”

The Ministry of Health and Welfare Thursday said it will extend psychotherapy services, which so far have been provided to only the survivors and families of the missing people, to a range of people living in Ansan.

“We concluded we should look into virtually all people living in Ansan,” said Lee Jung-kyu, the head of the mental health policy department of the ministry, “because we have assessed that we should take a look at more than 1,000 people including first- and third-grade students of the school and families of the missing people, while treating the survivors to prevent post-traumatic stress disorder [PTSD].”

The ministry said it will establish joint psychotherapy teams with other authorities such as the Ministry of Education, Ministry of Gender Equality and Family and National Emergency Management Agency and closely cooperate with them to help people who may have been shocked by the accident.

It has already dispatched a psychotherapy team, which was jointly organized with Gyeonggi government to the Korea University Ansan Hospital, where the rescued high school students are being treated, and another psychotherapy team from Naju National Hospital to the nearest port of the accident for possible survivors and families of the missing people.

Some of the teenage survivors at Korea University Ansan Hospital are reportedly experiencing severe stress and anxiety symptoms. The Health and Welfare Ministry said it will consider employing more medical teams from Seoul National Hospital if needed, while setting up plans to supports to those living in Ansan.

“Not only students but also their family, relatives and friends as well as rescue personnel may suffer from severe stress,” an official of the Korea Neuropsychiatric Association said. “They should be provided with long-term and systematic treatment program.”