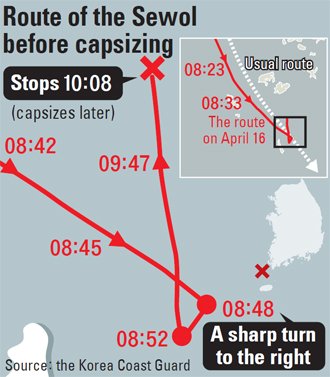 A sharp turn made by an inexperienced sailor was the fundamental cause of the deadly capsizing of the Sewol ferry, investigators said.

According to a joint investigation team by police and prosecutors, the third mate, who was operating the 6,825-ton ferry on behalf of the captain on Wednesday morning, said that the steering gear went out of her control after she made a sudden turn. The Sewol was traveling at a high speed at the time.

“When the ferry was approaching waters near Jindo, I should have slowed the vessel first before making a right turn,” the 25-year-old mate, who is surnamed Park, said during questioning Friday, according to investigators.

“But I made the turn while the ship was running at almost its highest speed,” Park was quoted as saying by the investigators.

“After that, the steering gear swiftly turned by itself,” she said, “and the ship lost its balance and went out of control.”

The investigation team told reporters that the sharp turn by the mate, who has only one year of experience operating a large vessel, appeared to lead to the ferry capsizing.

“Making a sharp turn of a 6,800-ton vessel at the speed of 19 knots is similar to making a right turn in a car running at the speed of 100 kilometers per hour,” Kim Seong-jin, a veteran captain with 10 years of experience in large vessels, said.

Park was accompanied by an assistant sailor surnamed Cho, 55, police said. Captain Lee Jun-seok, 69, was not on the bridge.

“I should have supervised the route as the area was known to be dangerous,” Lee allegedly said during questioning.

According to the investigators, the ferry was traveling to the southeast when Park made the first 90-degree turn to the southwest at 8:48 a.m. Following the turn, the ferry slowed down to a speed of only 6 kilometers per hour and traveled for four minutes.

Then, for unknown reasons, the ferry made a second turn toward the north at 8:52 a.m. and traveled for 1.6 kilometers. At 10:08 a.m., the vessel stopped and started to capsize. The key to the sinking is what happened at 8:52 a.m., officials say, when the second turn was made.

Some maritime specialists assume the ferry was out of control after the first turn, as its speed dropped so fast. The slowed speed meant its engine was not working.

Kim Gil-su, a maritime transport studies professor at the Korea Maritime and Ocean University, said the ferry’s propeller appeared to be broken after the first turn was being made.

“If the ship’s [right] propeller was broken, the propulsion power of the vessel was only on its left side, so the whole body could be tilted to the right,” he said. “After the first turn, the bridge attempted to make a turn to the left, but the broken propeller could have turned the ship once again to the right.”

“She could have stabilized the vessel by making a right turn once again,” Lee Myeong-gyu, a maritime studies professor at Gyeongsang National University, said.

Hitting an underwater rock was ruled out by specialists because there was no damage to the ferry’s underside.

Trying to avoid an obstacle was also ruled out.

Unsecured cargo could also have moved, tilted the ship to the left, another analysts said.

“If cargo slid to a certain side, a ferry can lose its balance,” professor Lee added.

The Gwangju District Court issued arrest warrants for the captain, third mate Park and the sailor who assisted her as suspects in an accidental homicide.

If the captain is ruled guilty of all of those three charges, he could receive a life sentence.