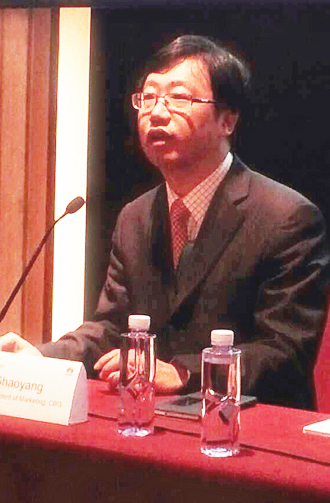 With almost no presence in Korea, Huawei, the world’s third-largest smartphone manufacturer and a leading ICT solutions provider, said it will increase its brand recognition by promoting retail and online sales of its smartphones.

Shao Yang, vice president of marketing for Huawei’s consumer business group, said at a press conference on Wednesday in Shenzhen, China, where Huawei is headquartered, that it plans to produce 80 million smartphones this year, up from the 52 million units it shipped in 2014.

While 70 percent of its business is mobile network carriers and ICT enterprises, and 30 percent is smartphones, Huawei’s new ambition is to become a leading global brand for smart devices.

But the Chinese brand must figure out how to appeal to a wider audience and fight allegations that Chinese origins might reduce a phone’s security in order to catch up to Apple and Samsung.

Huawei has been embroiled in controversy since it was revealed last month that the U.S. government allegedly hacked into the company’s servers last year to monitor its activities. Huawei denied the breach.

“We have nothing to do with political issues, and there has been no problem in the security sector. We are still doing fine in the U.S., and if [the hack] was true, 65 percent of our business abroad would have been lost.

“It is now time for our business to bring value to the world and its consumers. Beyond, growth, we also want to contribute to the people,” said Shao.

“Our focus will be on improving our branding, so we can appeal to people looking for higher-end handsets.”

Huawei has been trying to shift its focus from low-end to mid-range and premium smartphones and tablet PCs.

Huawei said it is too early to enter the Korean market.

“The Korean market is a very difficult and delicate market for smartphones and mobile handsets. Not only is it home to Samsung and LG Electronics, it is a high-end market. Like Motorola and Nokia, if a brand fails in the Korean market, it can have a huge impact,” said a Huawei spokesman.

Instead, Shao said that the Chinese market will be the main focus of the company’s growth this year since it has launched 4G networks in the country.

“Although there are various smartphone brands in the Chinese market and the competition is fierce, I believe Huawei’s smartphone business will have stable growth,” said Yang.

Like Korea, Hong Kong will also not immediately become a key market for Huawei, the vice president said.

“Hong Kong is quite the opposite of Europe. Europe is a stable market and open to new products and brands. It will be hard for us to get our brand sold in Hong Kong, so it could be our next step strategy, not the first step.”

Huawei said that since it is a B2B company it will not spend as much as Apple or Samsung. Yang said the company will invest $300 million in marketing globally.

“We’re not saying we won’t engage in any marketing and advertising activities. It’s just that it won’t be as much as Samsung and Apple, and the advertisements will also be traditional advertisements such as sponsorship of football teams in England, rugby teams in Australia and New Zealand, and advertising on traditional banners,” a spokesman said. “Great products, word of mouth, lower cost and creating new user experiences will be our main strategies.”