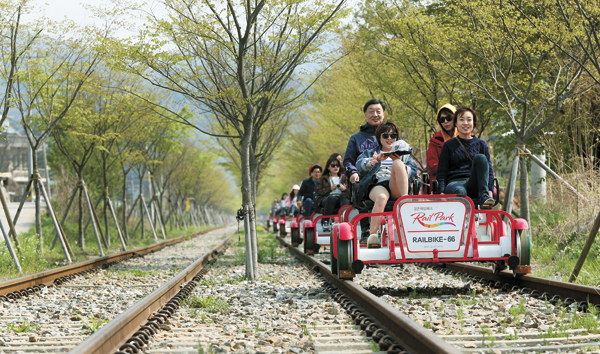 Rail bikes are the perfect way to see all that Chuncheon has to offer. By Ahn Sung-sik

Chuncheon in Gangwon is aptly named for its ties to spring. Chun means spring in Chinese, and the city is the only one in the nation with the Chinese character in its name.

Those who went to college in Seoul in the 1980s and 1990s are bound to have fond memories of Chuncheon. It was a popular place to take a date and a destination for rowdy college initiation trips called MT, which stands for members training. The place is a rite of passage for most, but when the Gyeongchun line was upgraded in 2010, the Gangchon train closed down.

Shutting down the train station led to a decrease in visitors, but the columns of the now-defunct station still boast impressive graffiti art.

Instead of trains, the station is now known for its rail bikes. The ride is popular with everyone from middle-aged couples to teenagers.

The tracks that formerly ushered in visitors on trains are now a test of leg strength for eager couples. The breeze that blows from the Bukhan River is a nice accompaniment, and the picturesque scenery that welcomes visitors traveling by train still awaits.

Bikes from Gangchon Station to Kim You-jeong Station depart every two hours from 9 a.m. to 5 p.m. Although the bike track runs both ways, most of the visitors depart from Gangchon. A one-way trip takes about an hour and 20 minutes.

There are four tunnels on the course and two of them are decorated. If you depart from Gangchon, the first tunnel you will come across is known as the club tunnel. Lights have been installed to give it a party atmosphere, and hits like “Gangnam Style” blast through the speakers.

This tunnel is particularly popular with younger riders, and it’s not uncommon to see people twisting this way and that while pedaling. The next tunnel is called the “Milky Way of Heaven,” where tiny lights flicker on the walls and fog seeps out from beneath the rail.

Trail bikes are also available at Kyungkang Station on the old Gyeongchun line. A round trip is 3.6 kilometers (2.2 miles) and takes you from the station to Gapyeong Railroad Bridge and back. Unlike the Gangchon route, this one has the added thrill of riding over a bridge that is 50 meters (164 feet) high. The bikes depart hourly from 9 a.m. to 6 p.m. Both the Gangchon and Kyungkang routes cost 25,000 won ($24) for two, 35,000 for four. For more information call 031-245-1000. www.railpark.co.kr 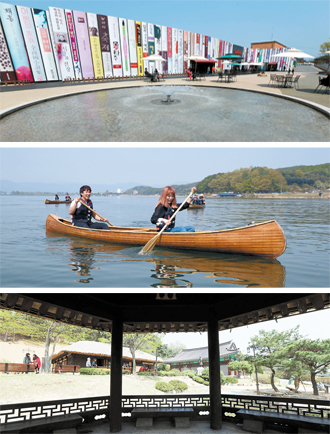 From top: The Kim Yu-jeong House of Literature is a memorial for the deceased novelist, Canoes at Mulle-gil can seat up to two adults and two children at one time, A trail walk along Silla-maeul is a must for all who are fans of Kim’s work.

Chuncheon is a lakeside city. Uiam Lake, which flows out of Soyang River, wraps around the city. Mulle-gil is an attraction that capitalizes on this advantage. Although gil denotes road or oftentimes a walkway, Chuncheon Mulle-gil is a waterway perfect for exploring by canoe. In 2012 the attraction received an award from the Korea Tourism Organization for its innovation. Mulle-gil is located next to Songam Sports Town.

The wooden canoes can accommodate up to two adults and two children at a time. There are four different routes. You can either go to Uiam Dam, Boong-o Island or take a less popular route.

The most popular route is to Uiam Dam because the waterway is the most placid. It’s the perfect pick for beginners, and it takes just an hour to make the 3-kilometer journey.

Most visitors are first-time canoers who are slightly daunted by the prospect of getting into a canoe. But after the first few minutes, it’s easy to figure out how to row.

Flowers on Mount Samak and fishing posts along Uiam Valley will come into view as you gently row along. The halfway point is at the mermaid statue near Uiam Dam.

From May 1 to 11, the Ministry of Culture, Sports and Tourism will hold events for canoe paddlers at the venue. The 7:30 a.m. sessions, which are usually held just on the weekends, will take place during the week, allowing early birds to gain experience rowing through the fog.

During the ministry’s designated week for national tourism, there will also be Chinese or Hong Kong-style dragon boat races, as well as canoe-making workshops. The canoe-making project comes with a hefty price tag of 3 million won. So far, 30 people have made canoes at Mulle-gil. A canoe ride costs 30,000 won (for two adults) and 5,000 won per child. For more information call 070-4150-9463. www.mullegil.org 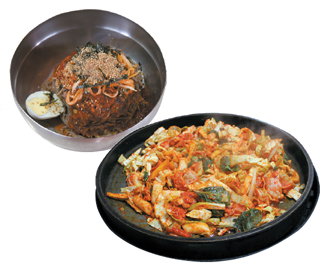 No trip to Chuncheon will be complete without sampling dak galbi (spicy chicken) and makguksu (buckwheat noodles).

About five minutes by foot from Kim Yu-jeong Station is the Kim Yu-jeong House of Literature, a memorial for the novelist who is also the only person in Korea to have a train station named after him.

The station used to be called Sinnam Station, but in 2004 it was renamed in line with the House of Literature, which was established in 2002.

The first thing to find at the House of Literature is a tour guide. Without an expert’s knowledge, it’s hard to get excited about the material on display, since there are not any manuscripts left by Kim. None of Kim’s possessions are on display because his friend and writer Ahn Hoe-nam apparently took all these items and defected to the North just before Kim died.

At the memorial, there are 10 tour guides on hand to assist and offer commentary.

The museum is located in Sillae-maeul with Sillae owing its heritage to the Gangwon dialect for rice cake steamers. Southeast of the town is Mount Geumhyung. Apparently, from the top of the mountain, the town looks like earthenware.

The road that winds itself around the town is 5.2 kilometers long and is called the Sillae Iyagi-gil. There seems to be traces of characters from Kim’s stories along this pathway. There is the “The Place Where Kim You-jeong Ate Fish Stew” where legend has it that Kim stopped by for a drink after he was heartbroken over a girl. Everywhere you look on this road it’s easy to see where Kim drew his inspiration from. As you walk along the road, it feels as if Jeom-sun from the novel “Spring Spring” will jump out at you. Entrance to the Kim You-jeong House of Literature is free. For information call 031-261-4650. www.kimyoujeong.org

People canoe at Mulle-gil, where the Ministry of Culture, Sports and Tourism will hold special canoe events from May 1 to May 11.

The city is also famous for its food. Since 2010, when the metro line to Chuncheon opened, people started making the trip just to get lunch.

Silbi Makguksu is a famous buckwheat noodle shop in Soyanga-2ga. Open since 1965, the place has been deemed one of the best restaurants in the area for nearly half a century.

Although the founder, Lee Tae-sik, is now dead, his son still carries on the family business making the noodles from scratch. The shreds of radish served with the noodles are what made the restaurant famous. The noodles cost 6,000 won. 033-254-2472

Chuncheon’s dak galbi (spicy chicken) is a famous dish even in Seoul. And in the homeland, the place to go is Woomi Dak Galbi at City Hall. Open since 1970, it can be argued that this is the restaurant that spread the love of dak galbi in the alleyways of Myeong-dong in Seoul.

The marinade is made fresh daily and kept in the fridge for seven hours to develop. The fried rice is also a house specialty. It costs 11,000 won per person. 033-257-4705

Chuncheon is easy to reach from the city. Getting to Chuncheon by car from City Hall takes just one hour and 30 minutes.

If you take the ITX Chuncheon from Cheongryangri Station, it takes just an hour. The fare is 6,000 won for an adult.