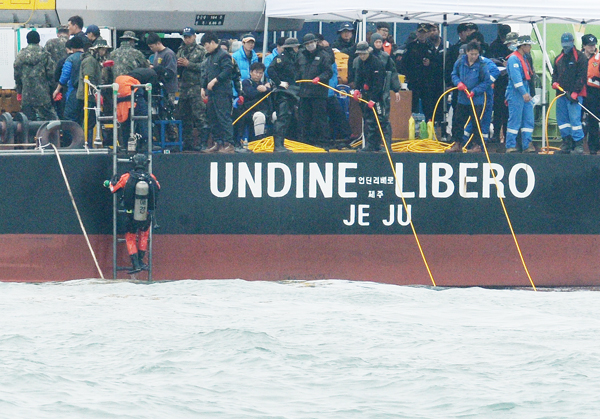 On the morning after the capsizing of the Sewol ferry, the Coast Guard prevented elite Navy divers from searching for survivors for 15 hours.

According to a lawmaker, the Coast Guard prevented Navy divers for looking for survivors because it wanted a private company’s divers to get the first chance to reach them.

The lawmaker, Representative Jin Sung-joon of the opposition New Politics Alliance for Democracy, raised the allegation in a press release Wednesday. He based it on information he received from the National Defense Ministry.

Jin said that on the morning of April 17, around 22 hours after the Sewol started to list in the waters off the country’s southwestern coast, the Coast Guard prevented the Navy’s ship salvage unit (SSU) and underwater demolition team (UDT) from entering the sunken ship. Hopes were still high then that the passengers trapped inside the ferry could have survived the capsizing in air pockets inside the upside-down ferry.

Instead, the Coast Guard waited for divers from Undine Marine Industries, a private company that specializes in offshore and subsea engineering as well as maritime rescue and salvage. They didn’t start their diving operations until sometime later.

According to the report from the Defense Ministry, nine elite divers from the SSU and 10 from the UDT stood ready for rescue efforts at 7:01 a.m. on April 17 when underwater currents were not strong. But the Coast Guard prevented them from carrying out the mission so Undine divers would be the first to reach the capsized ferry.

The Navy divers were not allowed to search until 10:28 p.m. that night.

Divers from the Coast Guard, however, performed rescue operations during the day.

The ministry said the Navy accepted the Coast Guard’s decision to “avoid mutual interference” in the rescue operation.

The Coast Guard is leading the joint rescue effort with the military and civilian divers, many of whom come from Undine.

Jin’s allegation Wednesday added to the growing suspicions about the connection between the Coast Guard and Undine.

In an interview with broadcaster JTBC Tuesday, a sister company of the Korea JoongAng Daily, Kang Dae-hyung, a civilian diver who voluntarily joined the rescue efforts, said an Undine official approached him on April 18 asking him to not bring bodies from inside the sunken ferry because Undine wanted that role.

“An Undine official who introduced himself as Kim came [to us] saying his boss would be greatly disappointed in him if the task [of removing the remains] was done by others,” Kang said in the interview. “Kim came to us again asking us to give Undine some time [to recover the remains].”

The diver said he complied with the request thinking it would speed up the recovery work considering that the company was experienced in rescue work and has cutting-edge equipment. In fact, the company delayed carrying out the rescue work to his bewilderment.

Civilian divers, including Kang, first spotted the remains of three passengers on the fourth floor of the Sewol at around 4 a.m. on April 18. Divers employed by Undine finally removed the remains around midnight, 20 hours later.

The three bodies were the first retrieved from inside the ferry.

As controversy flared over the nature of relations between the Coast Guard and the private company, the Defense Ministry said yesterday, that its report to Representative Jin contained contents that could be misinterpreted.

“Since the sinking of Sewol on April 16, the Coast Guard has been in charge of assigning tasks for divers in the joint military, Coast Guard and civilian rescue team,” said ministry spokesman Kim Min-seok during a press briefing yesterday.

Meanwhile, it has been revealed that Kim Yoon-sang, president of Undine, is a co-vice chairman of the Marine Rescue and Salvage Association (MRSA), a private nonprofit group of retired and serving senior coast guard officials. With the growing controversy, MRSA’s online homepage was shut down yesterday.