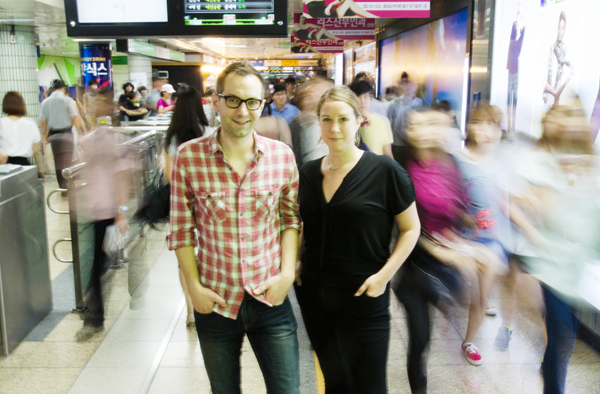 Charlie Usher, left, with his former photographer Elizabeth Groeschen, recently published “Charlie and Liz’s Seoul Subway Travelogue,” a travel book that focuses on Seoul’s subway stations and the areas around them. Provided by Seoul Selection

When Charlie Usher decided to settle down in Seoul in 2009 after circling 34 countries, including North Korea, his first impression was that this capital city had the “cleanest, most efficient and [cheapest]” subway system.

And his journeys didn’t stop here. Since then, he has traveled extensively by metro, after which he decided he wanted to share those memories with the rest of the world.

In his blog, Seoul Sub→Urban, the 32-year-old American presents his audience with vivid descriptions and photographs of the experiences one can enjoy at each subway station around Seoul.

“If you’re just using the subway, you end up missing the city around you,” Usher said. “What we’ve tried to do in this project is to treat the subway the same way you treat an airplane or a train, as a means of transport to a travel destination.

“Then when you get off, the neighborhood is there to be explored,” he added.

Launched in 2009, the blog introduces more than 140 subway stations, guiding readers from each subway exit to a unique endpoint nearby. It goes further to talk about the historical and cultural background of each station’s neighborhood, and “not just the things they talk about in guidebooks,” Usher explained.

With the blog increasing in popularity, Usher recently came up with the idea of publishing his own guidebook, “Charlie and Liz’s Seoul Subway Travelogue” (2014), which covers 31 of the stations he and Elizabeth Groeschen, his former photographer, visited and featured on Seoul Sub→Urban.

The book is a “more literary, less bloggy, more Korean, less Internet-y way,” he writes on his blog, which is written in Korean.

Usher recently added Seodaemun Station on subway line No. 5 to his repertoire three weeks ago, and wrote about Gyeonghui Palace, the National Police Heritage Museum, the Rice Museum and the Museum of Agriculture, among others.

He starts off inquiring why Seodaemun, one of the city’s four major gates, no longer exists in either its original or restored form, informing readers that it was destroyed in 1915.

“Its namesake neighborhood still traces a thread that pulls you through many of the most significant events of Seoul’s past 400 years,” he concludes in his preface.

A reason why Usher grew so fascinated by local subways, he explains, is that “public transportation is pretty useless in most places in the U.S. - underfunded, inefficient and often impractical.”

Instead of driving 10 minutes to buy a cup of coffee at Starbucks, he said he prefers a compact city like Seoul that has good public transportation.

Usher named Dongdaemun, in central Seoul, his favorite area in the city, because as he says he’s never quite figured it out.

“You never run out of markets or alleys to explore,” he said. “The energy of the all-night clothing market is incredible.”

As with his trip to Seodaemun, Usher concludes his posts with a lesson he has learned about history.

“History is understood with hindsight, but it is made blind,” he writes. “You pick up a thread and follow it to where it ends.”

“In Seodaemun, that thread ends here,” Usher continues, “in a stunning summation of where the past 400 years have led Seoul, have me, have led you.”