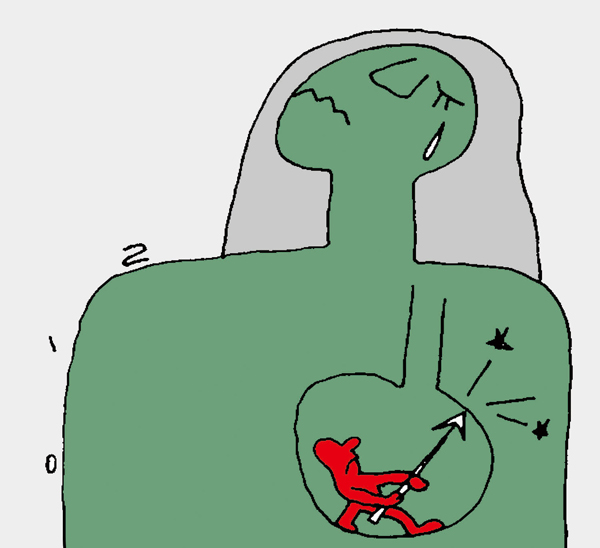 Ppali-ppali (hurry, hurry) has long been a well-known characteristic of Korean culture. The syndrome has contributed tremendously to the fast-growing economy, but it has also brought some negative effects, such as a disregard toward safety.

Stressed by the pressure to succeed in a short time and to grow rapidly, people became accustomed to handling matters with more haste than caution. On that account, egoism and a results-oriented attitude, rather than one that gives credit to process, is prevalent in Korean society. This could result in a tragic accident like the recent Sewol ferry disaster.

While under great strain, people in this nation experience grave emotional distress or unique physical symptoms found only in Korea. Here are some of those indigenous illnesses.

Many symptoms of psychiatric illnesses derive from sociocultural factors, and the Korean cultural context has exerted its influence on the evolution of “fire illness,” or hwabyeong. The term is comprised of “hwa,” meaning fire, and “byeong,” meaning disease.

It is better known as “anger syndrome.” Hwabyeong’s symptoms include tightness in the chest, heartburn, shortness of breath, indigestion and fever all over the body, but the most representative symptom is a sense of fullness in the pit of the stomach or pressure localized in the chest.

Officially registered in the Oxford English Dictionary, hwabyeong has been reported in professional medical circles in the United States as a valid condition and was discussed in the fourth edition of the Diagnostic and Statistical Manual of Mental Disorders (DSM-IV) as a culture-bound syndrome unique to Korea. In other words, stress is the cause of the syndrome, but the occurrence of the illness lies in the unique culture of this nation.

Why is it classified as a culture-related syndrome, and what does it have to do with Korean culture?

Koreans have used the expression “feeling a flush of anger” to describe the physical and emotional condition that occurs when pent-up anger and uncontrollable frustration suppressed for too long explodes outwardly.

Traditionally, it was not acceptable in Korea for females to express anger or resentment in what was a highly patriarchal society. As going through married life involved parents-in-law, poverty and marital discord over decades, women were forced to repress their feelings and they internalized anger or resentment as a result. The unexpressed anger harbored over the years was a ticking time bomb that exploded into fury and rage both inwardly and outwardly when they couldn’t hold it back any longer.

People half-jokingly say, “There is no ajumma [married Korean woman] who does not suffer from hwabyeong,” and this statement is supported by some clinical examinations, as most hwabyeong patients are actually middle-aged women in their 40s or 50s from poorer rural areas.

To find the causes of this disorder, we need to take a look at the unique cultural structure of Korea. Having been a male-dominated, hierarchical society, conventional roles for women were confined to homemaking and being a mother. Women were compelled to be “a good wife,” “a good mother,” and “a good daughter-in-law.”

Among the responsibilities, living with in-laws is the heaviest stress for women. Extreme friction with the in-laws is not only detrimental to health but can also destroy one’s entire marriage.

Due to the social atmosphere of preferring sons over daughters, mothers-in-law were regarded as the main culprit of family discord, as they opted to give their daughters-in-law a hard time in a society that appreciates traditional paternal family values.

Women had to swallow insults if they failed to carry on the family line by producing daughters. They suffered because mothers-in-law would not allow them to retort to a jibe. There was even an old saying that a bride has to be mute for three years, deaf for three years and blind for another three years to establish an amicable relationship with her in-laws.

In modern days, it is not the case of only middle-aged housewives. Male office workers who are under a lot of pressure at work - and pretty much anyone who is too uptight - are equally vulnerable to the hwabyeong syndrome. As the symptoms arise, they deserve attention because they might develop into serious diseases like heart trouble or gastric acid reflux disease.

Have you ever visited a Korean friend after delivery to celebrate the birth of a child? Most Korean moms are bound at home or at a post-pregnancy care center to recuperate after childbirth. This facility is an all-inclusive stay where new moms can rest and receive special care while newborns are looked after by nurses for about three weeks right after childbirth. As this kind of postpartum care facility is unique to Korea, there are unique traditions in postnatal recovery here.

In the West, new moms will take a shower and enjoy some fresh air and a cup of coffee soon after childbirth. But Korean moms would be shocked to see this, because Western-style post-delivery practice is taboo in Korea.

Korean traditional post-childbirth care is distinct compared to Western culture, and the major difference is the concept of sam (three) chil (seven) il (days), which means 21 days, or the first three weeks after delivery.

Samchil-il is the recovery period required for moms as it takes that much time for stretched bones and muscles to return to their original state. During this period, mothers, along with the newborns, are not allowed to go out at all. They must stay in a room without doing any strenuous physical activity because it is bad for their weak joints.

The key to postnatal care is that women should stay warm after delivery. Even during the sweltering summer, new moms should stay away from air-conditioning or fans, even though they are often in desperate need of some fresh air. Koreans believe that being exposed to cold temperatures will cause san-hu-pung. The “pung” in san-hu-pung is the same character used for “stroke” in Korean, but in this case it refers to body ache or joint pain after delivery.

While arthritis is the most common symptom of san-hu-pung, postpartum syndrome patients complain of severe chills and cold hands and feet. They believe they get those symptoms after being exposed to cold air.

Keeping their body warm is a tradition that has descended over the centuries by mothers who have suffered joint pain and numbness of limbs. In a wholly precautionary way, moms wrap up in long sleeves and socks regardless of the season, and they avoid cold beverages and showers for about a month.

Postnatal care traditions in Korea may conflict with and certainly do not derive from the scientific roots of Western medicine. But moms deserve proper - if not intensive - care and rest after delivery to recuperate, and vigorous baby care and household chores can wait for a good three weeks after delivery.

In an ultramodern country, Korean people are affected by emotional distress and physical signs due to the hectic pace of everyday life. They might not be able to stave off some psychopathological disorders native to Korea such as the “high school senior syndrome” against the backdrop of the college entrance exam or the “holiday syndrome,” which heavy-hearted housewives suffer from before and after Chuseok, the family-oriented fall holiday.

Korea is in a grief-stricken limbo now over the ferry tragedy, and its people are consumed by agony, anger and deep sorrow. This time, Korea needs to exert its positive energy with the spirit and will that Koreans are proud of, to tackle depression and overcome adversity in these difficult times.