Excerpts of photographs, above, from “100 Thimbles in a Box ? The Spirit and Beauty of Korean Handicrafts.” The book was co-written by two U.S. mothers - Joan Suwalsky and Debbie Kent - who adopted their Korean children 20 years ago. The text provides easy-to-follow explanations about Korean handicrafts with some 400 matching images.Provided by Seoul Selection

When two U.S. mothers, Joan Suwalsky and Debbie Kent, adopted Korean children 20 years ago, they decided their kids should learn about their Korean roots.

The two began to make regular visits to their children’s homeland to find out more about the country, and they were soon captivated by the beauty of Korean handicrafts.

They started collecting craft items from Korea to decorate their homes and to familiarize their children with Korea’s traditions. However, the more they dug into the field of local crafts, the more surprised they were to find out how little was known about them in the United States. 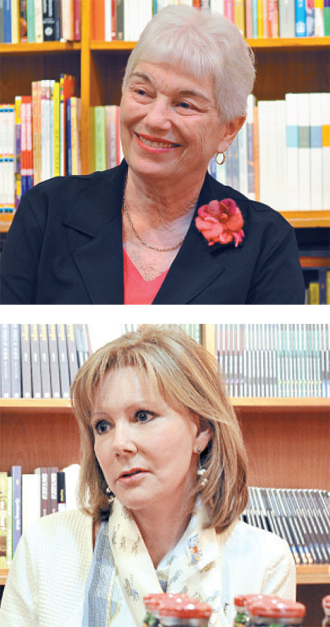 Authors of “100 Thimbles in a Box,”Joan Suwalsky (top) and Debbie Kent.

“We were shocked that back home there was no evidence that this beautiful art existed,” said Kent, a mother of three children - two Korean daughters and a son - in an April 29 group interview held at Seoul Selection’s book shop in Jongno District, central Seoul.

“In the United States, we see a lot of Chinese and Japanese art, but we don’t see any Korean art,” Kent continued.

So these mothers, who have been friends for a long time, decided to write their own book about Korean handicrafts, not only for their kids and other adoptee families but also for the general U.S. public, which is becoming interested in Korean culture.

Their completed text, “100 Thimbles in a Box - The Spirit and Beauty of Korean Handicrafts,” was published in April in English. It covers a wide range of Korean crafts such as metal and wood work, fiber arts, paintings and Korean architecture. It’s the first time that as many as 44 kinds of Korean art pieces have been compiled into a single English-language book.

In order to provide more useful and accessible information, the two mothers visited several Korean artisans, such as hanji (Korean paper craft) and gold-imprinting artists, to learn about the meticulous process of each creation. And that is why the two mothers focused on making the publication “visually dazzling.” 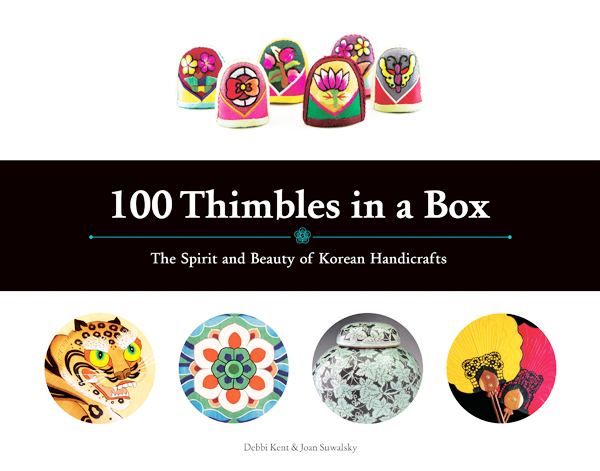 The cover of the book “100 Thimbles in a Box - The Spirit and Beauty of Korean Handicrafts.”

“Books that we found [in the U.S.] tended to deal with each piece of art in too much depth to be introductory books, without any beautiful pictures,” said Suwalsky, a mother of two Korean children.

The book contains about 400 vivid pictures of each Korean art piece. About half of those photos were taken by Kent.

“We wanted to make a book that someone could read two pages of and go to learn more,” said Suwalsky. “People could then explore on their own.”

After achieving a milestone they refer to as “a labor of love,” Suwalsky and Kent already have their minds set on their next project - retelling Korean folklore in children’s books.

“The main thing we want to do is communicate through our books with people about Korean culture, art and sensibility to the extent that we can understand as non-Koreans,” Suwalsky said.