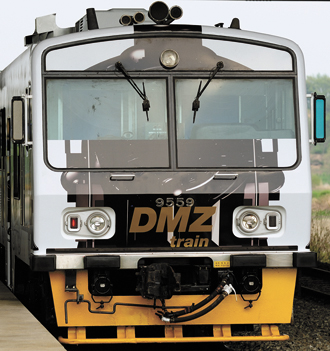 The train to the demilitarized zone run by the Korea Railroad Corporation started service again after a four-year break. The train travels between Seoul Station and Dorasan Sation, which lies inside the DMZ, twice a day.

The service started in April 2002 but was suspended by the Ministry of National Defense in 2010 after one person tried crossing the DMZ into North Korea.

Service resumed on May 4 and the trains depart from Seoul Station at 8:30 a.m. and 1:30 p.m. Returning trains leave Dorasan at 12:10 p.m. and 5:30 p.m. There are 136 seats and 14 standing room positions. The train stops at Neunggok Station, Munsan Station and Imjingang Station and takes 1 hour and 20 minutes.

DMZ-Train, as it is called, is a remodeled diesel train with three cars, each with an individual theme: peace, harmony and love. The cars contain 150 photos about the Korean War and the ecosystem of the DMZ. Each car has screens at the front that show a feed from a camera at the head of the train.

Tickets cost 8,700 won ($8.50) for an adult from Tuesday to Thursday and 8,900 won from Friday to Sunday. There is no service on Monday and holidays. From Dorasan Station, travelers can visit the reopened Dorasan Peace Park and (via bus) the third underground tunnel, built by North Korea to sneak agents into South Korea.

Dorasan Peace Park was constructed by Gyeonggi Province in 2008, which spent 11 billion won. The park includes a museum of the ecology of the DMZ.

Since the station is inside the DMZ, which is under the control of the military, tourists must carry identification and a round-trip ticket.

“We expect DMZ-Train to help the tourism industry and also contribute to peaceful relations between the two Koreas along with the government’s plan to build a DMZ World Peace Park,” said Choi Yeon-hye, CEO of Korail. “It will be a cornerstone for the Eurasia transcontinental railroad.”

During the second half of this year, Korail will operate a new route from Cheongnyangni Station to Baekmagoji Station in Cheorwon, Gangwon, the northernmost point of South Korea’s Gyeongwon line. The station was opened in November 2012.

“It was a comfortable trip to cross the Civilian Control Line by train,” said Yoo Ho-sik, a 37-year-old passenger.

“It was great opportunity for my child to experience the reality of division,” he said.