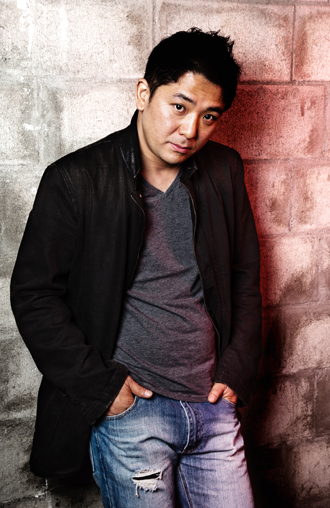 Director Yoon Hong-seung of “The Target.”

To Korean director Yoon Hong-seung, incorporating the importance of family into his movies is crucial. In his most recent work, “The Target,” which was released in Korea last month, he focuses on how relatives can build stronger connections, and how even strangers can become closer when they look after each other’s kin.

The movie, a remake of the French action film “Point Blank,” centers on the character Yeo-hun, who is played by Ryu Seung-ryong, an actor famed for his role in “Miracle in Cell No. 7.” Yeo-hun is on the run from police after being wrongfully accused of murder. He finds himself working with Tae-jun, whose wife was kidnapped by an unknown man.

“Being the youngest child in a family of seven children, I think I have accumulated many thoughts and reflections on family without even noticing,” said Yoon.

The filmmaker, who often goes by the pseudonym “Director Chang,” sat down with Magazine M, an affiliate of the Korea JoongAng Daily.

“Because even people who kill others and drop bombs return to their routines and continue to build friendships and relationships with others, I think it’s important to show that [people go back to their family in the end].”

Yoon debuted as a movie director in 2008 with “Death Bell” after becoming well known for directing music videos.

His second film is acclaimed by critics, proven by the fact that it was invited to this year’s Cannes International Film Festival, which runs until May 25.

Q. How did you feel about making an action film?

A. So the setting, where everything happens within 36 hours, was important. The characters all fight for every second to focus on what they are entitled to do, and they finish what they are doing before a new day comes. I thought such a mind-set would create some tension and that the tension would make the movie speedier in [unfolding its story]. I also focused on that with the editing of the movie, too. The editing director Kim Chang-ju and I set the basic concept of smashing the audience with [fast-changing] scenes.

What did you try not to include in “The Target”?

I tried to [give up making the movie look] stylish. Making a stylish video is something I’m very confident doing because I have much experience making music videos. But I didn’t think focusing on style would suit this movie. I thought the movie would just reach its demise as soon as I tried to make it fancier. I don’t usually like using one take without interruption, but for all the actions scenes I went with one continuous take. Sweat on an actor can be faked, but a red face from being short of breath in [action scenes] cannot be made up. I felt so sorry for the actors, but I filmed the action scenes just like others film a documentary. I tried my best to capture the real expressions on the actors’ faces.

The movie “The Target” was originally planned to be made by another director before the job came to you. How did you feel about that?

I felt under pressure, but I had no other choice but to trust the people I work with and the script. I had great trust in my producer because I’ve worked with him before, and the lead actor, Ryu, who I previously met when working on a music video. It would have been much harder if I were to work with people that I had never met. I joined the team two months before filming started.

What did you change the most in those two months?

I tried to set up some more detailed descriptions of the characters. Song Gi-cheol, played by Yoo Jun-sang, is the character I changed the most. In the script, he was a more serious character. I also suggested making Yeo-hun’s brother Seong-hun a person with a nervous tic disorder.

Stills from Yoon’s latest movie, which depicts the story of a man who is on the run after being wrongfully accused of a murder. [JoongAng Ilbo]

How did you come up with the disorder idea?

The Yeo-hun character, differing from the French original, which made him look more criminal, is a man who is more like an ordinary citizen. I needed to give him the right reason to make him decide to take revenge. I wanted to make him more like a serious caretaker of his challenged brother, as if he is a dad who takes care of his son.

Also, I thought it was too far-reaching for Yeo-hun’s brother to kidnap the pregnant wife of Tae-jun in an attempt to save Yeo-hun. The setting was too much, and then I decided a person suffering from a tic disorder could make such an irrational and impulsive decision. I personally feel friendly toward people who have disorders.

Any reason why you have more sympathy toward people with disabilities?

Now it’s okay, but my son was diagnosed as autistic when he was young. And I lost my mom to Alzheimer’s disease. I know how others look at families with disabled members. I reflected on much of my private family stories when setting up the relationship between Yeo-hun and his brother Seong-hun. I was the youngest in my family, and there is 20-year age gap between me and my brothers. My brothers were always like father figures, so I told Ryu that I wanted Yeo-hun to seem almost like his brother’s father.

In the movie, Yeo-hun worked as a mercenary in East Timor in the past. How did you come up with the idea for this?

It may look like the job was chosen to make the movie more dramatic, but we came up with the job because it is real. In Korea, there are some private companies that focus on the military industry. They dispatch mercenaries who have had special training to East Timor or other countries. I think that the job is intriguing. The leather jacket and shoes Yeo-hun wears in the movie is the type of gear mercenaries wear.

Why did you want Yeo-hun to be described as someone with a lack of feeling?

I think people who are very smart at processing their work can keep a poker face. They don’t even change their facial expressions at all when circumstance make them feel like they might explode [emotionally]. However, I wanted to have Yeo-hun explode with emotion when he catches his final target.

Don’t you think that it might be hard for the audience to sympathize with Yeo-hun because he barely shows how he feels?

The audience needs to meticulously follow the events that happen to Yeo-hun in the movie. I decided that if he showed his emotional side too much early on, it may make him a much less charming character. Also, I wanted him to look like someone who seems very dry [emotionally] but who keeps his pain inside. He has lost his wife and he has a disabled brother. I think people who keep much of their pain inside have a hard time expressing their emotions.

Don’t you think that the chemistry between Yeo-hun and Tae-jun is somewhat weak, even though they had to work together in the movie?

That is the most regretful part. In my defense, there was some limit to making [the relationship] work because the story happens within 36 hours. In the original, the two work together from the beginning and share their memories. But, in this movie, they work separately and reunite in the middle, so it was harder to have them build up [chemistry]. [Based on the setting] the bond between them is about that much.

It feels a little awkward to see Ryu Seung-ryong playing a serious role. Didn’t you worry because he has built up a reputation as quite a comical character recently?

Ryu seems to debate if he needs to make his character comical in the beginning. I considered whether I could make the movie more like a black comedy. But, after all, we agreed that Yeo-hun should be someone very calm and lacking emotion. After the director and the actor agree on how to interpret the character in the movie, things unravel very smoothly on set. Ryu wondered what nickname he would get after this movie, because he received the nickname “dirty sexy” after the 2012 movie “All About My Wife” and “caring dad” after “Miracle in Cell No. 7” last year. He was delighted when I said I would make him charming.

Yoo was the last to be cast for the movie. It looked like he was debating whether or not to take part in this film, so I explained the character to him by acting it out in front of him. He said he thought it seemed fun. We both agreed on the idea that we should make him the most evil character as possible. Although his scenes don’t account for much of the movie, it seems as if he is one of two major characters in the movie along with Yeo-hun.

Your first movie, “Death Bell,” received bad reviews from critics, although it was popular among audiences. What did you learn from that?

I am ashamed of it. The work is something I want to hide, or hide from. At the time, I was so determined to switch my career path to [working in the] movie business. I had the script ready within two months and then went through casting and filming. The script was so weak, and it wasn’t possible to fill the gaps [to make it stronger] during filming. I thought the movie wouldn’t get any recognition, so I was put in a very startling situation when it became popular. Although it was hard to make it work, I didn’t think the effort I put in would amount to getting some positive reactions from critics and audiences. I admitted at the time that the movie is mediocre. I want to forget about it. I want “The Target” to be received as my debut movie.

How do you feel about having your movie shown at Cannes Film Festival?

I feel many different things. I’m so happy, and I feel like I’ve been rewarded for the hard time I have had until now.