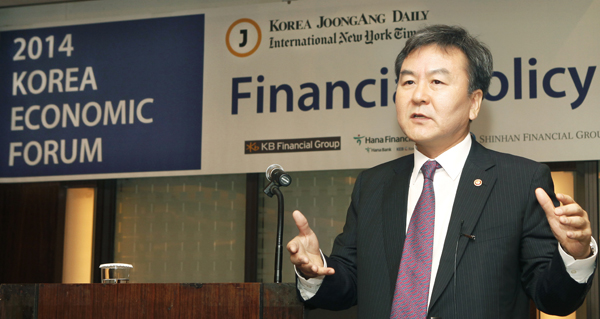 Financial Services Commission Chairman Shin Je-yoon speaks on financial policy for a unified Korea during the Korea JoongAng Daily’s annual economic forum held at the Westin Chosun Hotel in central Seoul yesterday. This is the eighth year of the forum. By Park Sang-moon

The Korean government will help attract foreign capital into North Korea if the regime opens up its economy, said Shin Je-yoon, chairman of the Financial Services Commission, in an introduction to the Park Geun-hye administration’s financial policies for unification.

“It is a good point to think about how to monitor, encourage or regulate investments in North Korea,” Shin said at the 2014 Korea Economic Forum hosted by the Korea JoongAng Daily at the Westin Chosun Hotel in central Seoul yesterday. “But it depends on North Korea’s policy changes.

“For now, we don’t encourage investment, because they don’t have basic legal structures yet. If they open the market to global markets, then we will help them induce foreign investment for development.

“If those kind of basic areas like legal services or consulting services by commercial entities like investment banks are prepared, we will encourage foreign investors to make investments. We are always ready to help,” he added.

Foreign direct investment in North Korea has steadily inched up in recent years, although the inflows remain among the lowest in the world.

North Korea attracted $79 million in foreign investment in 2012, up 41 percent from a year earlier, according to data by the United Nations Conference on Trade and Development.

About 150 foreign diplomats, chief executives and financial institution executives attended the forum to hear the top financial regulator talk on the latest buzzword in the financial world: “unification finance.”

Unification has become a new element of the Park administration’s financial policy in its second year, while the government continues to pursue regulatory reform, consumer protection and creative finance.

Unification finance grabbed attention both at home and abroad after President Park described in an address in Dresden, Germany, in March a gradual economic integration between South and North Korea, indicating that unification is the Korean government’s top priority.

Earlier in the year, the president described unification as a potential “bonanza” that will make the Korean economy take a “quantum leap.” 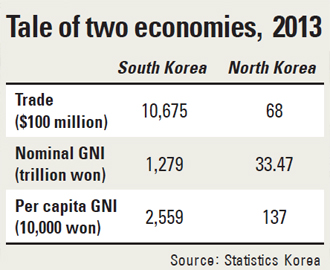 In his first English-language presentation on financial policies for unification, Shin emphasized an “in-between unification scenario” that pursues a gradual economic integration of the two Koreas.

As in Germany’s case, unification can be sudden, led by political changes. On the other hand, as seen in the Hong Kong case, it can be achieved very slowly, mainly through economic cooperation. Shin said neither scenario is what the government is looking at.

“We think a scenario that falls in between the two will be the most desirable and an optimal model for Korea,” he said. “But since we have to guard against any political changes, the government will study hard and prepare measures for every scenario, in case unification arrives suddenly.”

The FSC, the Financial Supervisory Service, the Bank of Korea and the Ministry of Strategy and Finance will set up a task force to prepare for unification, he added.

“First, the monetary system should be reset,” Shin said.

“In the period leading up to integration, the value of the North Korean won should be accurately determined,” he said.

He said the currency conversion should be pursued “simultaneously with economic integration.”

As for the changing the exchange rate regime, Shin said it is “essential to helping North Korea move toward an open market economy.”

For North Korea, which currently maintains a system of multiple currencies and exchange rates, it is important to establish a single and universal exchange rate, Shin explained.

“North Korea should undergo external debt restructuring so it can access the global financial market,” the chairman said. “South Korea should set up emergency credit lines - for example, a currency swap arrangement with the North.”

Shin also proposed setting up a financial infrastructure for the North, including a financial regulatory system, a deposit insurance system and a payment and settlement system.

The Korean government will also help North Korean meet the needs for its development, the chairman added.

“The government plans to obtain basic funding from taxes, sovereign bonds and investment funds,” he said. “It will also encourage domestic and foreign private investors to invest in North Korea, and request funds from international organizations.”

The government plans to set up a policy finance institution to coordinate all steps of the funding process, he added.

“It will request special funds from international organizations, including the ADB and the World Bank,” Shin said.

Shin, who was born in Kaesong, found himself on the same page as the president.

“The topic is very close to my heart,” Shin said. “Unification is an imperative mission for me and my generation.”

As for public worries about the immense costs of unification, Shin flatly said, “Unification is a smart investment.”

He added, “In the short-term, the pecuniary burden will be incurred. But in the long run, unification will pave the way for a strong, sustainable and good economy, which I dubbed a SSG economy,”

The chairman stressed unification will create a combined population of almost 100 million people who speak the same language and share a long-standing cultural and historical legacy, serving as the foundation for a strong economy. The economy will be sustainable because of its young and well-disciplined labor force from North Korea and abundant capital and high technology from the South, Shin said.

A unified Korea will be nuclear-free without an arms race, sparing more money for development and welfare, Shin said.

Since the two Germanys couldn’t prepare for their sudden unification, there were many difficulties, Rolf Mafael, the German ambassador to Seoul, said at the forum.

“In a similar way, the decisions to immediately and fully integrate East Germans into the West German social security system put a very heavy burden both on citizens in West Germany and on the government,” the ambassador added. “Given that the challenge of unifying the two Koreas might be even greater than was the case in Germany, it is indeed imperative for the South Korean government to develop detailed plans and models on how to proceed in case prospects of unification materialize, thus being able to take well prepared and efficient decisions.”

“The four tasks proposed by the FSC chairman are still too broad,” said Kang Moon-seong, a senior fellow at Hana Institute of Finance. “The government should be able to discern what is more important and what is less.”

The analyst said in a recent report that unification of the Korean Peninsula needs a phase-by-phase scenario.

“The first phase is to establish a separated banking system in North Korea,” Kang said. “The second is to introduce a single currency before economic integration of the two.”