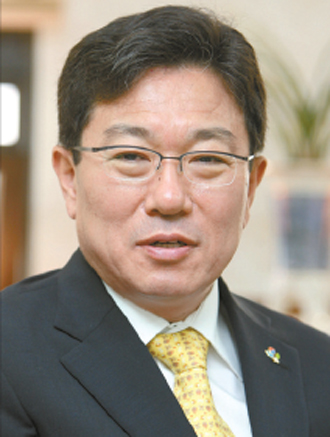 Yoon Sang-jick, the minister of trade, industry and energy, said that the recent installation of Korea’s first nuclear reactor in the United Arab Emirates was a stepping stone toward building more nuclear power plants in the Middle East and Africa.

The minister held a press briefing at Sejong Government Complex to explain the significance of the installation of the first Korean-made reactors overseas and the influence of President Park Geun-hye’s visit to the reactor.

“At the meeting [between President Park and Mohamed bin Zayed Al Nahyan, the king’s brother], they discussed in detail the possibility that Korea and the UAE could join to export nuclear reactors to other countries,” Yoon said.

“They decided that the nuclear power companies from the two countries should make a consortium led by state-run Korea Electric Power Corporation and Emirates Nuclear Energy Corporation, and explore new markets in the Middle East and Africa.”

He named Saudi Arabia and other Middle Eastern countries that have a close relationship with the UAE as potential buyers.

According to the World Nuclear Association, Saudi Arabia plans to construct 16 reactors by 2030 worth more than $80 billion, and Iran announced in February that it plans to build a new reactor.

The minister said the series of memorandums of understanding to manage nuclear plants, in which the two countries will share work forces and training programs, will encourage neighboring Middle Eastern countries to purchase Korean reactors and services. The minister said he hoped that simulation models of the APR-1400 reactor already installed in the UAE would be used to train local staff, which would attract business from neighbors.

Yoon said the operation contracts for the four APR-1400 reactors in Barakah, worth $20 billion, will be finalized by the end of the year. The operating rights of each reactor are worth $5 billion. He added that “all fundamental agreements have already been made, so the government hopes to accelerate the process.”