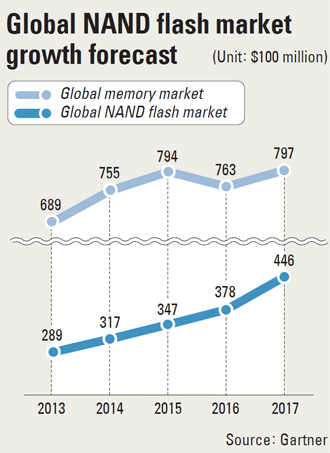 Samsung Electronics said yesterday that it has created a more evolved flash memory after introducing an innovative way of expanding storage space vertically, instead of horizontally, last year.

The world’s largest memory chip maker said it has begun mass producing the 3-D V-NAND flash memory, which has 32 vertically stacked cell layers. It is the company’s second-generation V-NAND, an improvement on its first generation featuring 24 vertically stacked cell layers. Both are produced using the same equipment at the company’s semiconductor plant in Hwaseong, Gyeonggi.

The company expects the new SSDs will have a big impact on the market, as the previous SSDs were used for data centers only, but the new SSDs can be used with high-end PCs.

“We increased the availability of our 3-D V-NAND by introducing an extensive V-NAND SSD lineup that covers the PC market in addition to data centers,” said Jun Young-hyun, executive vice president of memory sales and marketing for Samsung Electronics. “We will provide a consistent, timely supply of high-performance, high-density V-NAND SSDs as well as core V-NAND chips for IT customers globally, contributing to the fast market adoption of 3-D NAND technology.”

The company said the new SSDs have about twice the endurance for writing data of 2-D NAND-based drives and consume 20 percent less power.