Wandering in a wildflower wonderland

Wandering in a wildflower wonderland 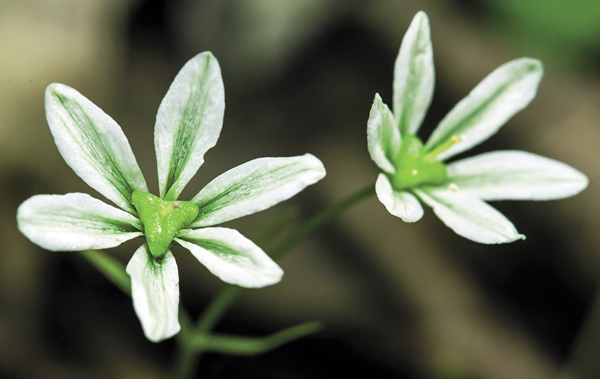 It is always thrilling to find wildflowers when you’re on a journey. But to enjoy the dazzling beauty of those plants, you need to brace yourself for certain nuisances. To take fine pictures of the flora, for example, your camera lens should be macro, while a thick illustrated guidebook is another essential part of a kit to stuff inside your backpack.

From the moment you decide to focus on flowers, the trip, which was supposed to last two hours maximum, suddenly doubles, because wildflowers are scattered everywhere along the road. These plants may be strange and ugly sometimes, but if you take a closer look, each and every species boasts its own unique color, which is what makes them irresistible.

When I was still a young trekker, I remember someone telling me that once a traveler starts to take notice of the flowers, it is then that he can finally be considered experienced.

And come to think of it, these words make sense to me. Eleven years ago, when I had barely launched my career as a travel journalist, my focus lay on the ridges of the dashing mountains. But as time passed, I started to look at the rest of the scenic surroundings. From the mountaintops I was able to see the skies, acres of countryside, welcoming scarecrows and some forests filled with unknown plants. After noticing the forests, I delved deeper, and settled upon wildflowers as my ultimate destination. 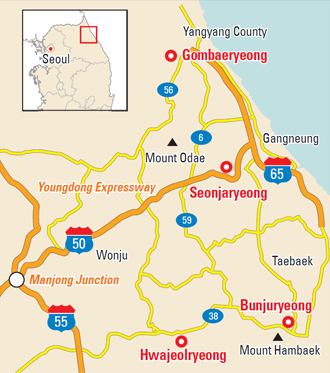 Various kinds of wildflowers can be found in Bunjuryeong, Gombaeryeong, Hwajeolryeong and Mount Hambaek around May to June. The map above represents the signature places to check out those flowers.

The indigenous wildflowers of Korea are just like its people; they are comparably smaller than those in the West. Wild grass does not grow as tall, and the same goes for wildflowers. But however small they may be, those plants bloom most beautifully in my eyes.

The untamed plants are the most lovable ones. Whenever I see blossoming flowers in the middle of a bush, I get mixed feelings, just like a parent who feels proud about his son’s growth but at the same time feels sorry for all the struggles the young one has to deal with throughout his life.

The journey to see and enjoy the wildflowers is all about slowing down your pace and paying respect to Mother Nature. It will take some time for a young wildflower to grow to full maturity. Visitors should therefore always keep in mind that irresponsible steps on the ground could create a disaster on the field.

June is the month of wildflower trekking. Go out to the mountains and the green fields! Then you’ll be able to check out these summer wildflowers in full blossom. The exuberance of Iris odaesanensis and Lychnis coronaria is only available until the end of early summer - around now.

There are four prominent spots in the nation where you can find heavenly gardens filled with rare wildflowers. I’d like to recommend some mountains in Gangwon, beginning from the north, Gombaeryeong in Inje. Seonjaryeong, which cuts across the Taebaek Mountain range, is in Pyeongchang, the Olympic city for the coming 2018 Games. Hwajeollyeong in Jeongseon is located in the south.

Gombaeryeong and Bunjuryeong parks strictly limit the number of entries a day in order to protect the flora. To be one of the first daily 200 visitors to the park, you can book a slot via the Korea Forest Service (KFS) website (forest.go.kr).

Also known as white dead-nettle, Lamium album blooms under nettle-shaped leaves that cast a shadow onto its flowers. When wandering around the dim forest, the hairy leaves of Lamium album pop out and look just like the beard of an old man. That’s how the plant received the title “clown’s beard” in Korean. Though the leaves resemble stinging nettles, they are still edible and harmless.

It isn’t rare to find Astilbe rubra in a Korean forest. Just like its local name “deer’s urine,” Astilbe rubra has some humor. From its roots, there comes the odd smell, similar to the stench of animal urine. But in fact, the odor is not from Astilbe rubra, but from wild boars in the area that prey on the wildflower. I wonder how our ancestors gave the flower such an original name?

Another plant, Thalictrum baicalense, also earned a bizarre name from our ancestors. The Korean name “baical - pheasant’s legs” sounds very random, but the people from the old days thought the thin roots of the flower looked somewhat like the legs of the bird that has long been loved throughout Korean history. The flower can be found at the plateau of Mount Baekdu, North Korea. It is rarely found in South Korea.

In order to take a closer look, you need to bend down to the ground, since Gentiana zollingeri does not grow any higher than a certain level. These particular plants flower in Gombaeryeong, the mountain between Inje and Yangyang in Gangwon.

When summer arrives, you can no longer celebrate the splendid beauty of this flower. Though people spot Iris odaesanensis on photographs, it is very difficult to find it in the forest. Its height barely reaches 10 centimeters (3.9 inches), so you’ll need to stay vigilant when searching for it. It is no wonder people call the flower the dwarf iris.

The blooms of Convallaria keiskei are all about elegance. Because of their refined and graceful form, it is reported to have won great popularity in Medieval Europe. Also named “lily of the valley,” many people have associated the flower with Saint Mary throughout time. According to the legend, St. Mary’s tears transformed into Convallaria keiskei. The flower is widely used as a fragrant base for perfume.

The plain look of Arisaema amurense makes people misunderstand it, thinking it is a common weed, but the flower is widely known for its medicinal use, especially in mainland China. You can find it in the shade of the forest, but be sure to stay away from it: Arisaema amurense is poisonous. When its roots are dried, it can be used to treat coughs and tumors.

Korean legends say that Lychnis coronaria was first born in the spot where a young monk froze to death after waiting for his older mentor who went down the mountain to find something to eat. Lychnis dwells around small temples in the mountains. Just like its Korean name, “young monk flower,” the wide petals resemble the cute smiles of children.

It is always marvelous to see the swaying Arabis on the highlands of a Korean mountain, where the flower’s sheer snow-white color dazzles visitors’ eyes. When the plant is in full maturity, it gets as tall as 30 centimeters, but the petals are still no bigger than your little finger. When you visit a mountain, make sure to get a closer look at this one.