4DX takes cinema to another dimension

4DX takes cinema to another dimension 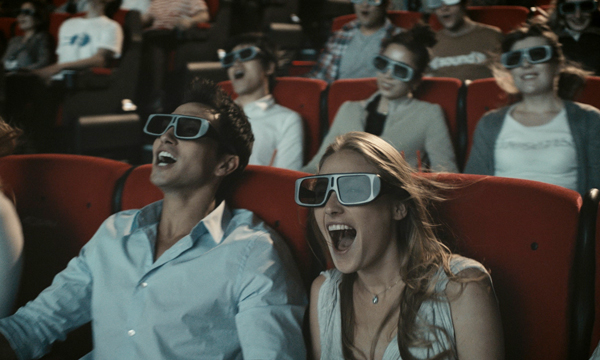 The 4DX motion chairs come in three different movements - heave, roll and pitch - in sync with the on-screen action. Provided by 4DPlex

In 2010, when “Avatar” was re-released in 4-D, Korean filmgoers rushed back to the cinema.

Although the blockbuster was shown just a year prior in 3-D, the temptation to experience it in an enhanced format was just too much.

Top: Choi Byung-hwan, CEO of 4DPLEX, is confident that the technology will win fans over worldwide. Above: Mark Shaw, CEO of the U.S. unit, and Todd Goldstein, chief revenue officer of AEG, at the launch of the first U.S. 4DX theater in Los Angeles.

For the first time, through CJ Group subsidiary 4DPlex’s 4DX technology, viewers could feel a breeze blowing in their faces and the tremors of the Pandora plains, all from the comfort of an air-conditioned room.

Since then, the viewing experience that was conceived for theme parks has gained a following across theaters in Asia, South America and parts of Europe.

With some 108 4DX cinemas in 25 countries, countless Hollywood hits have been given the 4DX treatment by CJ’s 4-D enterprise, and in Korea, 4DX has surpassed the popularity of IMAX.

But the fact remains that the “big markets” - namely the United States and Western Europe - remain unsold on the viewing experience.

Until now, that is. With its first 4DX screening room installed at Regal Cinemas in Los Angeles last month, 4DPlex is hopeful that the technology will catch on.

“Because of the name, people think that it should look like another dimension added onto 3-D and can’t get their head around it,” said Choi Byung-hwan, CEO of 4DPlex. “But 4-D, simply put, is 3-D enhanced.”

In its conversion lab in Los Angeles, 4DPlex adapted 58 films last year, of which 42 were from Hollywood. The modifications work by aligning aspects of the film to the cinema’s custom-built chairs and room effects.

The motion chairs come in three different movements - heave, roll and pitch - while features such as bubbles, lightning and fog emulate an environmental experience or add to anything else that’s unfolding on the big screen.

And with around 1,000 scents in the archive, there is hardly a smell that 4DX can’t replicate.

The screenings work as a joint venture between the cinema, the distributor and CJ.

This means a converted film has to get the all-clear from each party before it screens, and the profits are split three ways. It’s a long and winding road, as Choi exemplified in the case of “Need for Speed.”

“The producers were, of course, the biggest car enthusiasts, and they’d tell us that the vibration of a Lamborghini should be different than that of a Bentley,” said Choi.

After around nine tune-ups, the film got the green light from the producers and screened with varying degrees of vibration.

Currently, 4DPlex’s Los Angeles studio receives visits from movie producers, directors and actors on a regular basis. “They are interested to see how their film is converted,” said Choi.

Among fans of 4DX is “Gravity” director Alfonso Cuaron, who said he wished he’d known about the technology sooner while professing his admiration for the job done on his film.

But while Cuaron was won over by the technology that enabled viewers to experience what it might be like in outer space like in his film, there are those who are less than enthused.

Lee Hyun-jung, who is in her mid-20s, is one of many people whose preconceptions 4DPlex wants to disarm.

Lee feels 4DX is “a bit gimmicky and childish.” More than anything, she said she doesn’t want to be constantly disturbed by something in her face while watching a movie.

Film critic Oh Dong-jin is also not a fan of the technology.

“How dare they spray water on my face? How do you even know if the water’s clean?” said Oh.

Although Choi was quick to point out that the water filters are checked daily to make sure the liquid being sprayed on viewers is high quality, Oh thinks that the effects are not what will keep the new experience afloat.

“Sure people may be drawn to it at first, but what makes a great film is not 4-D effects,” said Oh.

The critic believes that 4DX may stunt creativity by inhibiting viewers from tapping into their imagination.

One of the biggest hurdles that 4DX faces is mediating between a film experience and an immersion that leaves a bad taste in the mouth. The line between a simulation ride and a film is a thin one.

“In Mexico, they actually ask us to put in more movements so that it’s more like a ride,” said Choi.

“But we are also mindful of complaints, it can be annoying wearing the glasses, having things sprayed onto you, and sometimes the effects don’t reach everyone in the cinema.”

4DPlex is taking note of feedback. For example, the company has installed on-and-off buttons into the chair for the water spray feature.

And because each country has its own preferences, effects for movies are developed differently by region, making 4DX a very personal experience.

With its new 4DX room installed at the Regal Cinemas L.A. Live Stadium 14, the tally of countries that house 4DPlex’s cinemas is now up to 25. An Indian opening, penciled in for later this month, will take the tally to 26.

Although the technology has a strong representation in Asia and South America, the U.S. opening signals a milestone for 4DX. And there are also plans for theaters in the works to be implemented in the United Kingdom and Switzerland to open later this year.

“When you look at cinema chain rankings, the United States stands from second to fourth on the list,” said Choi, on why 4DPlex is aiming toward the American market fervently despite the fact it’s already doing well in the rest of the world.

And while it’s just one cinema, Choi is hopeful that the technology will prove its worth and help accelerate expansion in the developed world, after having courted cinema chains there for the last two to three years.

“To them [U.S. and Europe], Korea is a very small place and before they sign they want 100 percent proof that it’ll be profitable.

“You could say that the film industry is the biggest closed market. Those in it are conservative and have a lot of pride in their heritage as leaders in the field,” said Choi.

But often, these cinema chains are just mirroring their viewers’ opinions.

Damon Wise, a contributing editor at Empire magazine, said that 4-D “is still a mystery to most U.K. moviegoers,” and thinks it’ll be some time before the British get used to the format.

Unlike the Asian audience, who may be more open to new experiences and technology, Wise thinks U.K. cinemagoers need more time to get used to the idea.

“For many, this kind of experience is more closely associated with a theme park ride and it will take quite a lot to convince them that it’s more than a novelty or a gimmick,” said Wise, who thinks part of the reason why the technology is not taking off is because it’s entering into a saturated market place with no distinct advantage.

Helen O’Hara, also from Empire, has experienced 4DX, and although she “quite liked it,” she is still unsure how the format will bode.

But she does think that there may be a solution to fix the preconceptions people in those countries might have.

“I think that if filmmakers were involved in designing the 4-D experience you might see something that was better designed for it,” she said.

But O’Hara also points out that there’s an irony to this.

“That would only happen if 4-D became a much more popular way of viewing films,” she explained.

In some ways, 4DPlex may do better going after China as this was where the company launched its first overseas cinema.

Growth there is also rapid. Choi said that with the Chinese market booming, lines are out the door at the 4DPlex office in Beijing, where film personnel come to see what all the fuss is about.

But 4DPlex knows that China will not be the be all and end all.

“The most important thing is the U.S. because it’s such a big market and where one-third of box office sales come from,” said Choi.

He knows how important it is to secure the right kind of film, and this may be the key to 4DX taking off.

Wise agrees that hope for 4DX may be found in the right film. “In the same way that Avatar reintroduced 3-D … I think it’s only a matter of time before a film is tailored to suit 4-D,” he said.

“It remains our homework to think about the genre of films to play on 4D,” Choi explained, who thinks there’s room to develop non-action films.

“It’s not that we necessarily prefer action films, but from a cinema’s point of view, they want action films to play in 4DX. Even if it’s not action but we think there is room for immersion, 4DX is keen, that’s what we’ve been concerned about at CJ. How do you make the movies a more immersive experience?”

“We’ve been thinking about 4-D since the 90s. While we were building our multiplexes, CGV was asking, what’s next?”

And with advertisers seeking out 4DX coupled with expansion in the United States and the U.K., Choi is confident that the technology will catch on.

“There are those in the 4-D business in China for example,” said Choi, “but of course we are way ahead in the game.

“We know that currently we are No.1 in the market due to the lack of competition, but we aim to be up there even after the market becomes saturated.”