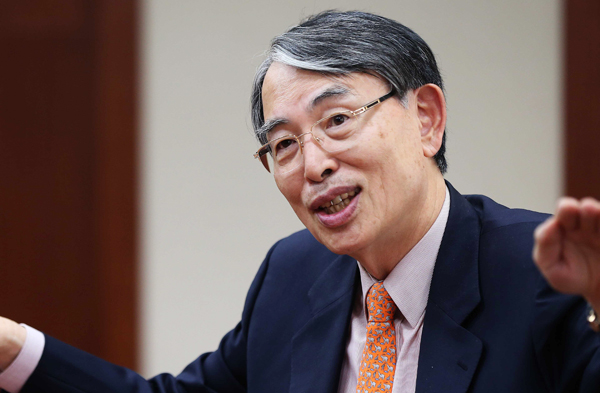 Song Sang-hyun is the president of the International Criminal Court (ICC), headquartered in The Hague. By Oh Jong-taek

“Asian values? That’s just an excuse for human rights problems,” said Song Sang-hyun, president of the International Criminal Court (ICC), headquartered in The Hague. “A universal value such as human rights should not be applied differently because it is Asia.”

Song, 73, sat down for an interview with the JoongAng Ilbo on Tuesday on the sidelines of an international legal symposium at the Supreme Court in southern Seoul.

He pointed out a considerable number of Asian countries that try to refute criticism by the international community on their human rights records by claiming that they have their own “Asian values,” and shouldn’t be evaluated by Western standards.

When asked how he views South Korea’s level of human rights, he replied, “It is uncommonly high in terms of Korea’s economic development and political freedom. However, as much as it has achieved, Korea has been lacking in giving back. Though it boasts economic development, it is embarrassing that [Korea] consistently takes a passive attitude when the international community requests it to meet its share of humanitarian responsibility to match its economic power.

“Though it is hard-earned money, [Korea] needs to know how to donate to international human rights,” he added.

Song was elected to the first bench of the ICC, the only internationally independent permanent tribunal with the jurisdiction to try crimes against humanity. The court was founded in 2003.

In 2009, Song was appointed as the first Korean ICC president. He was re-elected for a second three-year term in 2012, which comes to an end in March.

“Rule of law is closely related to how we earn our bread and live,” he said. “For Korea’s livelihood, there has to be many foreign investors. If there are investments in Korea and then there is a labor problem because of a tax law revision, and then they have to pay higher tax rates, foreign investors can only trust the courts.

“If judges are subjective and cling onto patriotism and only take the Korean side, it might be good in the short term, but ultimately the situation will worsen. The rule of law has to be established, and judicial officials have to firmly protect it.”

Last month, the ICC said it will not formally investigate two North Korean attacks on the South in 2010.

After a preliminary probe, the court prosecutor said there was not enough evidence to initiate a full-scale investigation into Pyongyang’s shelling of Yeonpyeong Island, which killed four people. In regards to the North’s torpedoing of the ROK Cheonan warship, which killed 46 sailors, the prosecutor said that civilians were not purposefully targeted.

“As a judge on the appellate court of the related case, I am not in a position to speak on it,” Song said. “However, if you see the ruling, there were three to four years of investigation, but based on the material from the probe, it would be difficult to stipulate [the attacks] as a war crime.

“Though South Korea actively cooperated during the preliminary investigation, the investigation in regard to North Korea was lacking.”

He added, “If the right conditions are met, there is the possibility of a reinvestigation.”