Clockwise from top left: Macaroni cheese balls from Linus’ Barbecue; ribs and side dishes; and deepfried ribs. The ribs were cooked for six hours and the corn is grown by the restaurant. By Park Sang-moon

Barbecue is a familiar food in Korea, but the southern U.S. style of preparation is not so prevalent here.

The method - and therefore the taste - of Korean-style grilling differs from the barbecued meats eaten in the American south, which is often considered the birthplace of this cuisine.

So just what is the authentic taste of barbecue?

Linus Kim, a Korean-American who just opened a new barbecue restaurant - Linus’ Barbecue - in Itaewon, central Seoul, has an answer for that. 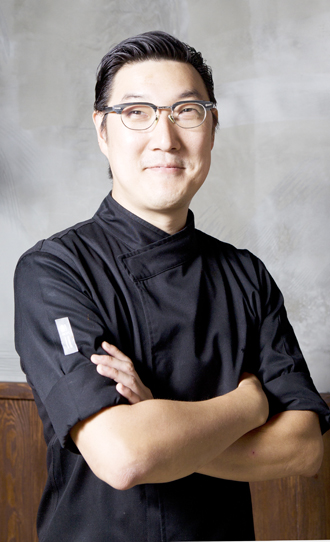 “Barbecuing is smoking meat slowly,” said Kim, 39, who was born and raised in Alabama, considered part of the “deep south” of America.

“It’s just smoking. With the smoking, there’s a special flavor.”

In order to achieve this distinct taste, meat is cooked and smoked at a low temperature for up to 17 hours, depending on the cut.

“The cooking technique is a little bit different from place to place, but the old, traditional style is to dig a hole in the ground, put charcoal or wood in it and cook over the pit,” said Kim.

“Now we have smoking machines, but we still call them pits.”

Kim used to smoke his meat with hickory back in the States before cooking it but now he mixes it with other ingredients because hickory is hard to get here.

“I mix hickory with chestnut, peach or apple wood, which add a sweeter taste [to the meat],” he said.

Kim, who aspires to be a pit master, is a member of a barbecue team called Party Q, which won first place at the Memphis in May World Championship Barbecue Cooking Contest for hog in 2009.

The competition is one of the barbecue world’s largest and is often dubbed the “Super Bowl of swine.”

Kim has also participated in the competition as a special judge.

“It is a very interesting technique of cooking,” Kim said while he moved between the hall of his restaurant and its backyard to check on the meat, where the smoking machines are located.

“That’s why people love barbecue. I’ve never met a person who doesn’t like barbecue - except vegetarians. I can put my hand inside a (well-barbecued) pork shoulder and it doesn’t even resist.”

Barbecue was Kim’s favorite food when he was a young and picky eater, but he didn’t really think of seriously developing his love for barbecue into a career until he moved to New York after graduating from college in Atlanta.

While pursuing many different jobs - from working in telecommunications to real estate - Kim found himself eating a lot of barbecue. But only a few places pleased him.

“I moved to New York City, and the barbecue was terrible,” said Kim. “They may have it there, but it’s not the same as in Alabama, Georgia, Kentucky, Texas, South Carolina and North Carolina, which are all places that are famous for their barbecue.”

But it was a visit to Korea in 2011 that made him begin to focus on barbecue.

“While I was here I made my barbecue machine, and people liked it,” he said.

Kim then began to learn as much about barbecue as he could.

“There’s no culinary school for barbecue,” Kim said. “You can go to seminars, but you can’t go to the Culinary Institute of America for it. It’s part of a lifestyle; you have to find someone who can teach you.”

Eventually, Kim had read everything he could about barbecue and had even gotten in touch with masters of the culinary craft like Mike Mills and Almeda Stutts to learn more.

While he was educating himself on the subject, Kim held barbecue pop-ups in Los Angeles and Seoul. After two or three years hosting pop-ups, he finally opened his eatery in Itaewon.

But new restaurants are a dime a dozen in Seoul, especially in Itaewon, and sometimes adapted versions of foreign food are more acceptable to locals than the original cuisine.

A majority of Koreans are already familiar with ribs from chain eateries such as Outback Steakhouse or TGIF, and most also grill meat on charcoal in the Korean way.

When asked how local Koreans react to his barbecue, Kim said, “It’s very tasty food, even to people who don’t know that kind of food. And I always try to explain the long and special process.”

For example, well-barbecued meat looks burnt, but Kim explained the black on the meat is part of the barbecue style, rather than cancer-causing agents.

“When I prepare the meat, we put some sauce on it and the sauce has a lot of sugar,” explained Kim. “Don’t worry. It is supposed to be like this. It’s flavor. It’s not burnt; it’s caramelization.”

Kim added that Koreans will love American barbecue because they are adventurous eaters who consume animal parts such as chicken gizzards.
Since food was scarcer in the old days, Koreans developed all sorts of cooking techniques to make unpopular animal parts such as cow intestines and pig heads edible. Kim believes the roots of Korean food are similar to the roots of original American-style barbecue in that sense, because it was synonymous with poverty.

“Americans only eat certain parts [of the animal] that are good, and the other parts go into the garbage,” said Kim. “These parts went to poor people who took them, cooked them for a long time and added sauce.”

Sauce was mostly used to cover the smell of low-quality meat.

Yet barbecue has evolved, and Kim believes it’s now a distinct culture.

“I hope I can make barbecue competitions using U.S. standards and get a team here to go to the States someday,” he said. “Personally, I feel like it’s a movement because barbecue is about more than food.”