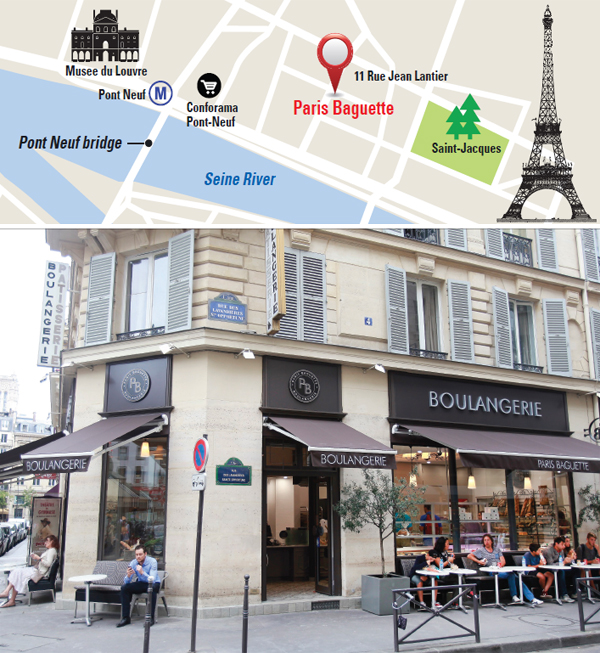 Paris Baguette’s first bakery shop in the French capital. The boulangerie owned by Korea’s largest bakery chain operated by SPC Group is located in the heart of Paris near Chatelet subway station. Provided by the company

Paris Baguette, the country’s largest bakery chain owned by SPC Group, opened its first store in the heart of the French capital on Tuesday, a move it had long desired during its 26 years of operation.

The new store in Paris, which the company considers its global flagship store, is located in the 1st arrondissement near Chatelet subway station. The station is in the center of Paris, near landmarks such as City Hall, the Notre Dame Cathedral, Pont Neuf bridge and the Louvre Museum. The 200-square-meter (2,000-square-foot) store has 46 seats.

The baked goods the Paris branch will sell are slightly different from those at Paris Baguette shops in Korea. The new location will sell mostly pastries and sandwiches, which are popular among French customers. The bakery will also have unique products such as fresh cream chiffon cakes and stuffed breads to give European consumers a wider variety.

“We regard France as the spiritual home of our bakery products and the opening of our Paris store highlights our commitment to continually improve and perfect the quality of our European-style breads and pastries,” Hur Young-in, chairman of SPC Group, said in a statement yesterday. “The opening of the Paris store, which joins our international stores in China, the United States, Singapore and Vietnam, represents a symbolic turning point for Paris Baguette as it aims to become the world’s leading global bakery brand.”

The bakery chain with more than 3,000 stores in Korea said that it has hired experienced bakers from France to work at the store and also sent Korean bakers to train them using Paris Baguette’s traditional recipes. However, only French ingredients are used to make goods in the Paris store. The Paris logo is different from the one in Korea; instead of a blue and white logo, it is a brownish-gray color to match its surroundings, most of which are old buildings.

“Paris Baguette has been introducing authentic French-style baked goods to Korea, but in the future, Paris Baguette will actively reach out to the global market as it leverages its experience in France,” Chairman Hur said.

Now that Paris Baguette has opened a store in France, the company plans to expand into other parts of Europe.